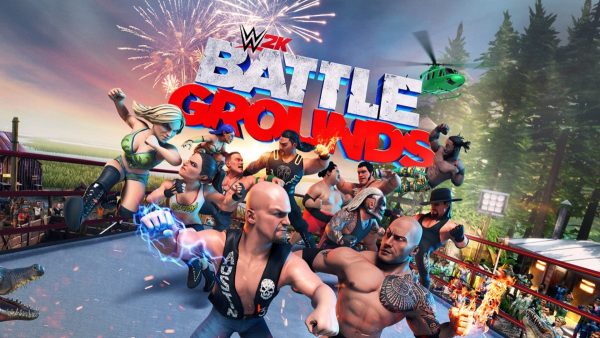 Many fans of the WWE 2K franchise had been hoping it would take a year off following the release of last year’s shambolic WWE 2K20, and between the game’s poor reception and the realities of developing a new video game in 2020, the planned WWE 2K21 was indeed eventually cancelled.

But this isn’t an entirely fallow year for the series, with 2K putting out an arcade-style romp to plug the gap. While evidently cobbled together quickly and struggling to entirely evade the whiff of a mobile game given the AA upgrade, WWE 2K Battlegrounds’ unassuming quality is likely to disappoint few.

And you know what? It’s not a bad game; the worst thing that could be said is that it’s unambitious and a little greedy. With an over-the-top gameplay style and aesthetic reminiscent of 2011’s WWE All Stars, 2K Battlegrounds at least has the good sense not to take itself too seriously, and to that end may earn a decent share of forgiveness, even goodwill, from fans – especially as 2K isn’t charging a full AAA retail price for it.

Core in-ring combat is incredibly simple, lacking the more convoluted control setups of the core WWE 2K titles; you can grab, kick, punch, perform specials, pick up objects, and pin. There’s not much more to it than that, but in the quest to spruce things up, the in-ring sparring is also in no way tethered to reality; you’re able to hurl opponents 10 feet into the air and then punch them another five, because why the hell not? 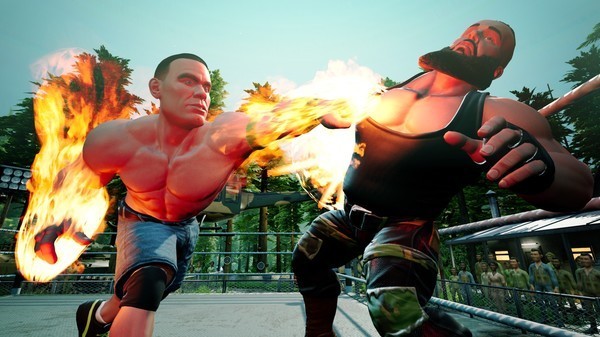 Players fill up a heat bar by mounting an offense against their opponents, allowing them to pull off special moves and flex power-ups (such as damage-dealing flaming hands and health boosts), before building up to a devastating finisher.

An arcade-y wrestling game is certainly welcome in the era where photo-real “simulation” sports games tend to feel rather joyless, though it does also have to be said that WWE 2K Battlegrounds isn’t a game which sustains interest for extended periods. Rather, it’s better thought of as a bite-sized excursion to dive into for two or three matches every now and then, because there’s desperately little to its simplistic beat ’em up mechanics.

Playing against the CPU quickly becomes a dull slog, especially during the programmatic 1v1 matches which make up the bulk of the Campaign mode. What passes for a story mode here is presented through a series of 118 stages, many of which aren’t actually matches at all but either cheap-looking comic strip story beats – which, to their minor credit, are ridiculous – or the rewards received for winning matches. 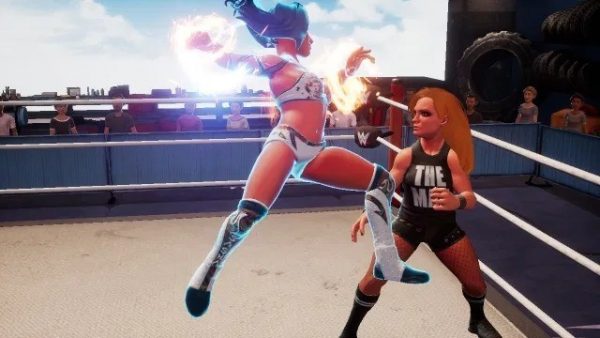 Sadly this mode is only fractionally more interesting than base exhibition matches against the CPU, even with the player assuming the persona of several absurd fictional wrestlers throughout. However, the generally breezy, straight-forward gameplay at least ensures 1v1 matches only last a few minutes – or far less if you’re savvy enough to force a count-out – and so the entire campaign can easily be cleared in a casual day of play.

The campaign also allows you to level up and unlock wrestlers, arenas, and other peripheral gumph, at which point it becomes clear just how much of a grind it is for players to obtain everything the game has to offer.

True to form for the series, WWE 2K Battlegrounds is clearly constructed with a heavy consideration towards microtransactions. The game has two currencies; Battle Bucks, which are earned by playing and can ultimately unlock all game content, albeit only by slogging it out over-the-odds. Then there’s Golden Bucks, which can be bought with real money and effectively speed up all those pesky unlocks. On release day, you could buy 6500 Golden Bucks for £39.99, and for context, wrestlers cost between 75 and 300 Golden Bucks each. 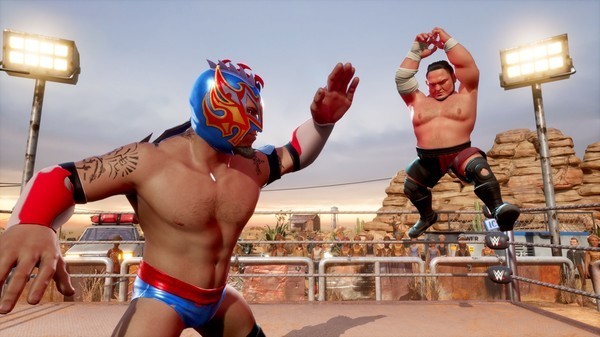 This will frustrate many considering that only around one-third of the 70-wrestler roster is unlocked to begin with, and for anyone unwilling to part with more cash to speed the process up, you’ll need to battle through potential dozens of matches to access the more high-prized superstars. Mercifully, some wrestlers are at least unlocked simply by beating them in the campaign.

The money-grubbing regrettably bleeds into other aspects of the game also, such as the online Tournament mode, which charges premiums for players to unlock various brackets. You’ll not only have to pay potentially thousands of Battle Bucks just to unlock a tournament, but you’ll also need to make additional payments during later stages of said tournaments.

Online matchmaking is, at least, a bit of a step up for the WWE 2K brand, given the typically lag-heavy shambles the mainline titles have been for years. Playing against humans is infinitely more enjoyable than taking on the CPU, as is most abundantly clear in the game’s most inspired mode, King of the Battleground; a never-ending online Royal Rumble in which players receive rewards based on how long they’re able to survive before being thrown out of the ring. It’s a mode clever enough that it clearly needs to make a comeback in the series proper. 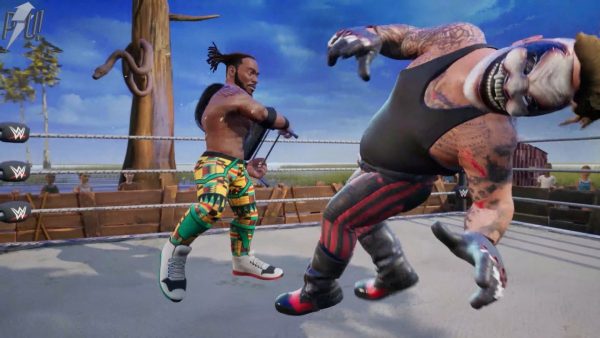 Elsewhere, there are most of the typical wrestling game trimmings here, including Create-A-Wrestler – complete with a 174-stage campaign – Create-An-Arena, and gendered Exhibition modes in which you can free-play any of the game’s match types (including Tornado Tag, Royal Rumble, Gauntlet, Triple Threat, and Cage Match).

The Cage Match actually aspires to be surprisingly clever, as players don’t gain the ability to exit the cage until they’ve participated in a mini-game where they need to grab various bags of money that hang from the sides. This builds a bar which, eventually, allows them the opportunity to escape. Though the fact that opponents can effectively grab you from the ground is both weird and frustrating, it’s still one of the game’s few modes which actually feels tense and exciting.

The half-formed approach to the core gameplay, however, earmarks a game that feels frantically rushed to market in order to appease investors. Presentationally, menu images and text look cheap and unfussed, and this also transpires into many of the in-game visuals. 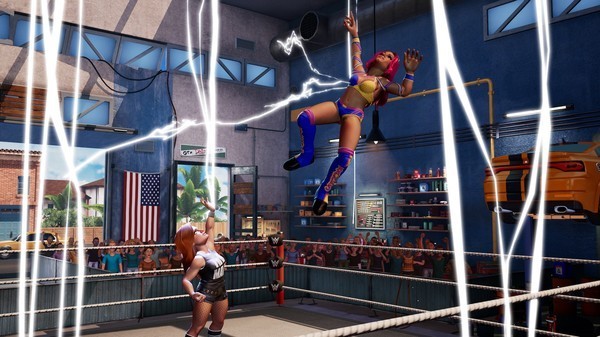 Though the graphics certainly aren’t terrible – the action figure aesthetic has a degree of charm – some of the character renders look hilariously off, while I encountered many clipping and animation glitches during my time with the game. Sometimes a fighter will even disappear off the screen for a few fractions of a second for no discernible reason.

It’s certainly par the course for WWE 2K games at this juncture, though decidedly less egregious than the more mechanically complex core games. The issues are also offset, again, by how utterly not-serious the game is about itself, underlined by some of the charmingly daft arenas, best of all an Everglades setup in which players can literally throw their opponent into the waiting maw of a crocodile. Meanwhile there’s very little worth mentioning aurally; the only thing more repetitive than the listless commentary, which I suspect was recorded in an afternoon, is the gratingly generic menu music.

All in all the game doesn’t capture much of the feel of the WWE product, which despite its intentionally heightened, outlandish tenor, is still quite a shame. From astoundingly lame entrances for the roster – amounting to them exploding out of a crate (!) and posing at the entrance for 10 seconds – to some roster members not even having their actual finishing moves on offer, it further evokes the vibe of a “premium mobile game.” 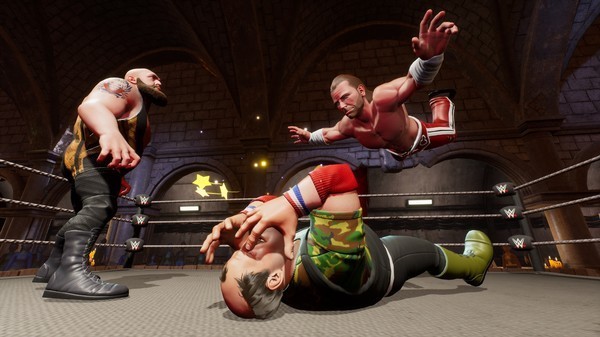 In fairness, though, few were ever going into this expecting a content-rich title on par with the main WWE 2K output, yet the irony is that by setting its goals more modestly and charging a more appropriate price – microtransaction nonsense notwithstanding – WWE 2K Battlegrounds is all the better for it. Or at least, less of an insult.

WWE 2K Battlegrounds delivers shallow yet fitfully enjoyable, bite-sized mayhem, even as it feels unmistakably slung together in a hurry.

Reviewed on PC (also available for PS4, Xbox One, and Nintendo Switch).