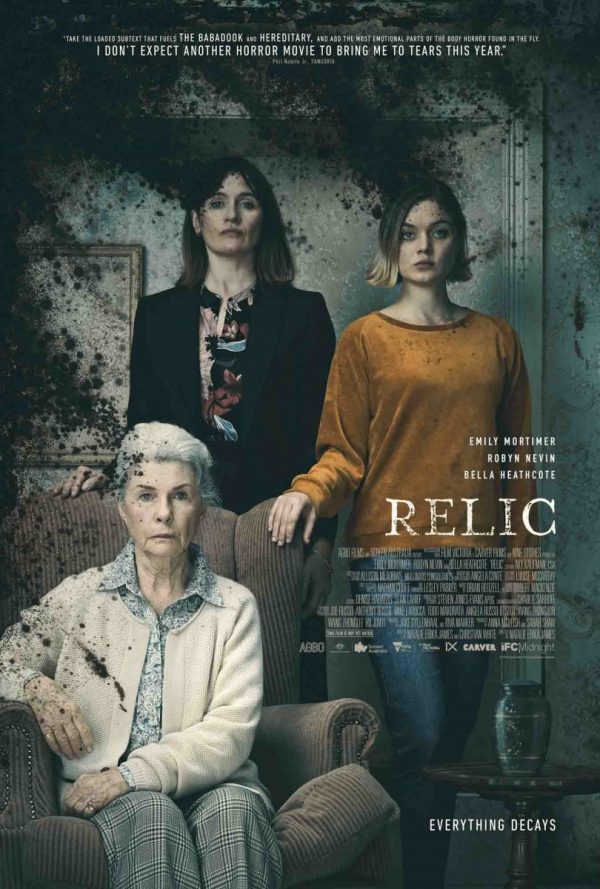 A daughter, mother, and grandmother are haunted by a manifestation of dementia that consumes their family’s home. Ari Aster’s Hereditary recently proved the enormous artistic potential of horror which commits as hard to painful human emotions as it does things that go “boo!,” and that’s similarly the case in Natalie Erika James’ deeply haunting directorial debut, Relic.

After Edna (Robyn Nevin), the demented, elderly matriarch of her family goes missing, her daughter Kay (Emily Mortimer) and granddaughter Sam (Bella Heathcote) travel to their isolated family home in search of her. Though it isn’t too long before Edna turns up, it’s clear that something far beyond dementia is plaguing her existence, while also threatening her descendants.

At its core, Relic is a genre-tinged drama about the pain of human deterioration beyond the finality of death; the relatable anguish of watching someone you love waste away to nothing even while they’re still walking around. As much as it could make for a purely depressing through-line, this is ultimately a warm and human film underneath its grimy heartbreak, a compassionate plea for greater compassion for our infirm elders – after all, it’s a fate which could await any one of us.

Writer-director James attaches this to a more conventionally heightened horror aspect, as Edna’s home finds itself increasingly consumed by a black mould-like substance and hints of a dark past are quietly whispered. Yet so intimately intertwined is this all with Edna’s plausible physical decline – the home itself serving as a metaphor for her own breakdown – that it’s scarcely less compelling.

It helps, of course, that James has assembled a tremendous trio of actresses for the lead roles. Emily Mortimer wears a mask of desperate, wrenching agony on her face at almost all times, while Bella Heathcote is remarkable as her pluckier yet also more vulnerable daughter.

The easy MVP of the trio, though, is veteran character actress Robyn Nevin, whose portrayal of a woman slowly losing herself is utterly heartbreaking. Were it not for the Academy’s historic bias against horror, Nevin should be in consideration for the Best Supporting Actress Oscar. Yet even without its firm acting triumvirate, this is an astonishingly assured, confident debut for James, who stages the film almost entirely within Edna’s home and milks it for every claustrophobic drop it’s worth. Despite clocking in at just 89 minutes, Relic is a patient movie which takes the time to linger on small, human moments, before eventually exploding into more overt set-piece horror in its third act. But even then, it never deigns to become a hackneyed carousel of jump scares and parlour tricks.

Many will understandably be talking about the way James chooses to end her story, with an unforgettably haunting finale which crystallises and externalises the film’s central grounded thematic in an extremely evocative, upsetting, and yet oddly beautiful way.

No matter the imagery audiences are subjected to, it’s always suffused with a layer of compassion from James’ point-of-view, one which she’s stated in interviews is informed by her own experiences with her grandmother. That semi-biographical input is doubtless a big part of the reason that her film hits as hard as it does.

Trading kooky genre typicality for a more quietly devastating, unassumingly rich examination of sturdy existential themes, this is yet further proof that the “mundane” horrors of everyday life will always triumph over things that go bump in the night. Like so many great horror films, Relic uses its supernatural footings to accentuate an achingly human character study.