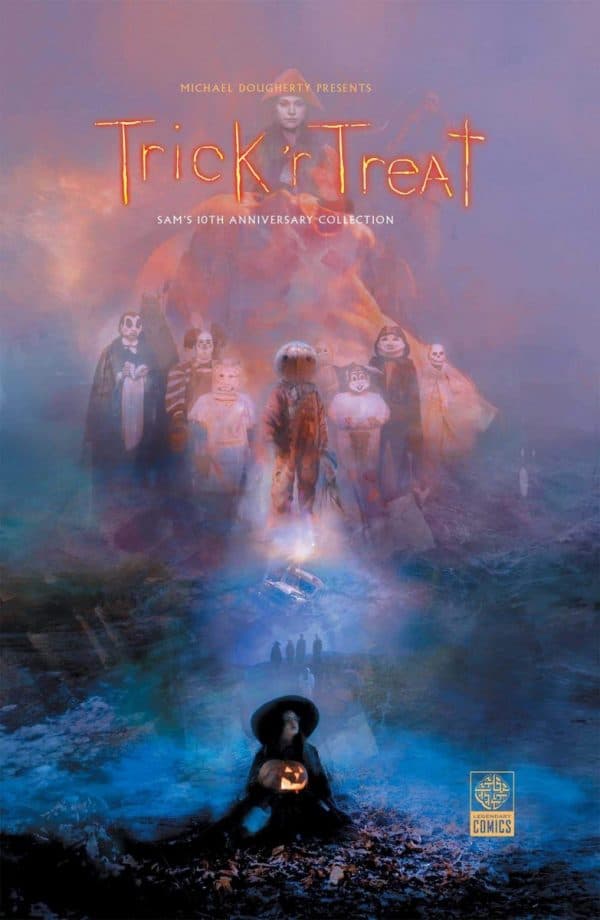 It’s that time of the year and while many there will be many reviews and list of scary comics and books, only a handful will actually creep you out. Depending on your tolerance level, of course, scary comics can be a hit or miss. However, for those that love the cult classic horror film Trick ‘r Treat you will be pleasantly surprised at the graphic novel Trick ‘r Treat Omnibus.

The creator Michael Dougherty (Godzilla: King of the Monsters, Krampus,) brings life to the this adaptation of the the legendary horror film to mark its 10th year anniversary. To celebrate, the talent involved in this graphic novel includes some of the best horror and action writers and illustrators including Zach Shields, Grant Bond, Eisner Award-winning writer Marc Andreyko and Eisner Award-winning artist Fiona Staples plus more.

This graphic novel features a total of four different parts and each part has a different scary element to it. While collectively, they all feel they are in the same universe, each part has a scare factor that impacts the reader differently.

Part one takes place on Halloween evening in a typical suburban neighborhood where kids are dressed up for the night going door-to-door to get treats. The story focuses on families as they prepare for their night of young visitors. Each family has a different scary experience which includes a supernatural but predictable death, a sociopath and sadistic father who is obsessed with death, and a family who finds themselves in a twisted horror experience while on a school bus. The art is dark yet vivid and the stories move quickly enough but sometimes end abruptly.

Part two is a singular story that focuses on a Halloween party that gets a little bit too wild. In typically standard horror tropes, we usually see women get assaulted or hurt and this story plays into that trope by combining a femme fatale story with horror. During the wildest costume party of the year, things start to get out of control but a group of friends all dressed up as Disney princesses arrive and they leave their mark in a trail of men who won’t ever forget their experiences with them. It’s the first time I’ve read of women using their monthly cycle as a means to kill.

Unlike the previous parts, part four takes place in the past by way of a grandfather talking to his granddaughter about magic. While his granddaughter doesn’t believe in magic, he tells her a story of how witches in Ireland used magic. It’s an interesting tale that is similar to most colonial witch tales. The second story, Corn Maiden focuses on magic in another historical setting between the Indigenous people and the European colonizers. A daughter of a settler tries to introduce the concept of Halloween to the Indigenous people and the adults of the tribe denounce it. Unfortunately, the daughter is being used by the older settlers to extinguish the Indigenous people and it backfires. The final story has a bit of a noir feeling to it. A sexy siren meets a private investigator and the investigator finds himself coming across black cats and and all kinds of suspicious supernatural happenstance. His journey leads him to a frightful house with a bunch of scary monsters that are somehow connected to the sexy siren.

This graphic novel covers all the vast possibilities of horror. The historical and noir stories add the icing on top of a well put together series of scary tales. This is a delightful and beautiful book that has a few unexpected surprises that will satisfy even the biggest horror fan.