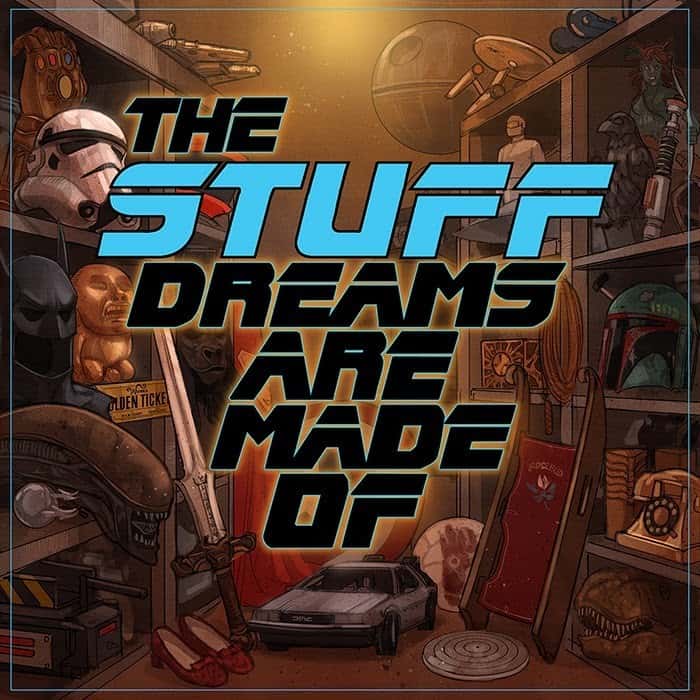 Hollywood writers David Mandel (Veep, Seinfeld, Curb Your Enthusiasm) and Ryan Condal (Colony, Rampage, Game of Thrones prequel series) have a new podcast sharing the stories behind artifacts from the sets of beloved films and television series.  It’s called The Stuff Dreams Are Made Of.

Not only do the guys talk about their own Hollywood experiences while revealing histories of a screen-used Mos Eisley Cantina Band member mask, a Planet of the Apes soldier costume, a distressed Terminator jacket, and an original cowl from Tim Burton’s Batman, but they dig into the myths and mysteries behind acquiring tinseltown treasures.  Flickering Myth’s Tai Freligh caught up with the guys to talk all things prop collecting, the new podcast and tried to get Ryan to cough up some House of Dragons spoilers.

Explain the title of the show and where it’s from?

The Stuff Dreams are Made Of references a line from the very end (spoiler) of the Maltese Falcon when Sam Spade (Humphrey Bogart) is left holding the (fake) Maltese Falcon as Gutman (Sydney Greenstreet) and his goons have raced off to Istanbul on another tip regarding the real statue. The line is apparently — if you believe the movie lore — something that was not in the script and that Bogie improvised based on a similar line from Shakespeare’s The Tempest. And there’s simply nothing classier to us than stealing from Humphrey Bogart who stole from William Shakespeare.

Not only is the Maltese Falcon one of the greatest movies and movie props of all time, but that movie is almost perfectly emblematic of what we as collectors do. We chase a tangible connection to our dreams with very mixed results. But the pursuit, the hunt, never ends for us. The thrill of it is what excites us and drives us along the quest.

Will you address the interesting tales of the various prop versions of the Maltese Falcon that have been tracked down and sold at auction and bought for private collections, etc. in an episode of the podcast?

Yes, at some point we will do a deep dive into the lore of the prop Maltese Falcons, which have in a way become just as mysterious (and in some cases, as fake) as the historical artifact everyone is chasing in the movie. Subscribe and stay tuned, listeners. 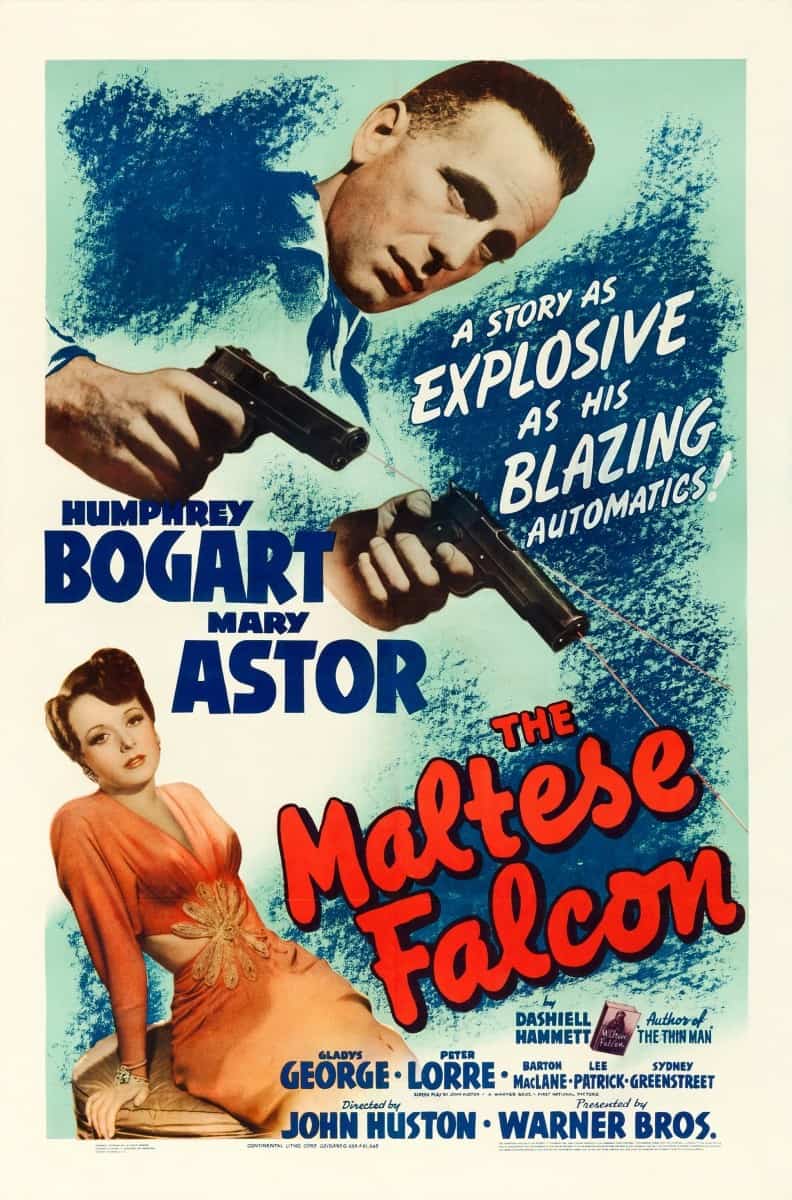 How did you each get into prop collecting?

Ryan: I have always loved movies, and I also believe that I have always been a collector. I started by collecting comic books and Star Wars toys in my youth and I moved up to collecting — replica — movie props when I was a little bit older. I was obsessed with learning about how these objects from my favorite films (in the 1970s and 1980s) were made. Most often, they were made from “found” objects, things the prop-makers found on a shelf and converted into that beloved prop. Luke’s lightsaber from A New Hope is a piece of camera equipment from the 1930s with a bunch of stuff stuck onto it. Owning Luke Skywalker the Kenner action figure is cool, but owning a life-size, exact replica of Luke Skywalker’s lightsaber was even cooler. At some point, hanging around with replica collectors, originals started to bleed into the fringes. I remember in the space of a year I saw and handled one of Indiana Jones’ grail diaries from Last Crusade and a real Stormtrooper helmet from A New Hope. I couldn’t believe these things were pieces a private citizen could own! My mind was hooked. A few years later, when I started making good money as a screenwriter, I waded into the “screen-used” waters. I picked up one of the pilot helmets from Ron Moore’s Battlestar Galactica at the official auction that NBC/Universal held and I was hooked. I never looked back. 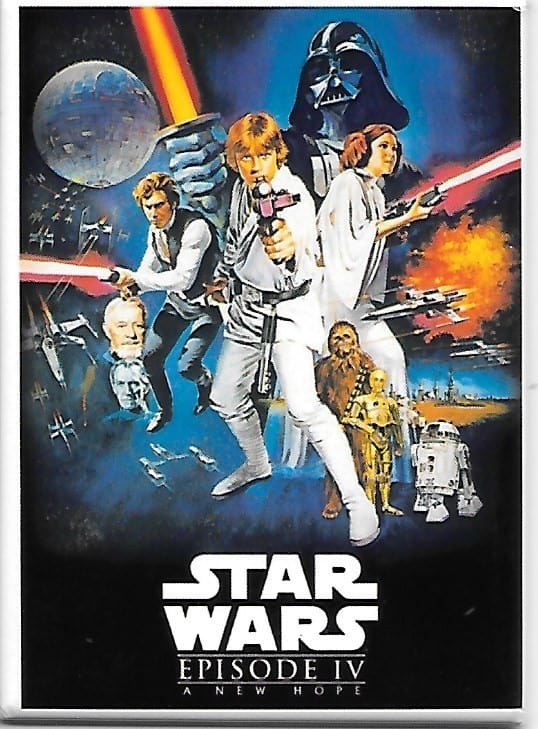 Dave: I was always a collector: baseball cards first, and then comic books. When I moved out to Los Angeles, I not only started collecting original comic book art— the hadn’t drawn pages— but I began to rebuy the toys I had as a kid, only mint and still in the package. One day, I realized I had all the vintage Star Wars action figures and vehicles that a person could have when in the back of a toy collecting magazine, I saw an ad for a Stormtrooper helmet that was worn in Return of the Jedi. Then I blacked out and woke up doing this interview.

What is your most prized prop in your personal collection?

Ryan: I have a lot of pieces that are very dear to me, but I think the last thing I would ever part with is my original, screen-matched Indiana Jones fedora from The Last Crusade. It’s just wonderful, and the Indy films are amongst my very favorite movies.

Dave: Picking your “most prized prop” is like picking your favorite child… it’s my daughter, I like her more than my son. If I had to pick a prop, I would say my original screen used Chewbacca mask from Star Wars: A New Hope. Chewie was my favorite character as a kid, and while of course it was a mask and costume, Chewbacca seemed so real to me when I first saw the movie.

What is the Holy Grail of props that you want for your own collection?

Ryan: We actually have a whole episode coming up about this! I don’t know, I bounce around a lot on this idea. There are so many great things that are “the” representation of our favorite films. For me, and I talk about this a lot on the podcast, collecting began with Star Wars, so it would have to be something from those films. I am a huge Han Solo nut — have always identified with him more than Luke — so I’d say one of his hero blasters. Probably the one he draws on Darth Vader in Empire Strikes Back. That is probably my favorite character moment of Han’s in the entire trilogy. It just shows that he is absolutely fearless and will do anything to protect his friends. He drew a gun on the scariest man in the galaxy without even thinking about it!

Dave: This is a bit of a spoiler from the episode but my dream would be an original scratch built ILM Star Wars model. Like and X-wing or a tie fighter. That would be insane. 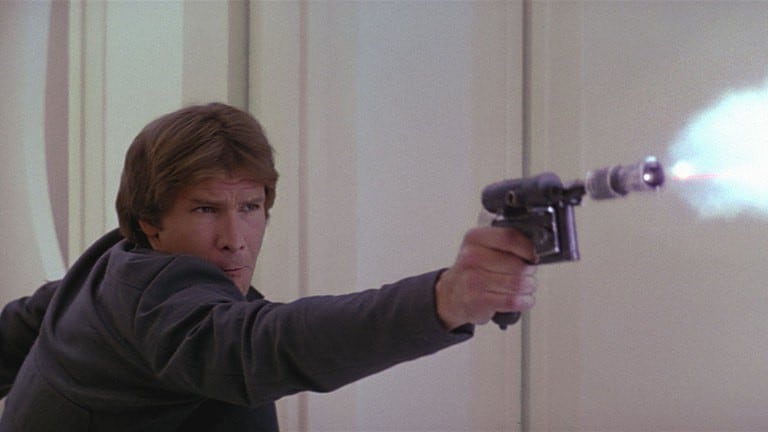 Are there prop collectors that you look up to or consider best in class?

Ryan: I really look up to Dave quite a bit, and I know he admires me even more.

Dave: I do not care for the way Ryan collects.

Ryan: There have been a bunch of “celebrity” collectors who have come and stayed and gone over the years, but for me I really respect the guys who got their hands dirty and did the work of tracking multiple pieces down at the source. My very good friend Brandon Alinger — I think my oldest friend in the collecting world — is one of these guys. He has sourced countless amazing original pieces right from the sources. He has amazing stories of finding objects that would be the centerpiece of anyone’s collection, and he’s done it multiple times! We’re going to have him on to tell his stories this season sometime.

Dave: I went and saw Guillermo del Toro’s exhibit at LACMA a few years ago. I would love to chat with him.

What is the appeal of prop collecting?

Ryan: I have always said that it is a tangible connection to an intangible thing. Movies are really just dreams, or memories in the end. They’re a collection of emotions that live within us. The first time you saw it, how you felt when you did, how it impacted your childhood. These are the things that we carry with us — the nostalgia of it. The right piece can bring you right back to that place and give you a permanent, physical connection to those memories. There’s really nothing quite like it.

Dave: Yeah, it’s being able to own an actual little piece of your favorite film. You get to hold it.

What advice would you give to people who want to start collecting props and what sorts of resources would you recommend for people to get an education on how to do it?

We always say: do your research. It’s a really wonderful hobby, but it does require a lot of study before one can really jump into it. There are a ton of online resources, including groups on Facebook and Reddit and other places on the internet. Look at the big auction houses — Profiles in History, Prop Store, Julien’s — and find out when the next auction is happening. Go to these places, meet other collectors, download auction catalogs, bid or watch a movie props auction. The best way to do it is to immerse yourself in it and figure out what kind of collector you want to be an what you want to chase. There’s a book we’ll cover on the podcast called The Ruby Slippers of Oz, which is a great story about the golden age of collecting and is still, 50 years later, a completely true and relevant example of the experience of a collector.

Where can people find your show and how can they subscribe?

Can you give us an idea of the types of things you’ll be covering in the first season of The Stuff Dreams Are Made Of?

We’re trying to make our first season an introductory course in collecting. The idea is that at the end of the season, you understand how all this stuff works, who the players are, how things are found and bought and sold, how auctions work, how these things are made for movies and television shows, how they’re stored (or not), how they’re restored, and how they should be displayed. We’re going to have interesting guests like other collectors or people who make this stuff for a living. By the end of the twelve episodes, you should be ready to be a collector yourself. 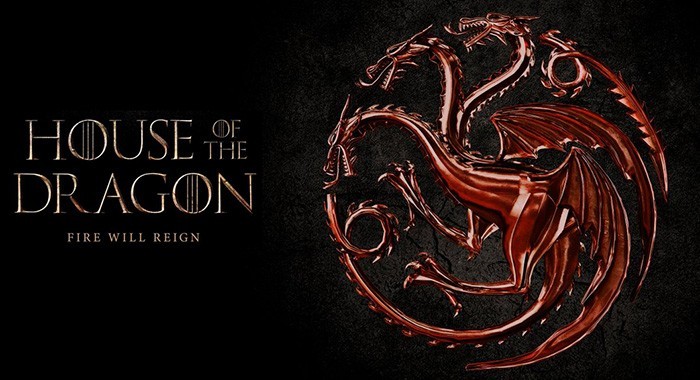 What can Ryan tell us about House of the Dragon, the Game of Thrones prequel show? Any hints?

Ryan: Are you trying to get me killed?

Dave: I’d like to answer that one. I can’t give anything away, but here is a big hint: purple monkeys!

What other projects does David have coming up outside of the podcast?

As the pandemic was kicking in I was about to start directing an HBO mini-series about the Watergate break-in from the perspective of Hunt and Liddy, the burglars. We are hoping to start it up again next year.

Rooster Teeth (a WarnerMedia company) has announced the launch of a new podcast entitled “The Stuff Dreams Are Made Of” hosted by David Mandel (Veep, Curb Your Enthusiasm) and Ryan Condal (Colony, Rampage, Game of Thrones prequel series). This Hollywood insider podcast invites listeners to join David and Ryan as they share the wildest stories behind the props, costumes, art and other ephemeral treasures they’ve accumulated during their combined 35+ years of A-list show biz experience.

We thank Dave and Ryan for taking the time to answer our questions.  As of this writing, the first two episodes are available for listening.