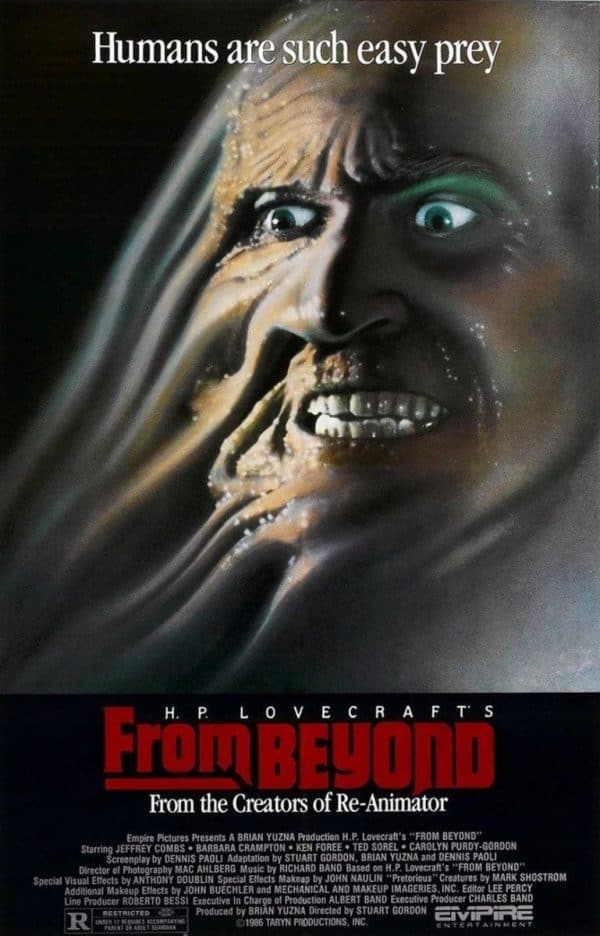 After taking a look at cult horror-comedy Re-Animator not too long ago, it’s time for another trip into the weird and wacky world of horror writer HP Lovecraft. Whereas Re-Animator dealt with a familiar story of a mad scientist dabbling with the forces of life and death, Lovecraft also wrote stories in the realm of what is called ‘cosmic horror’. These where often tales in which humanity decided to make the ill-conceived decision to peek beyond the veil of the perceivable world only to discover hidden horrors that drive them to madness. Our film today is one such story, the gruesome body horror of Stuart Gordon’s From Beyond. 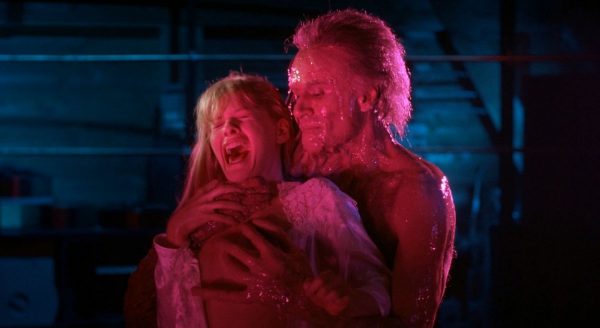 Made by the same team as Re-Animator and featuring two of its main stars, From Beyond is very much in the same vein of the earlier film. However, instead of taking an overtly comedic take on the material, director Stuart Gordon decides to play it straight, creating a work that is decidedly darker in tone and much more concerned with horror. Yet, despite taking a much more serious approach, From Beyond still retains elements of that same twisted sense of humour, the straight-faced approach often serving to make the increasingly crazy antics on screen all the funnier.

Re-Animator star Jeffrey Combs takes on the role of Crawford Tillinghast (all that’s missing from a name like that is a monocle), another scientist embarking upon a dangerous and absurd experiment. However, unlike Herbert West, Tillinghast is a crazed scientist attempting to stop these experiments, ranting about how humanity would be doomed if they were allowed to continue. Combs delivers another engaging performance, the much more sympathetic Tillinghast being a refreshing change from the obsessive douchebag that was West, even if he isn’t quite as much fun. Combs wins points for being able to deliver ridiculous dialogue and make it sound meaningful, such as how he can say the line “It ate him….it bit his head off…… like a gingerbread man” with genuine sincerity. 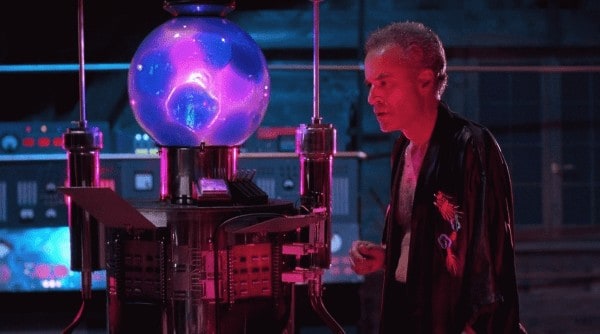 Barbara Crampton also returns from Re-Animator, and thankfully this time around she is given more to do, taking on the role of Dr Katherine McMichaels, a psychiatrist trying to find out if Tillinghast is telling the truth or if he is merely delusional. Crampton is also great, being a rather reserved woman of science while managing to hint at a more mischievous side that eventually breaks out in a very eye-catching and memorable way. Again though, Crampton is forced to endure a rather unpleasant scene in which she is victimised by a monstrous creep. However, this time around thankfully, it isn’t as gratuitous as the severed head assault in Re-Animator.

We also have the awesome Ken Foree (perhaps best known for his role in Dawn of the Dead) as Bubba, the film’s comic relief, regaling us with one-liners and casual declarations about his hard-ons (yes really). Foree is probably my favourite part of the film, with the man still managing to look bad-ass even while wrestling a giant worm monster in a speedo. He wearing the speedo, not the worm monster. That would be weird. 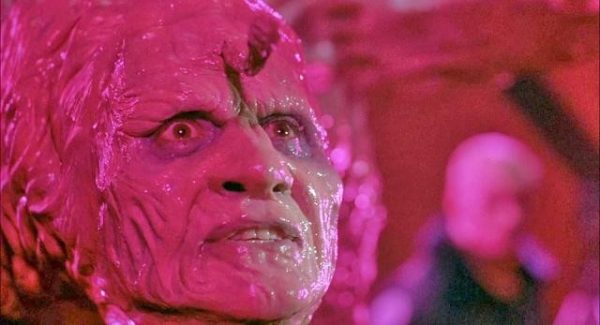 The main draw in From Beyond though is the creature effects which, despite being a bit rough around the edges, are still highly impressive and best any form of bad CGI. The creations conjured up by the effects team is the stuff of a Freudian nightmare, including, but not limited to, a man peeling off his own face off like it was mince before turning into a cackling melted penis beast with an antenna. And that thing comes before we even get to see Jeffrey Combs turn into a bald antenna sporting vampire who sucks delicious brains out through his victim’s bloody eye sockets. Did I mention that this film is a bit weird?

While it is a lot of gruesome gooey fun, From Beyond is not without its shortcomings, although they are minor. Much of the film takes place in a single location which, while necessary for the story, can leave the film-makers a tad limited in what they can achieve, although this perhaps due to budget limitations. Similarly, the scenes between the creature encounters aren’t quite as much fun as when they do appear, but the funny banter and colourful performances do manage to keep things moving along at a nice pace and it does make the creature encounters all the more savoury. Furthermore, this film boasts what might be one of the most underrated villain lines ever, spoken by the hilariously evil and increasingly gooey Dr Pretorious when he says; “Humans are such easy prey”. It’s a line delivered with such sinister campy menace that they slapped it on the poster as the film’s tag line. I fucking love it. 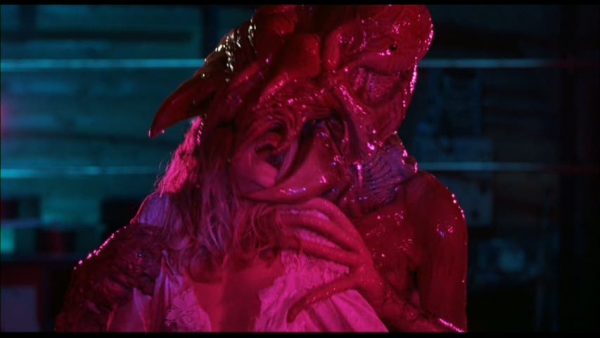 From Beyond might not be as beloved as Re-Animator and honestly, it might not be as good as the earlier film. However, he dark humour, entertaining performances and impressively disgusting special effects ensure that From Beyond is still an immensely fun and deeply underrated slice of Lovecraftian horror. Check this one out.