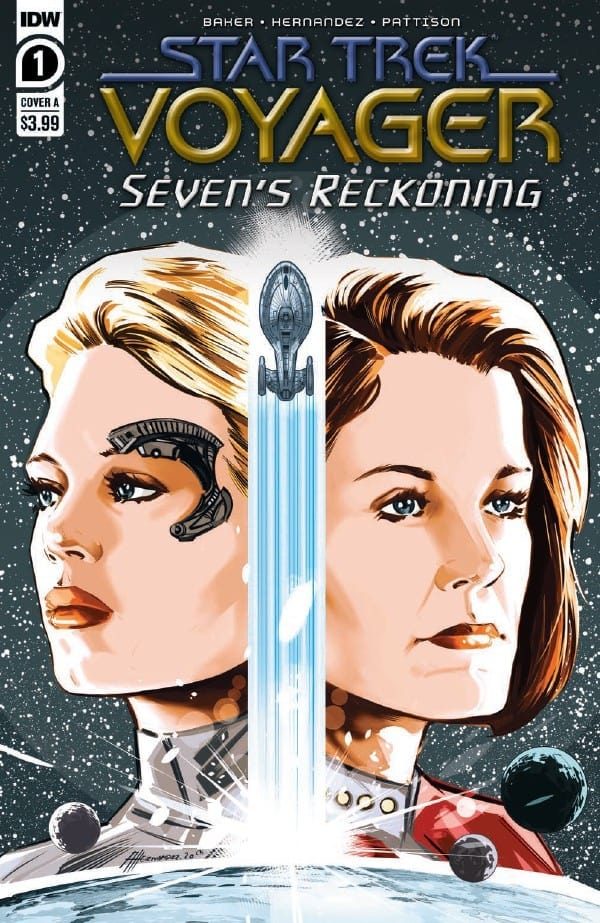 The USS Voyager has finally returned to the comic book pages thanks to IDW Publishing.  This isn’t a One-Shot special either.  Nope, this is an honest-to-goodness four-issue story, titled Seven’s Reckoning, which has been penned by Dave Baker (Star Trek: Waypoint), with art and colours being delivered from Angel Hernandez (Star Trek: Picard—Countdown) and Ronda Pattison (Teenage Mutant Ninja Turtles).  Finally, we’re going back to Delta Quadrant with the crew of the Voyager.

With the USS Voyager coming to an abrupt halt due to an extremely large, unknown craft sending out a possible distress signal.  Chakotay then leads an away team over to the vessel with Tuvok, Ensign Wildman and Seven; only recently it seems has Seven left the Collective.

Searching through the vessel it appears this starship has been travelling for close to a thousand years, though Ensign Wildman and the Universal Translator are having great difficulty deciphering the language painted around this ship.  Though on first investigation it appeared there was little more than a dead captain was on board, they soon discover the rest of the crew in stasis.

With the ship waking up the crew, the Away Team discover this race is called the Ohrdi’Nadar and they’ve been adrift for many years due to their Warp Core malfunctioning.  With Captain Janeway offering assistance with the promise of bartering for supplies, they set to work fixing the Warp Core.  It’s during this time onboard the Ohrdi’Nadar’s ship, Seven comes to see that not everything is wine and roses for the workforce. Honestly, I’ve been waiting for a new Star Trek: Voyager comic for ages.  It seems IDW Publishing must have received all of my emails, as here in Issue #1 of Seven’s Reckoning they’ve hit all the right targets for a near-perfect score.  The story is spot on, and it already feels like a missing episode as – this isn’t me besmirching Dave Baker – I feel I can see where this is going.  Centuries-old civilisation, uprising, the crew becomes involved against orders, Janeway will not be too impressed etc.  It feels like it’s taken straight from the Voyager Bible and it works.  This being said, it may not even play out like this, it may shoot off in a completely different direction and that too will be even more fantastic!

As for the artwork, I’m a huge fan of Angel Hernandez and when I saw his name attached to this release I was excited to see what he would deliver.  I wasn’t disappointed.  His work in this Star Trek release is brilliant and he, along with Ronda Pattison, has given us an excellent looking Star Trek: Voyager comic book.

We have here a brilliant Star Trek: Voyager comic book, one everyone needs to buy.  You need to pick this up today, thanking all involved whilst you’re doing it.