Tom Jolliffe looks back at the film which broke Luc Besson out to the world, and his more recent and pale imitator, Anna…

Cinema is almost bereft of an original idea these days. There are very few that arrive which feel like something unique, and even then, the smart-arses among us might start pinpointing similarities to films of yesteryear. The Lighthouse is certainly something of a singular beast, the like of which you’ll feel has much newness about it, but at the same time it has distinct homages and has been compared to a number of similarly themed cabin fever horrors (not least The Shining). Occasionally of course, those similarities are even more striking. Die Hard didn’t invent it’s particular outline, although its undoubted success did spawn the ‘Die Hard sub genre’ which has since been absolutely overstuffed with films from small screen, right up to big screen spectacle like Skyscraper.

Furthermore, a number of films get the remake treatment. That’s not even to make mention of sequels which are historically virtual remakes of the original anyway. A remake or reboot however will modernise and repackage an old film and sell it anew. We’ve even seen directors remake their own. Hitchcock delivered us two versions of The Man Who Knew Too Little. Ozu two versions of Floating Weeds. Hans Peter Moland more recently remade his hit Norwegian Thriller, In Order of Disappearance, for its Hollywood translation, Cold Pursuit (replacing Stellan Skarsgard and making one of the last decades spate of Liam Neeson lead pot boiling thrillers). In almost all cases, first time around was better (a rare exception being Michael Mann’s Heat, a remake of his TV movie L.A Takedown).

Now, Luc Besson, whose producing output is almost exclusively genre films, and as such devoid of originality (and not in a negative way…he delivers to a specific audience that want a tried and tested formula), was once one of the freshest directors on the world block. Between making waves with Subway, to breaking out with Nikita, becoming almost legendary after Leon, and hitting cult acclaim with The Fifth Element (which certainly had originality and flair, over its messianic save the Universe formula), Besson was in genre circuits, what you might call hot shit. Lets look at Nikita (also known as La Femme Nikita) though… His stylish and visceral action drama was a total power punch to the senses. Visually stunning with an endearing and interesting protagonist, the film wowed audiences and even critics (in a genre not always known for critical praise). Nikita is a drug addled waif, part of a gang of hapless addicts who end up in an all out (and brutal) shootout with police. The whole gang is killed and Nikita, out of her mind on drugs, shoots and kills an officer. She’s sentenced to death, with every other police killing during the siege laid at her hands too. After lethal injection…she awakes in a secret complex and there she is retrained and refined into becoming an assassin. Incidentally, before I get onto Besson all but remaking this himself, the film was of course given the Hollywood remake treatment with Assassin (Starring Bridget Fonda) as well as a couple of TV shows.

When Leon came out, like many, it absolutely blew me away. It’s a great film, and it’s one of the best action films of that decade. It’s got a great cast with Jean Reno and Natalie Portman both fantastic. It’s got an iconic villain in Gary Oldman too, and great action. It’s still one of my favourites. However…as years have gone by, I think Nikita is a better film overall. Many of the tropes we saw in Leon, are repeats from Nikita of course. That being said the visual style is even more distinct in Nikita. It’s drowning in blues and neons in places. There are more scenes at night, giving the film a very distinct, dazzling and almost fantastical look. As lead, Anne Parillaud is utterly captivating. She’s young and innocent, very naive and initially alien to the world she finds herself in (an oft repeated Besson trope). Parillaud remains the definitive and most magnetic Besson heroine. It’s not just her performance, it’s the writing too. It’s also a performance where she leaves nothing behind. Even when she becomes a clinical and cold killer, there’s still an intense vulnerability. This is something people often forget in the modern day female action hero. I know the stoic unshaken male hero has been a long held tradition, but there’s a reason the villains are often more interesting than the heroes in many american male lead action films. It’s those rare occurrences of some vulnerability or fallibility (like John McClane, or Rambo in First Blood) that make them interesting. A female lead action film has historically always worked best by embracing those differences and approaching from a different angle. Nikita does this (Atomic Blonde also did). Anna does not. The whole aspect of Nikita being let out to build a life after training (always awaiting an assignment which could come tomorrow or in a year) is interesting too. The quirks of her character amplified by having to reacquaint herself with social graces. Nikita is just full of great moments where as a director of subtlety and flair, Besson has never been better, aided with Eric Serra’s best score too (he’s always great, but the Hollywood films have tended to try to restrain some of his flourishes, which are in full flow here). The action sequences are brilliant and feel grounded, punchy and brutal (but bluntly so, and not gratuitous). The final scene of the film too is also impeccably played out. A simple sit down dialogue scene, saying very little but also a lot, and brilliantly played by Jean Hugues Andrade and Tcheky Karyo.

Now beat for beat, Anna’s foundations are incredibly similar. Troubled girl, retrained as an assassin. Feels like she’s trapped in her new found profession etc etc. There’s a play around with narrative structure to add an air of mystery, which only tends to add a level of frustration. Likewise there isn’t anything really interesting about Anna as a character, nor how she’s portrayed. It’s the typical thousand yard stare, posing bad ass heroine routine that feels insincere. She’s not a superhero either, and it feels more comical than cool when Sasha Luss is taking out multiple male opponents twice her size. Nikita fought dirty, used surprise, bit ears off. The world of Anna not only owes much to Nikita, but it also has a passing debt to the recent John Wick boom, and some of the notable follow ons like Atomic Blonde. Now, Charlize Theron sold those fights, and we were grounded by the fact she was battered to hell in doing so, or using every potential one upper she could find to even the odds. In part it’s better fight design, with more forethought. It’s not just a case of making female fight sequences more realistic. It relates to any noticeably big size differential and how you craft the fight around it. Jet Li for example (and using another Besson connected film as comparison). Kiss of The Dragon saw Li have to approach a physically superior opponent with systematic tactics. Action films do require suspension of disbelief of course, but if there’s still some sense of grounding, it works better. John Wick might be ludicrous at times, but it’s also got a logic and a fallibility. We believe John Wick is vulnerable, even if he seems death proof. 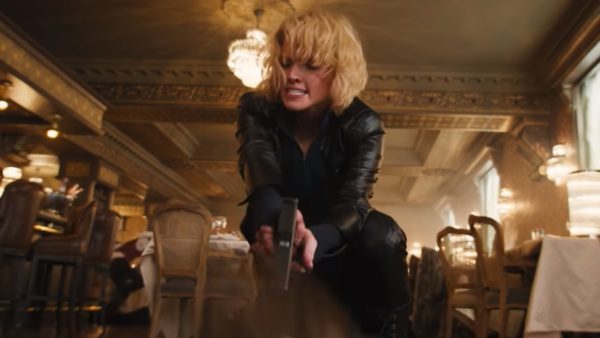 The most noticeable issue Anna had in comparison to Nikita (aside from Sasha Luss being functional as an actor/character, compared to Parillaud being exceptional), was in the lack of ingenuity and flair from Besson. A lot of greats have lost that edge, that creative brilliance. Besson has been at the mountain top, like many, and like great directors in the early days, that drive to reach the top takes a lot. If you roll down the hill or fall from the top, climbing again won’t be the same. It was somewhat disappointing that he would revisit so much of Nikita, repackage it as something else and then deliver something that is a pale imitation. It’s like having an amazing Michelin starred meal, and then buying the microwave ready meal version. You can hope the taste of that meal will be nice after the ping, but it’s always going to be poorer. I sometimes wonder why some film-makers hit such a high note with a film, and then want to essentially try and do the same thing again. When you haven’t got it quite right in the first instance (L.A Takedown by Mr Mann) then going back has more reasoning. Moreover, Besson’s film prior to Anna, was Valerian. This wasn’t quite as overt in its mimicry to his previous work, but that film still felt more than a little like it was lifting from The Fifth Element. It’s of course, nowhere near as good, although that said, a film I felt was very enjoyable and a tad underrated. So in terms of making enjoyable films, Besson still has it in the tank (Lucy has its charms for sure) but hopefully he can step fully away from looking back through his CV, particularly to his masterworks. If you did it right the first time, why go back?