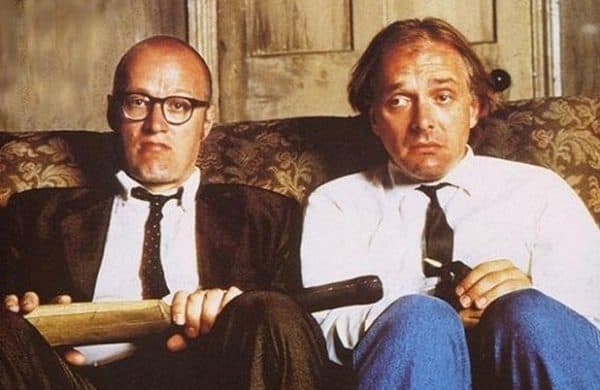 There are some things that make us laugh more than probably anything else. You can be struck at random moments, thinking of a quote, a moment, a pratfall, and find yourself laughing. You could be walking down the street at the time, giggling to yourself like a loon, looking more than a little odd to passers by. If you happen to catch me laughing to myself as if hit by a random thought, then chances are I’ve got Bottom on my mind. Even the name of the show is gleefully immature, and a set up for episodes with titles like ‘Smells’…Bottom Smells. Holy Bottom. Bottom Apocalypse, among others. There probably isn’t anything else (bar Withnail & I) which strikes my funny bone quite so regularly during passing thoughts.

The series began in 1991, ending in 1995 after a three season run. The sitcom refined (and I use ‘refined’ loosely) the kind of archetypes that creators Rik Mayall and Adrian Edmondson had become known for in their collaborations. It’s a barrage of comical Looney Tune-esque violence, physical humour, knob gags and wayward scheming. As a double act the pair worked exceptionally well together, and it showed in the many shows they created (The Young Ones particularly iconic, as well as The Dangerous Brothers, The Comic Strip and the lesser known Filthy, Rich and Catflap). I’ve watched the series countless times, with no episode that ever felt like filler to me (even though the third season isn’t as fresh and majestic as the first two). Every line springs to me now, seconds before its uttered on screen. Though I’m not even half as obsessed with Bottom as I was as a teen (oo-err).

There are some really immense episodes that play out brilliantly. I can find myself, still, aching with laughter when watching them, or unable to stop myself laughing if a particular moment, or gag that taps me on the shoulder in the street (or at work) and reminds me of it. Sometimes I’ll just find myself thinking of a veritable array of deranged facial expressions Rik used to pull and laugh. Bottom feels at once so uniquely, anarchically British at the tail end of a comedic new wave in Britain. Much of the humour and double-entendre-laced gags certainly strike the British funny bone more than it might elsewhere (though the show does appeal to other English speaking countries at least). However as far as the physical comedy and the relentless physical duels between Richie and Eddie, those occasionally appeal to more international audiences as they watch the living embodiments of old school cartoons. That being said, if you don’t ‘get’ Bottom, it’ll all look utterly bewildering.

There was also a particularly defining moment in my Bottom fandom back in the day, and that was upon discovering the existence of the live shows. The second live show was released on VHS in the UK some 25 years ago this month. It was Bottom Live 2 which I saw first. I bought the tape as a birthday present for a friend. I sneakily watched it before wrapping it up and delivering it. I almost died laughing. It was just as insane as the TV show, but it was thoroughly unrestrained and littered with the kind of language you couldn’t include on the BBC. Yes, things had jumped from 15 certificate to 18, and I was 13, so this was of course, inherently amusing in itself. After my friend opened his gift we watched it and I had to pretend this was all fresh, but the ruse was easy, because I was guffawing as if it was the first viewing. Then we finished, rewound the tape, and watched it again. The whole plot involves Richie and Eddie prepping for a visit from the Queen as they scheme a way to divert her into their flat. That’s funny enough as a concept, until a lewd comment from Eddie makes the plot turn a little more lewd, and the end goal becomes Richie trying to ‘pork the Queen.’ Throw in a second act stint in prison and foul mouthed parrot and you had comedy gold. Within weeks we could almost quote the entire thing verbatim (we probably still could to be fair). Even in writing this I think of random moments and chuckle, Richie admiring Prince Phillip’s nose just hits me, “Magnificent nose your Dukeness. Looks just like a knob…curtsey to the knob-nose Eddie” (my wife has actually just looked at me and asked what I’m laughing at…should I tell her?) 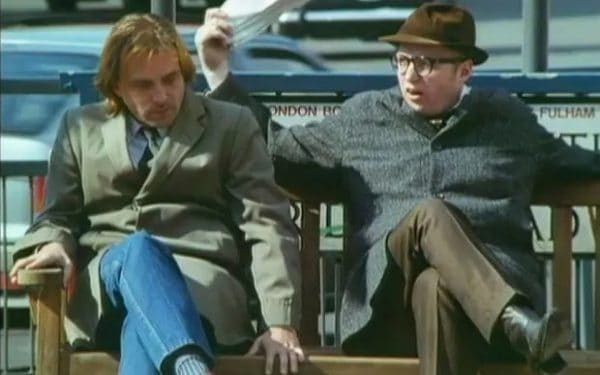 Aside from the additional violence, the live shows also gave further indication, without the refinement of editing (that can occasionally gloss over this), of just how great the synergy was between the two long time collaborators. Like the great comedic duos, particular when put in a live scenario, you really get to see that dynamic and energy in full. The shows were delightfully imperfect with each of the five live shows (all great but 1-3 particularly brilliant) filled with mistakes, and the subsequent banter between the pair. YouTube in fact has compilations of the live show gaffs (as well as the shows in full). The funniest moments can often be when the pair throw curveballs at each other, causing the other to have to contain their own laughter (Rik randomly pulling out a Leonard Rossiter impression in the first live show for example).

When Rik died in 2014, like for many fans, it was crushing. Only months previously there had been murmurs of a potential new series that sadly never materialised. A comedy typhoon with a devilish sense of humour had gone, and upon those regular moments of laughter the show still brings me, I occasionally find myself forgetting he’s gone. Then I remember, and sometimes the laughs become wistful. Still, quite the legacy, as undoubtedly I’m not alone in feeling this toward not just Bottom, but the other works of Mayall throughout his career (his political satire, The New Statesman is as prescient as ever). When the next recollection strikes me at a random moment, it’ll certainly be sure to brighten my day, and make me look like a giggling lunatic whilst I’m doing my shopping (or whatever I’m up to).