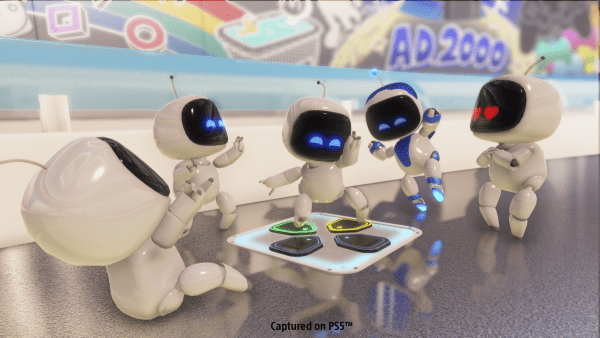 While free pack-in launch games bundled with new consoles rarely invite high expectations – generally being piecemeal quasi-tutorials to the system’s quirks as they are – Astro’s Playroom is a rare title delivered in this manner which boasts all the charm and finesse of a full-fat retail release.

Astro Bot was first introduced in The Playroom, the PS4’s own pre-installed title which acquainted players with its DualShock 4 controller and camera, before becoming a much-vaunted de facto Sony mascot with the superb PSVR release Astro Bot Rescue Mission.

If that game was very much the “Mario 64 moment” for Sony’s VR headset, fans will be thrilled to learn that the same inspired spirit of creativity coarses throughout this wonderfully conceived celebration of PlayStation’s quarter-decade in the ‘biz.

Astro’s Playroom is a bite-sized platformer concerned largely with showing off the PS5’s exceptional new controller, the DualSense. Each of the game’s four zones – styled after various aspects of the PS5’s architecture; GPU Jungle, Cooling Springs, SSD Speedway, and Memory Meadow – uses dynamic platforming and traversal to demonstrate the breadth and depth of the controller’s advanced haptic feedback, and most impressively, its incredible adaptive triggers. 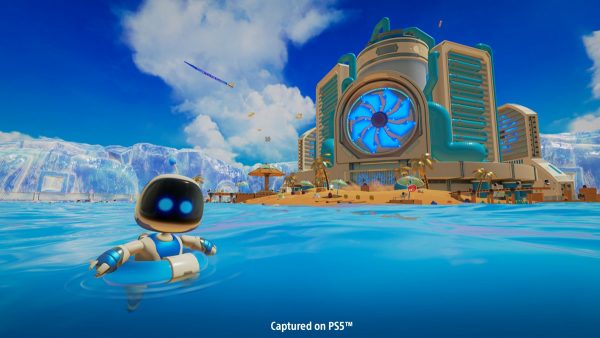 In the former case, you’ll feel a mild tip-tap as Astro Bot runs around, the feedback adjusting depending on the terrain; the fuzzy rumble of his hover beams firing on the ground below; and perhaps best of all, the distinct patterning of rain or sleet as it rumbles over the surface of the controller. As for the much-hyped adaptive triggers, you’ll need to give L2 and R2 a little extra force to command several of the suits and vehicles Astro is flung into – a springy mechanical frog and a grippy monkey, for instance – and also to fire an arrow from a bow.

Yet even once the immediate “wow” factor of the DualSense demo has worn off, Astro’s Playroom remains a remarkable effort in its own right from SIE Japan Studio’s Asobi Team. While hardly especially complex as platformers go, its three-ish hours remain consistently entertaining thanks to both the diversity of the levels on offer – ranging from traditional jump-and-collect-a-thons, to missions which place Astro inside a vehicle or suit, and even vaguely Kula World-inspired ones where Astro becomes a ball which must be controlled with the DualSense touchpad.

There are also brief asides where you’ll be asked to blow on the DualSense’s microphone in order to move a platform, though given how this functionality is probably the least impressive thing about the controller, it’s mercifully featured infrequently.

But for many the game’s true appeal will be its nostalgia-laced presentation, which it somehow executes without even the vague whiff of navel-gazing. Each of the four zones is filled to the brim with digital memorabilia of the four prior PlayStation consoles, and in addition to gorgeously rendered artefacts of each generation strewn throughout for players to collect, countless of Astro’s fellow bot pals can be spotted acting out classic PlayStation games.

It ensures that players are encouraged to stop and smell the roses rather than quickly get to grips with the DualSense and move on to “proper” games. In addition to the four zones themselves, there’s also a “PlayStation Labo” area which houses all of the collectibles you’ve nabbed up to this point, and allows you to spend accrued coins on a gacha-style goodies machine (though sans microtransactions, thankfully). 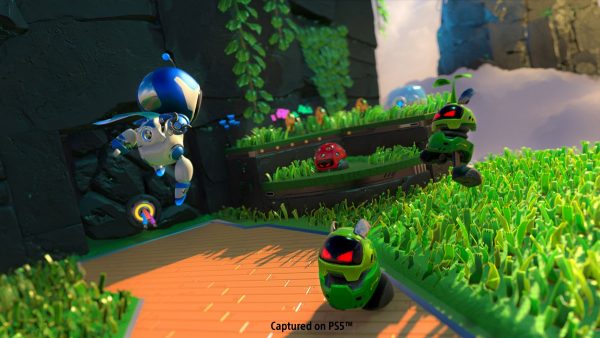 The result is an unexpectedly addictive title that’s teeming with replay value, whether to hoover up every last puzzle piece scattered throughout the levels which fill up a series of murals, complete the unlockable, leaderboarded time trials featured in the central hub area, or simply tick off the compulsive laundry list of trophy achievements – many of which you can get a helping hand with courtesy of the PS5’s new activity cards system.

As much as we’re likely a little while away from developers truly pushing the PS5’s technical capabilities, Astro’s Playroom nevertheless does a commendable job showing off what the console is capable of at 4K resolution and 60fps. The fact that Astro Bot is a mute character makes his physical expressiveness extremely important in defining how players relate to him, and thanks to both the fantastically slick animation and advanced visual acuity of his character model, he’s a thoroughly endearing presence throughout; as are the lovingly rendered environments, and of course, all of Astro’s buddies littered throughout them.

It’s not much of a leap to suggest that the game isn’t taxing the PS5’s horsepower too much, but as a primer to everything the console has to offer – including mind-bogglingly fast loading times – it proves an eye-popping leap forward indeed. Aurally, regular Sony composer Kenneth Young is back with another score comprised of jaunty, peppy licks, most memorably the distinctly Mario-esque tune that plays out during the time trial levels. Young’s work is also abetted by crunchy sound effects work throughout, much of which is transmitted through the DualSense’s own speaker and complimented by haptic effects.

If there’s any single complaint about the game – beyond the fact it leaves you wanting so much more – it’s perhaps that a few sequences prove slightly aggravating; rock-climbing in the monkey suit isn’t nearly as intuitive as the developers think it is, and the game’s back-to-back climactic boss fights probably could’ve used a checkpoint in-between.

Yet for its overwhelming majority, Astro’s Playroom is an outstanding introduction to the PS5’s key features and one you’d be a fool to miss under the pretense it’s simply another tepid, low-effort launch day freebie. Now we can only hope that Sony commissions a more expansive follow-up in its own right – assuming they haven’t already, of course – because this is simply too brilliantly executed not to become a mainstream IP in its own right. 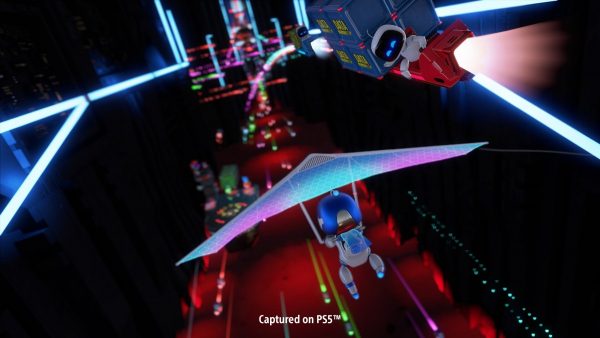 Pros:
+ A fantastic show-piece for the DualSense controller.
+ A loving tribute to 25 years of PlayStation history.
+ Terrific visuals and sound.
+ An impressive amount of replay value.