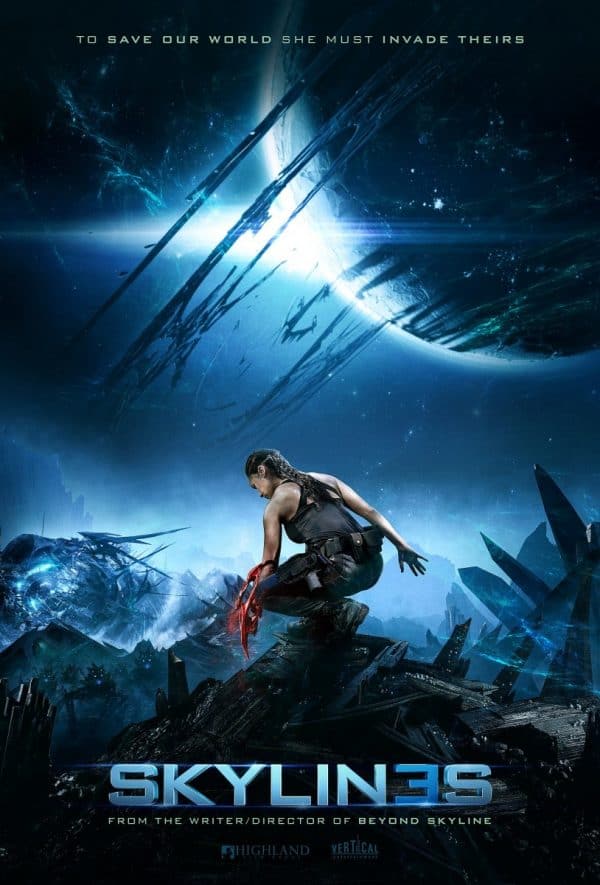 When a virus threatens to turn the now Earth-dwelling friendly alien hybrids against humans, Captain Rose Corley must lead a team of elite mercenaries on a mission to the alien world in order to save what’s left of humanity. 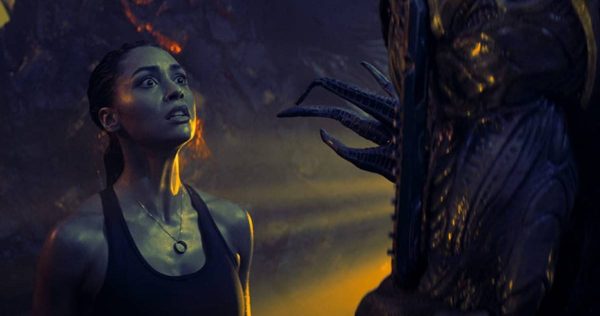 Who could ever have anticipated that 2010’s modestly successful – albeit critically panned – sci-fi action film Skylines would get not one but two belated sequels? In 2017, Beyond Skyline arrived with few expectations, and while hardly a truly good movie, was at least a notable step-up from the risible original.

Despite non-existent reports of the sequel’s commercial performance, three years later a most surprising threequel has surfaced. Though Skylines doesn’t ever rise above the constraints of B-movie schlock, it is nevertheless watchable, impressively well-produced genre guff.

The film picks up where the previous left off – and if you can’t remember, an opening montage handily reminds you – with a now-adult human-alien hybrid Rose (Lindsey Morgan) haunted by an impossible decision she was forced to make.

In London, some 15 years after the initial alien invasion took place, Rose is captured by General Radford (Alexander Siddig) and tasked with leading a mission to the alien planet known as Cobalt 1 to put a stop to a new alien virus set to destroy the co-existence between humans and extra-terrestrials on Earth. If Rose and her team of mercenaries can’t resolve the situation in 12 hours, London will be wiped off the map.

Though it can’t be underestimated just how much Skylines wants for the presence of the previous film’s kick-ass leads Frank Grillo and Iko Uwais, it does at least similarly benefit from its own laughably over-qualified cast. 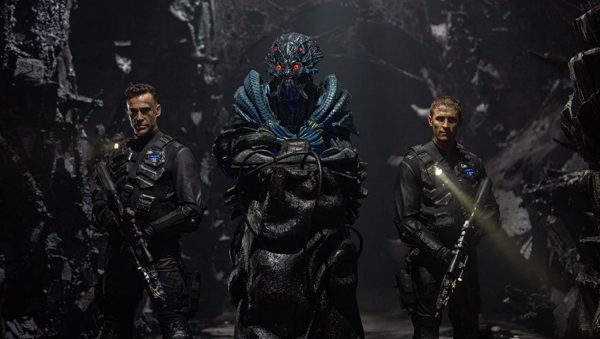 Much like the second film – though without quite the same giddily self-aware verve – this follow-up is an acceptably mediocre sci-fi joint. Half a live-action video game, half an Aliens-inspired bug hunt, it’s a shamelessly cheeseball sci-fi flick wherever characters, story, and especially dialogue are concerned, though at least rarely bothers to take itself seriously, even as returning writer-director-producer Liam O’Donnell attempts to build a genuine internal mythology.

What proves most diverting here – again, as with Beyond Skyline – is the shockingly solid VFX work O’Donnell has wrung out of his evidently low budget (for reference, the previous films cost around $20 million each, and we can safely assume about the same here). It must help immeasurably that the series is produced by visual effects artists Greg and Colin Strause – who also directed the first film – and were presumably able to help each scene be shot for maximum post-production efficiency. Their own VFX company, Hydraulx, also worked on all three films.

There are times where the effects work looks orders of magnitude better than you’d expect from this price point, and even when the larger-scale elements don’t always fully convince, on the balance of budget and ambition, it’s strikingly impressive all the same.

It’s a shame, then, that Skylines isn’t as much of a spectacle as you might hope, awash in exhausting expository dialogue for much of its first act, such that gas-filled dialoguing pads the runtime out to an unreasonably lengthy 110 minutes.

Though occasionally effective character development abounds – especially the opposition of Rose and her teammate Leon (Jonathan Howard), the latter of whom has a very personal bone to pick with her – for the most part the chit-chat is snoozily overdone. Perhaps the biggest creative mistake overall, though, is dividing the film’s cast between Rose’s space-faring mission and a tedious subplot back on the Earth’s surface. 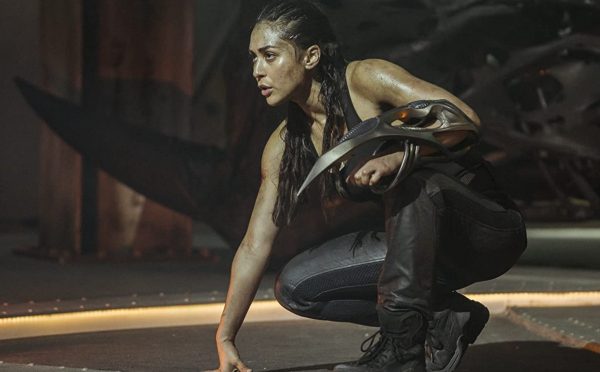 The cast at least makes an above-expectations commitment to the material, especially lead Lindsey Morgan, who renders Rose a fiery, likeable protagonist, not to mention an extremely capable physical specimen. Alexander Siddig is meanwhile having a great time as General Radford, and if perhaps not fully devouring the scenery is at least enthusiastically nibbling on it – particularly when Radford paraphrases J. Robert Oppenheimer’s famous “Now I am become death” speech.

By the time act three rolled around, I had to ask myself – do I care about these people or anything that’s happening? The answer, sadly, was a resounding “no.” All in all, for its relative visual splendour, splashy gunfights, and martial arts mayhem, I was left desperately wanting to see more of Grillo and Uwais’ characters from the previous movie.

Though the general production is never less than competent, Skylines‘ Syfy-calibre writing too often renders it a low-energy chore. All in all, it’s an impressive VFX show-reel considering the price-tag, if otherwise a fairly forgettable slice of kitschy hokum.

And yet, the series has gotten this far that it wouldn’t surprise anyone to see a fourth film released a few years down the line – it certainly sets one up – at which point audiences’ patience for humouring this bizarre experiment of a franchise may well have run out.