A troupe of hilariously self-obsessed theater stars swarm into a small conservative Indiana town in support of a high school girl who wants to take her girlfriend to the prom. 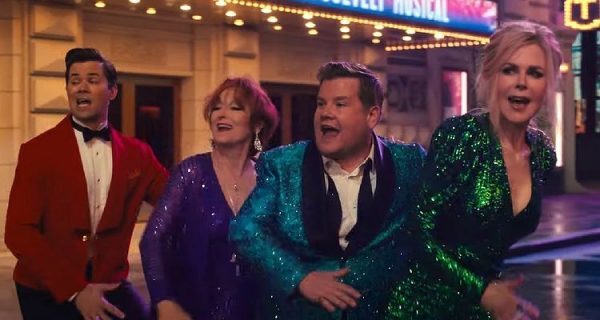 Before properly getting into why The Prom is an affront to everything from cinema to gay people, I do want to mention that coming into this musical I had no ill will towards director Ryan Murphy. He is blasted everywhere I look, but my only thorough experience with his work was his produced remake of Boys in the Band which I adored and still ranks among my top 25 of 2020. Needless to say, I came into The Prom with an open mind expecting some sort of honest exploration of gay dynamics in homophobic sectors filtered through extravagant song and dance.

Admittedly, half of that equation does come to fruition. Lensed by Matthew Libatique (consistently one of the best cinematographers in the industry) with an array of cotton candy colors, glamorously evocative costume design from Lou Eyrich, and equally robust, aesthetically pleasing expensive production design from Jamie Walker McCall, The Prom looks good. The dance choreography is another story entirely that looks ridiculous and like the performers were just told to flail their arms around without any real sense of rhythm or flow (it doesn’t help that the lyrics to most of the songs are fairly forgettable), but some serious Netflix money went into this and it shows. And as much as I hate this movie, you can’t deny the pleasantry of the visuals; the design of the titular prom at the end is beautiful and for a brief moment, I enjoyed watching all the characters dance. Truthfully, that might have also been because I saw the time remaining nearly ticking away to the five minutes of ending credits. Adapting Chad Beguelin and Bob Martin’s Broadway musical (they also write the script), Ryan Murphy simply seems utterly lost on how to make any of the story work from the beginning as we are introduced to a self-centered trio of Broadway stars played by Meryl Streep, James Corden (I guess garbage musicals around the holiday season is going to be his new trademark), and Nicole Kidman (a superfluous character seeking fame that could have been cut from the whole damn movie with nothing of importance lost aside from one of the better musical numbers) who, in the face of disastrous reviews centered on a play about the Roosevelts, decide to take up performative wokeness as a route to get back on track. That’s also not a joke on my behalf, it’s actually what they do.

There is one laugh to be had if you pretend their manager reading off some scathing criticisms to James Corden’s Barry is cherry-picking quotes from Cats reviews, but nevertheless, Dee Dee (Meryl Streep), Barry, and Angie (Nicole Kidman) surf through what’s trending on social media to find that a high school prom in Edgewater, Indiana is being canceled due to one of the students, Jo Ellen Pellman’s Emma, being gay and planning to bring a girl as her date. With the help of former sitcom star Trent (Andrew Rannells, a regular collaborator of Ryan Murphy and who gets one of the only songs that’s actually enjoyable in a number hilariously pointing out religious hypocrisy that also is one of the only moments here grounded in a place of reality that’s fun and not cloying trash) they pack up to make some noise in the regressive town for easy publicity. This review already speaks to one of the greatest flaws with The Prom in that it’s more about bloodsucking celebrities leeching off a sad situation for personal gain. The script tries to make jokes about how out-of-touch celebrities are with the real world, but for at least half of the running time, you’re silently screaming wanting to go back to getting to know the characters that have real problems. For example, Emma’s girlfriend Alyssa (Ariana DeBose) is expected to be a role model student with her mother (played by Kerry Washington) as part of the PTA ensuring school activities remain pure. In other words, her mom has a strong fear of the gays, whereas Emma’s parents actually abandoned her for coming out. Nonetheless, it’s easy to see why Alyssa is scared to come out (something I can’t really say about another recent lesbian offering). Sounds like some interesting things to explore for these two characters, but alas this movie has other things on its mind.

However, there’s a foul odor of bullshit surrounding the whole dynamic given that this is also a secretive interracial relationship, which feels like another thing these two should be concerned about when coming out as a couple. Apparently, homophobia exists but not racism in this hoity-toity privileged town that feels stuck in the 1960s when it comes to sexuality. With nothing against Ariana DeBose, who is actually good whenever the material gives her something to do, it’s distracting that a Black actor was cast only to make the movie about homophobia and not also racism considering those two belief systems often circle one another. The reason is simply that The Prom exhibits the exact same fucking behavior the musical is trying to condemn; it’s as performatively woke as its characters and it wouldn’t shock me one damn bit of some of the cast members also signed on for the reasons their characters are being ridiculed. Meryl Streep is a national treasure, and maybe she is committed to the cause, but more than anything she’s committed to Oscars meaning that here she is playing a version of herself that could be more real than parody (the latter is intended and doesn’t work). Of course, all of these characters have their own redemption arcs, which is also fumbled to a degree so offensive I genuinely don’t understand how someone can be gay and think certain things about the way characters redeem themselves are okay. Not only is there a scene where the Broadway stars casually admit to Emma they only came here for publicity before legitimately getting swept up in the cause for real (something you think she would be outraged about), but one character decides to accept gay people not from the good of their heart or because it’s simply morally right to do so, but only for personal reasons. The cherry on top is that Ryan Murphy is gay himself and should know better than this junk.

That’s without even getting into side plots that see Dee Dee developing a romance with school principal Mr. Hawkins (Keegan-Michael Key, who seems to be the only one trying to inject something real into this hollow mess) and backstory for Barry that is so mawkish and embarrassing you will be happy the role didn’t go to an actor that’s actually gay. There is sweetness in the idea, but the overstuffed scale just takes away even more from the story of Emma and, to a lesser extent, Alyssa. The Prom is clearly supposed to be their story but gets buried in it underneath the troubles of fictional Broadway stars, heterosexual romantic subplots, empty criticisms on celebrities, and a third act transition that refocuses the narrative on Barry. Repay the favor and bury The Prom at the bottom of your Netflix queue.