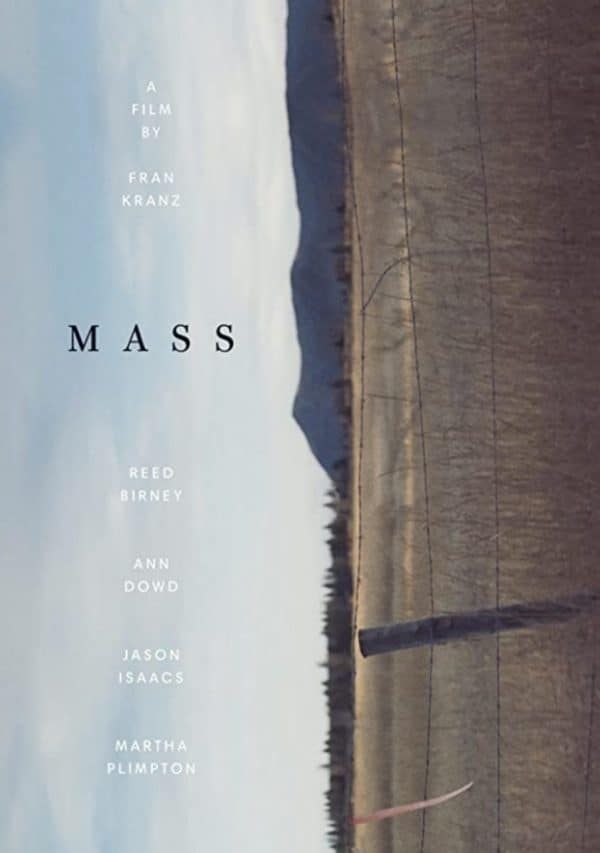 Years after a tragic shooting, the parents of both the victim and the perpetrator meet face-to-face. In the wake of any tragedy, those affected scramble to make some sense of what’s happened in order to move on with their lives, but as Fran Kranz’s powerful directorial debut proves, the road to catharsis is anything but straightforward.

Mass takes place almost entirely inside a single church meeting room as two couples, Richard (Reed Birney) and Linda (Ann Dowd), and Jay (Jason Isaacs) and Gail (Martha Plimpton), convene to confront the shared demons of their past. Years prior, Richard and Linda’s son committed a school shooting resulting in both the death of Jay and Gail’s son and his own suicide. Now, years away from the suffocating media blitz and laboured legal wranglings, the four hope to pore over the issue one last time and each find some measure of peace.

Given the aggressively stripped down approach to staging and camerawork, you’d be forgiven for assuming Kranz’s original script was adapted from a play, so intently focused as it is on what happens between four people for 90 minutes inside a plain room. But Kranz’s astute eye for capturing his performers at their most excruciatingly vulnerable ensures it’s difficult to picture the story being presented any other way.

If Mass begins with a slightly overlong 20-minute prologue focused on the minor rigours of setting up the meeting room and getting the two families together in the same space, it serves the purpose of confirming the emotional import of this meeting. As the church workers fuss over things as seemingly mundane as the placement of a tissue box, it’s clear they know they’re handling an unexploded emotional bomb.

From the meeting’s first moments, Kranz and his cast lock audiences in a hypnotic gaze, the early introductions suffused with veiled pleasantries that soon enough snowball into discussions about gun control, mental health, violent video games, education, the media, religion, and most abundantly of all, parenting.

We as a society have a desire to find meaning in most everything we witness, especially loss we can’t otherwise see as anything but senseless. An inability to countenance the idea that things just happen is core to the provocative discussions throughout this searing drama, with Richard and Linda incredulous that they never saw it coming, while Jay posits whether their son was simply “evil.”

Franz deserves enormous credit for confronting some extremely challenging emotional ideas that society would prefer not to speak aloud. In a climate that considers whether we should “disarm” predominantly white spree shooters by denying them oxygen and effectively erasing them from existence, Kranz turns a sympathetic ear to this shooter’s parents, as Richard hauntingly remarks, “The world mourned ten kids, but we mourned eleven.”

But whether audiences at large can entertain the idea that the perpetrator was himself a victim – a byproduct of a broken American mental health system, perhaps – Franz powerfully elucidates just how difficult the pursuit of closure truly is. These four people are clearly in emotional freefall, their early discussions defined by vague passive-aggressiveness and over-specific dissections of each other’s precise language. It represents not only anger but also a patent inability to understand how the other side truly feels, no matter how hard they might try.

Truth is elusive at the best of times, and in this case the only person who might shed some light on the instigating incident isn’t alive to do so. But even then, would any explanation ever be truly satisfactory? Nothing these people do will guarantee their emotional freedom.

Despite the four-hander being fixed so rigidly, Kranz’s script impressively sidesteps excessively prosaic, stage-y cliches as is so common with chamber pieces. The central discussion-cum-argument feels discomfortingly realistic, especially as it becomes clear we’re not so much dealing with the perspectives of two “sides” as we are four, given the differing opinions within the couples themselves.

And what a quartet Kranz has gathered here, all of whom turn in arguably the finest performances of their respective careers. Plimpton’s Gail is a picture of simmering anxiety and subtle heartbreak, counter to husband Jay, whose scarcely contained exasperation builds to bouts of explosive rage.

But the most head-turning work is surely that of Ann Dowd’s Linda, a broken woman struggling to reconcile her son’s actions with the baby she loved and raised. Dowd’s entire performance is awash in naked honesty, though it’s her contrite final declaration that’s sure to leave audiences wiping away tears.

If Reed Birney is given the most guarded and reserved character of the quartet, he nevertheless does a wonderful job portraying a man still coming to terms with the manner through which his son was able to keep his true self hidden.

Making a film of this aesthetic restraint remain visually interesting is much harder than it looks, especially for a debuting filmmaker. And yet, Kranz shrewdly exploits the furrowed contours of his actors’ weathered faces, closing in tight to ensure maximum emotional coverage. By giving his actors the floor and keeping tight with them, Kranz doesn’t waste a single inch of camera movement.

An uncommonly nuanced and compassionate meditation on how people deal with tragedy, Mass is a stunning showcase for both director Fran Kranz and a never-better acting quartet (especially a devastating Ann Dowd).