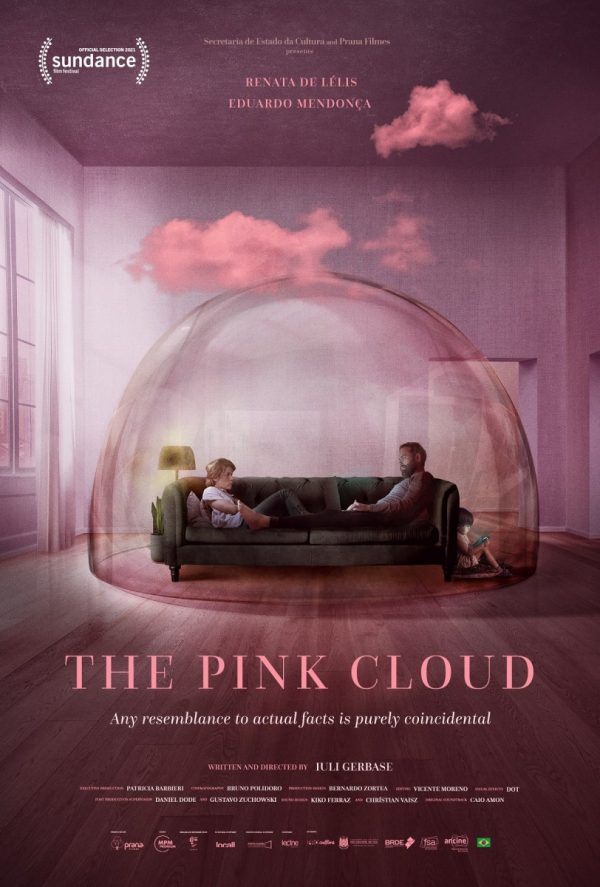 After a toxic and mysterious pink cloud appears, Giovana finds herself stuck in a flat with a man she just met, changing her life in a way she never expected.

Though it’s surely inevitable that the next few years will usher in a cinematic era packed to the gills with movies inspired by the current global pandemic, there are also a number of serendipitously prescient pre-coronavirus films still trickling out, perhaps the most beguiling of which is Iuli Gerbase’s The Pink Cloud.

The similarities to the ongoing worldwide predicament are staggering enough that an opening title card even assures viewers it wasn’t hastily shot last year in a crass bid to exploit the pandemic; rather, it was written in 2017, filmed in 2019, and so any resemblance to actual events is purely coincidental.

One of the film’s very first sights is of a young woman walking her dog in the early hours of the morning, when she encounters a mist-like pink cloud which within seconds causes her to drop dead on the spot.

Literally overnight, the cloud – the origins of which are never explained – has spread around the globe, where it will kill anyone who comes into contact with it in just 10 seconds. And so, people have no time to react, forced to hunker down wherever they are and make the best of it.

Gerbase’s protagonists are Giovana (Renata de Lélis) and Yago (Eduardo Mendonça), two Brazilian strangers awakening from a boozy hook-up to find themselves forcibly sheltering under the same roof – no walk of shame allowed. As the time passes with no end to the enduring lockdown in sight, the pair grow closer, embarking on an unconventional romance which tests the bounds of what they truly desire.

From its opening moments, The Pink Cloud is an eye-catching film for how thoroughly – yet inadvertently – it captures the mood of the last year. The airy shots of empty streets are just the beginning; this is a film littered with eerie familiarity, particularly how much of our personal rituals have been transitioned to the digital realm via Skype calls – nobody knew what Zoom was in 2019, remember – both for work and social interaction.

But what takes Gerbase’s film to a level beyond mere curious coincidence is how aptly it captures the emotional undercurrent of a real lockdown situation. Though citizens’ basic needs appear to be taken care of – through delivery tubes installed by a drone on the sides of everyone’s homes – mental health decline runs rampant as loneliness, paranoia, and fear take hold.

One of Giovana’s friends memorably remarks, “antidepressants won’t bring other people to my house,” exacerbated by the implication of a feckless governmental response and also the fact that there’s little indication of when the cloud might pass. 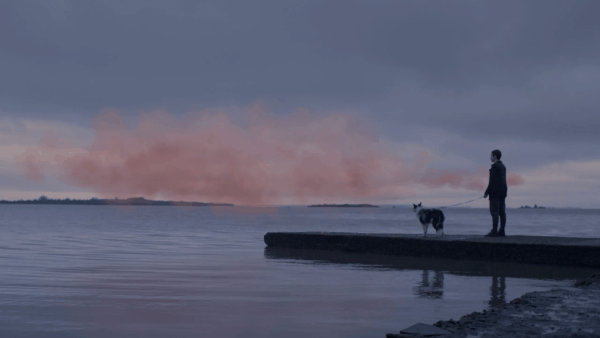 Social media misinformation spreads like wildfire, the youth lament their formative years being wasted locked inside, while the elderly are largely left to their own devices without outside help. Beyond the obviously crippling impact on mental health and the economy, people come to miss even the dull or frustrating aspects of “normal” life. That all of these happenings have occurred in the wake of COVID-19 speak to the emotional intelligence of Gerbase’s script.

Even more impressively than how Gerbase captures a snapshot of global turmoil is how expertly she depicts the slippery passage of time we’ve all felt since March 2020. Vicente Moreno’s expert editing creates a dreamlike flow of time in which Giovana and Yago’s relationship is expedited, yet we’re never quite sure exactly how much time has passed. Several terrifically crafted montages show the resignation and cynicism setting in with flecks of dark humour, and just like life over the last year has felt both fast and slow at the same time, so too does the movie.

Despite the potential for the central romance to come off cutesy or contrived, its down-to-Earth nature, aided by a pair of terrific performances, ensures it always feels emotionally authentic. The chemistry between De Lélis and Mendonça convinces throughout in both fiery, passionate love-ins and explosive arguments, their clashing worldviews and the mere contempt bred by familiarity generating a wealth of trenchant drama. Though the confined setting ensures this dynamic is intensely intimate, the manner through which Gerbase depicts time slipping away makes it quietly ambitious in its own way.

It is fair to say that the subject matter may simply be too real for some right now, though the situation depicted here is at least considerably more dire than the real pandemic. Moreover, there’s a delicate tonal buoyancy to Gerbase’s script, taking a pragmatic approach to the highs and lows of lockdown life, sprinkling black comedy amid its more crushingly honest observations – particularly that a dropped WiFi connection can feel like the end of the world. Excellent pacing – again, thanks to the judicious editing – ensures there’s always a new wrinkle being introduced to the couple’s predicament. 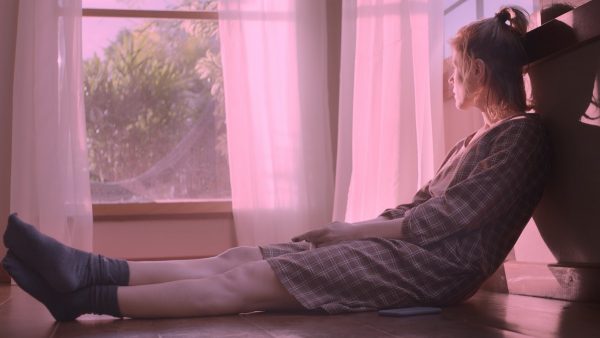 In terms of aesthetics, composer Caio Amon delivers a musical score that’s alternately playful and foreboding, while Bruno Polidoro’s crisp lensing elevates the mundanity of confinement through pervasive use of gorgeous pink filters, depicting the cloud’s literal tinting of the world’s skyline. Gerbase’s direction may not be particularly showy, but her restraint and willingness to hold long on her actors – particularly De Lélis, who is outstanding here – allows her to make the most of her high concept without the need for splashy VFX sequences.

The elliptical resolution is sure to divide even viewers who were thoroughly invested in the film up to that point, though no matter the outcome, the deeply felt, expectation-defying drama and strong two-hander between its leads makes this an uncommonly captivating sci-fi drama chamber piece.

Even ignoring its extreme relatability amid the real-world pandemic, The Pink Cloud shrewdly examines how delicately the global status quo we all take for granted is maintained.