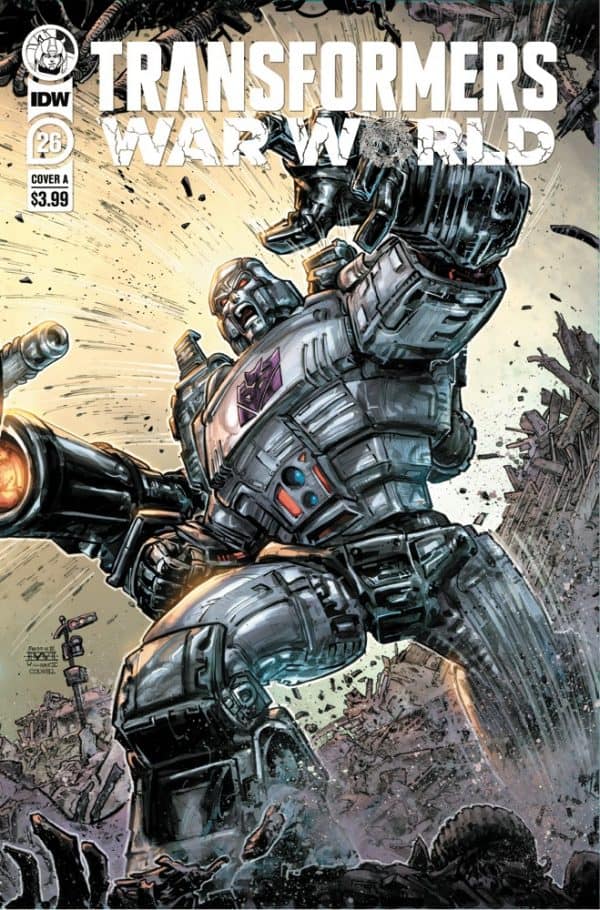 After the explosive quarter anniversary issue, Transformers #26 is something of a breather as Megatron and the newly christened Optimus Prime gather their forces to stake the future of Cybertron. There’s a fair bit of tension as they make their moves while Brian Ruckley pays off on some story threads he planted long ago with absent or little used characters finally playing more of a role.

While Optimus was only in a couple scenes of the issue, the transition he’s made between being Orion Pax and the new Prime is pretty seamless. Ruckley writes Optimus well as a confident leader, yet also one who recognizes that he does have have any divine right to rule even though he bears the Matrix of the Leadership. It is a pretty stark contrast already between him and the recently deceased Sentinel Prime, who was presented as a very arrogant and uncompromising figure in their system. It feels very much in character for Optimus to think this way as well as empathizing with Sentinel over the burden of the Matrix.

Megatron, meanwhile, tried shoring in his gains and creating loyalty outside his personal ranks with fear. Ruckley has done some splendid work with Megatron throughout his run and continues to do so as Megatron settles more into the role as a tyrant. His ruthlessness is showing more as he makes the division between those who are loyal to him and those who are more unwilling or neutral. Nowhere does this show more than his scenes with Starscream, as the scheming Decepticon tried applying his usual tricks on Megatron, and his former mentor Termagax, who resurfaced from her self-exile to try prying her former Ascenticon movement away from insanity. Both scenes show how far off his originally noble path he’s come already. Or, as Termagax points out with some very interesting and pointed insight into Megatron’s character, perhaps Megatron never truly cared about the cause he and others were fighting so hard for, but for his own needs, ambition and power. His immediate reaction to Termagax’s thoughts are just proof how correct she is.

Anna Malkova’s artwork is again quite detailed and animated. The body language she uses to convey Megatron’s threatening demeanour or Pyra Magna’s authority is well done. Even in an issue with very little action, her character work is great to look at for how she is able to utilize the characters. David Garcia Cruz’s colours compliment Malkova’s artwork well with vibrant colours throughout, from the way the characters look to their settings. With the escalation of Megatron’s power and the war about to fully break out, it will be very interesting to see how the artwork from Malkova and Cruz evolves with the ensuing chaos.

Transformers #26 is a nice breather issue that still delivers some great character development. Its examination of Optimus Prime and Megatron’s growing power and how they each handled the responsibility is both interesting and in character with Ruckley’s writing. The artwork from Malkova and Garcia is great to look at with its level of detail and only makes anticipation for what comes next grow.