We are not in Kansas anymore, as Marvel goes full Cinematic Universe with added Easter eggs. Using flashback to tie things together, WandaVision broadens the narrative canvas, introduces new chess pieces into play and goes more than a little meta. Links are forged to entries in the franchise cannon, while emotional issues are unpacked.

Avengers: Endgame and its aftermath sit at the centre of this episode; fundamentally this is a story about loss and how people process their grief. For Wanda Maximoff the coping mechanisms are slightly more excessive than most. Her desire and ability to keep love alive has psychological spawned something simultaneously staggering, yet emotionally grotesque. Beyond the minute one reveal, where writer Jac Schaeffer deliberately invites audiences behind the Marvel curtain, there are far darker things at work.

Teyonah Parris has more time on the playing field as Monica Rambeau, finally providing context for a show which was defined by nothing obvious. Colourised helicopters, static radio noise and symbolic pendants now feel relevant. Alongside that, audiences are given their introduction to the S.W.O.R.D. headquarters, as well as a peak at the post-Endgame set up. For the savvy amongst us, what WandaVision also does is get newbies up to speed on events so far.

In a story telling move which makes perfect sense, WandaVision is rediscovered within the show courtesy of Kat Dennings’ Darcy Lewis. It is a masterful writing move which subtlety ties everything together, increases dramatic impact and ensures audiences continue to invest. Viewed from the outside looking in through a literal television, it finally hits home what fans are being asked to deal with. This a very personal response to the events which unfolded prior to that world altering gauntlet snap. 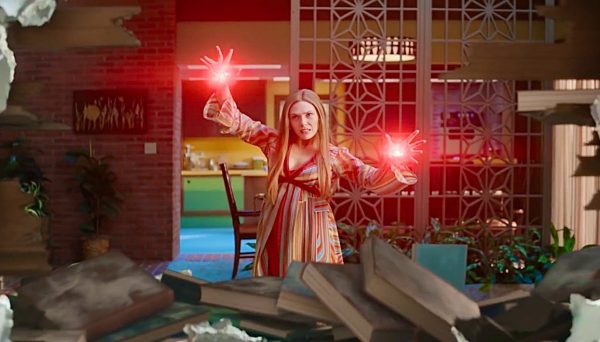 Flashes of Wanda’s reality are brought home in those minutes by a masterful control of tone. Paul Bettany and Elizabeth Olsen do so much with so little in the smallest amount of screen time, yet pack an emotional punch around gut level. There may be inquisitive onlookers outside looking into Westview, but what exists beyond that town boundary is terrifying. Delusion, denial and a cast iron defence mechanism are working hard to ensure Wanda’s vision dominates.

Surrounded by a supporting cast of government operatives, controlling reality through an intricate sitcom construct and keeping the real world at bay will have consequences. What this episode has done is light a fire under WandaVision, tying it intentionally into a multiverse with far reaching cinematic ramifications. If the upcoming slate including The Falcon and the Winter Soldier displays similar amounts of savvy, then Marvel may yet conquer television as well.