A far-ranging look at the biases in how we see things, focusing on the use of police body cameras. 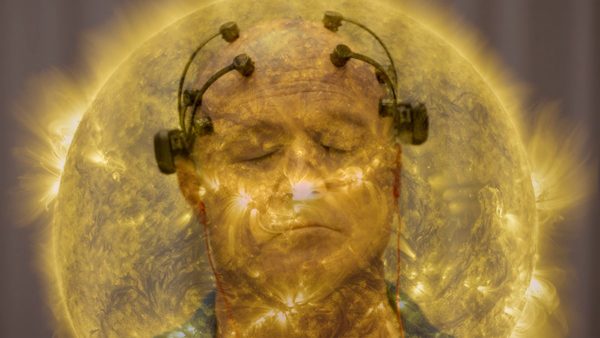 Probably the only film in Sundance history to begin with a shot of the director’s own eyeball, All Light, Everywhere is the latest project from acclaimed video essayist Theo Anthony (Rat Film), and scooped the festival’s U.S. Documentary Special Jury Award for Nonfiction Experimentation.

Anthony’s new film is concerned with unraveling the assumption that everything we see through our eyes is an “objective” experience, that what the miracle of sight grants us is really anything but, as supplemented with the various video technologies through which we additionally mediate our lives.

Achieving true objectivity in any field or discipline is incredibly difficult, and perhaps no more so than where our perception of the world around us is concerned. Anthony uses this as a leaping-off point to examine a society increasingly governed by surveillance, focusing in particular on the use of police body cams to present a supposedly unbiased view of engagements between the authorities and the public.

Snaking through the film is Anthony taking an extended tour of Axon HQ, the company best known for popularising the taser and, in more recent years, the body cam. The almost parodically soulless office building looks like something ripped straight out of Verhoeven’s RoboCop, while chirpy, authoritative Axon spokesman Steve Tuttle stops just short of becoming a caricature.

One senses he loves the smell of capitalism and freedom in the morning, but he’s also at least self-aware enough to admit the utility of the camera as a weapon, freely noting that the very camera Anthony is pointing at him is changing his own behaviour in real time. Tellingly, as one of the film’s historical cutaways informs us, the world’s proto-cameras were in fact called “photographic rifles.”

Tuttle underlines the fascinating non-truth of body cams, that they’re intended to align with human perspective rather than extend past it, no matter the fact that in reality they’re far from a 1:1 account of a police officer’s encounter with a perp. Namely, the wide angle lens makes subjects look closer than they actually are and their movements appear more severe, both of which can obviously work in a cop’s favour.

Anthony argues with measured passion that body cams are really just another instrument for the state to build a self-serving narrative; it’s not continuously recorded, officers are allowed to watch the video before giving a statement to “brief” themselves, and an ever-smartening A.I. archival system continues to remove humans from the process of storing and interpreting this information. It paints a sobering if not genuinely frightening picture of both the future of law enforcement and society at large.

Elsewhere Anthony examines another terrifying angle by speaking with Ross McNutt, the founder of Persistent Surveillance Systems, who is busy trying to sell his Orwellian “eye in the sky” technology – offering a bird’s eye view of a region in real time – to the city of Baltimore. Despite the not-great video quality, it’s still an achievement as unsettling as it is impressive, seemingly unlocking a new era of “urban pacification” that the Baltimore locals are unsurprisingly none-too-happy about. Equally not-shocking is that McNutt was eventually given the green light to trial his technology in the city.

If the dubious veracity of our eyeballs and recording technologies are the prime focus here, the film really speaks to a wider suggestion that everything you come into contact with – including your news sources – should never be beyond scrutiny. By looking back to the early history of both the camera and criminal cataloguing, Anthony threads a convincing argument that motivated, subjective perspective has always driven human “progress” and the so-called advancement of civilisation.

At film’s end Anthony even ingeniously loops back around to the artifice of his very documentary itself, which nearly swallows its own tail entirely by showing the Adobe Premiere editing workflow for the very thing we’re watching. Hell, even the end credits are literally just screen captures of Anthony scrolling through a few RTF documents. The slightly playful provocation seems to be that even the director’s lucid, cogent argument should be doubted and dissected.

The body cam aspect alone is so fascinating it could probably fill an entire documentary, and some of the more discursive historical discussions do feel a tad unfocused, such that the 105-minute runtime has an undisciplined tang to it. But on the flipside, this is far from the dry video essay the uninitiated might be expecting, but rather a disturbing, witty, and daring slice of poetry-cum-philosophy that demonstrates a real clarity of vision on Anthony’s part.

Theo Anthony’s noodle-baking documentary cannily examines the various means through which we all filter our experiences of the world – experiences which are far more subjective than most of us will freely care to admit.