A group of seniors train to become police officers and Border Patrol agents at El Paso’s Horizon High School, near the U.S./Mexico border. 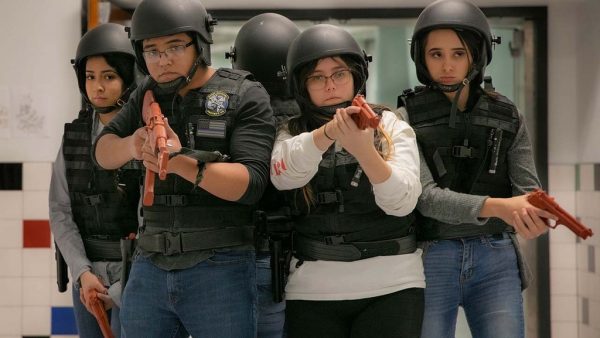 Documentaries about the American experience often prove especially eye-opening to outsiders, and that’s certainly the case with Maisie Crow’s (Jackson) new film At the Ready. But what makes this more than an excuse for non-Americans to gawk at the country’s bizarre socio-political structure is an ever-compassionate attitude to the focal subjects.

An opening title card informs us that by 2018, more than 900 schools in America offered law enforcement education. 10 miles from the U.S.-Mexico border, the students of an El Paso, Texas high school are enrolled in just such classes, where they’re effectively placed on a track that will allow them to pursue careers as police, Border Patrol, or customs officers straight out of school.

Crow focuses on three students in particular. There’s Mason – who goes by the name Kassy for most of the film before coming out as trans in the end credits – who feels compelled to hide his true self from his largely absent, conservative parents; Cesar, a young man struggling with a fractured home life after his criminal father was deported back to Mexico; and Cristina, a peppy graduate who, counter to Mason and Cesar, receives huge encouragement from her parents to pursue a career in law enforcement.

From the film’s very first moments, it’s a shocking sight to witness kids acting as cops or in cop-adjacent roles; what in any other context might seem like play-acting is rendered disconcertingly real here, the hordes of youngsters running around their school halls in formation while being taught tactics from their teachers who are mostly former officers.

Though this is an after-school club which positions the best-in-class to face other clubs in a competition, the legitimate weapons and tactics techniques they’re being taught, where their teacher freely talks about “lighting up” aggressors, are very pointedly preparing them for future careers in law enforcement. The mock raids, where the kids look like they’re playing dress-up, should be comical, yet the flippancy with which they’re taught the dubious-at-best particulars of no-knock breaches robs the footage of most potential mirth.

The question quickly becomes – will these youngsters manage to maintain their humanity, or will they lose themselves in a system designed to produce an army of blunt state instruments? The deck is certainly stacked against them, given how thoroughly Crow depicts the casual insidiousness of creating a pathway from school to law enforcement before young people have had much chance to think for themselves.

In some cases the high schoolers are encouraged to avoid college in favour of what is effectively a cottage industry that seeks out malleable young minds. The allure of earning over $50,000 in the first year alone without the need for a college degree – rising up to $100,000 after five years – speaks for itself, especially for those living in fraught circumstances.

And so, it’s easy to see how this club feels rather cult-y at times, unaided by the numerous instances kids and teachers alike speak of it as a “family.” Mason, with little home support and few friends, literally sought out the club to connect with people, and with that comes a dependency which he struggles to pull away from as he begins to bristle with the club’s inherently conservative values.

If this makes Crow’s film sound incredibly partisan and one-sided, she deserves credit for raking through the issue in all of its complexity. Rather than paint law enforcement as an abusive monolith, she captures the agony with which individuals try to reconcile and perhaps compartmentalise personal opinion with practical realities. This becomes much tougher, however, when Donald Trump strives to militarise the border, kids are thrown in cages, and of course, Ted Cruz defeats Beto O’Rourke during the 2018 Senate election.

In this regard Cristina goes through perhaps the most interesting growth of the three teenagers. Her parents are enormously proud of her for pursuing this line of work, yet she appears to have a moment of clarity after realising that illegal border crossings aren’t only concerned with drug dealers and adults, but also children whose parents are trying to grant them a better life. Cristina notes the irony that in pursuing her own dream, she’s crushing somebody else’s, and it clearly pains her deeply.

This pain provides solace that, even those subjects who do decide to stay in the program at film’s end, won’t so quickly lose their faculties of empathy and resolve, which are really at the core of being “good police.” Other students aren’t quite so promising, admittedly; some of her classmates exhibit a shocking amount of cognitive dissonance where the status of immigrants are concerned, even if it’s certainly insightful to see such multi-faceted perspectives from the largely Latinx community.

Crow also speaks briefly to the teachers themselves, one of whom gives a devastating confession-to-camera where he admits to sugarcoating the trauma that comes with the job and thoroughly accepting the hypocrisy of that. Now suffering from PTSD, divorced, and not seeing his kids enough – all due to the job – it paints a sympathetic picture of what those on the frontline go through, even if it’s easy to view them as a singular “enemy.”

Crow’s intimate classroom filming really accentuates the strangeness of the film’s subject; focusing so intently on the fresh, young faces – some of them still wearing braces – really underlines how industriously America wants to mould its youth to serve the state and, in essence, do as little thinking for themselves as possible.

But Crow doesn’t merely simplify the subject into binary terms, leaning instead into a more soupy morality where every person has to decide for themselves what level of personal compromise, if any, they’re prepared to put up with. There are good and bad people in every line of work, of course, but should they be let off the hook if they willingly submit themselves to become tools in a broken, adversarial system?

The outcomes for Mason, Cesar, and Cristina aren’t often what you’d expect, but create a somewhat hopeful picture that intelligent, empathetic youngsters will indeed think for themselves rather than be listlessly shepherded into a dispassionate, uncaring adulthood.

Despite its deeply unsettling undercurrent, At the Ready succeeds in depicting its young subjects with sensitivity and understanding.