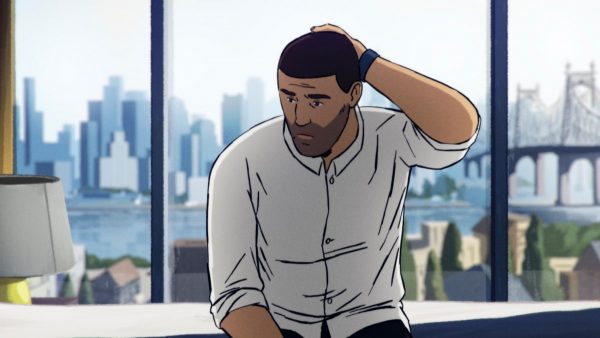 Amin arrived as an unaccompanied minor in Denmark from Afghanistan. Today, at 36, he is a successful academic and is getting married to his long-time boyfriend. A secret he has been hiding for over 20 years threatens to ruin the life he has built for himself. For the first time he is sharing his story with his close friend. 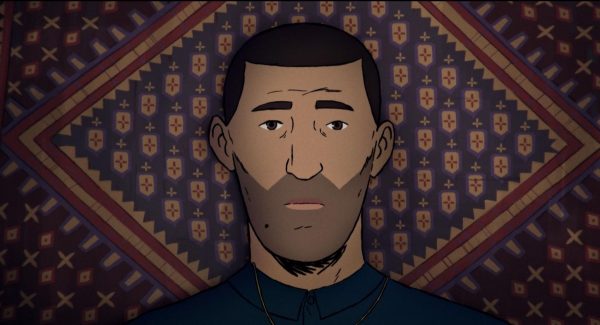 Though presented as a true story, an opening title states that some names and locations have been changed in order to protect the subjects. Our “protagonist” is Amin, who spends the film detailing his escape from the mujahedeen in Afghanistan, ultimately forced to slingshot around numerous countries in pursuit of terra firma.

Rasmussen, a friend of Amin’s, is tasked with teasing the discomforting – and at times, seemingly unreliable – story out of him, one which he has kept so private that not even his loving partner, Kasper, is aware.

Across Flee’s dense 83 minutes, Amin retells his embattled youth in Afghanistan, where he allegedly saw family members either disappear or, in the case of his older brother, abscond to Sweden to avoid army conscription.

With the arrival of the mujahedeen in the country, Amin, his mother, and his other siblings flee to Russia, where their freedoms as illegal residents are strictly curtailed. But Amin and his family are promised a better life by his older, Sweden-settled brother, the catch being that smuggling even a single person there is exorbitantly expensive.

It is at this point that Rasmussen so powerfully harness the horrors of a refugee’s journey, devastatingly depicting Amin’s sisters’ trip to Sweden in a shipping container, one they only scarcely survived (and many others weren’t so lucky). Amin’s own attempts to reach Sweden aren’t much easier, a confluence of dire circumstances causing him to be pinballed between various nations, before the grim reality dawns on him – even if he’s successful, he’ll need to effectively erase his current identity and start anew.

Amin’s story would certainly be plenty gripping as told in matter-of-fact live-action – perhaps disguising Amin’s face with the impressive deepfake tech used in last year’s Welcome to Chechnya – but in animation, it becomes something else entirely.

If sure to bring to mind Waltz with Bashir’s own mesmerising animated documentary format, Rasmussen’s film is a little more free-wheeling where style is concerned, switching up between carefree handrawn (or possibly rotoscoped) animation and, in its more emotionally shattering passages, shadowy, un-detailed scrawlings as if to reflect Amin’s own mentally fractured perception of the traumatic events.

Rasmussen fluidly switch-foots between these animated styles and occasional slivers of live-action, rather than saving the latter for a closing gut-punch as was the case in Waltz with Bashir. Horrifying newsreel footage captures the frantic urgency of Amin’s initial escape from Afghanistan, though surprisingly enough there’s no marquee penny-drop moment in the film where the animation dissolves away to reveal a shocking live-action “truth,” perhaps sensing that it was done so masterfully in the aforementioned doc.

Amin’s story is further complicated by his homosexuality, repressed enough in Afghanistan at the time that it “didn’t exist” – as in, there literally wasn’t a word for it. But that did nothing to stop Amin staring longingly – and hilariously – at his bedroom poster for Jean-Claude Van Damme’s Bloodsport on a nightly basis. Yet despite the cutesy levity this brief aside affords, we’re never allowed to forget the added layers of fear and paranoia Amin’s sexuality adds to his story.

This is best elucidated by the fact that one of his former partners even threatened to report him to the authorities after discovering aspects of his asylum status were a lie. Coming out to one’s family within the dual-context of being Afghan and a refugee, then, is uniquely challenging, but builds to a deeply touching payoff. And that’s Flee in a nutshell; an incredibly upsetting story albeit one topped with faint flecks of hope and humour, foregrounding the indomitable nature of the human spirit.

Rasmussen’s film is a singular reminder that refugees aren’t any one country’s “problem”; it’s a global, humanitarian issue, as much as many prefer to simply turn a blind eye to it. Ultimately, this attitude only exacerbates and elongates the dehumanising process people are forced to put themselves through in order to secure the most basic semblance of safety.

Flee conveys the horrors of the refugee experience with artistry matched only by its empathy, its imagery both live-action and animated proving tough to shake.