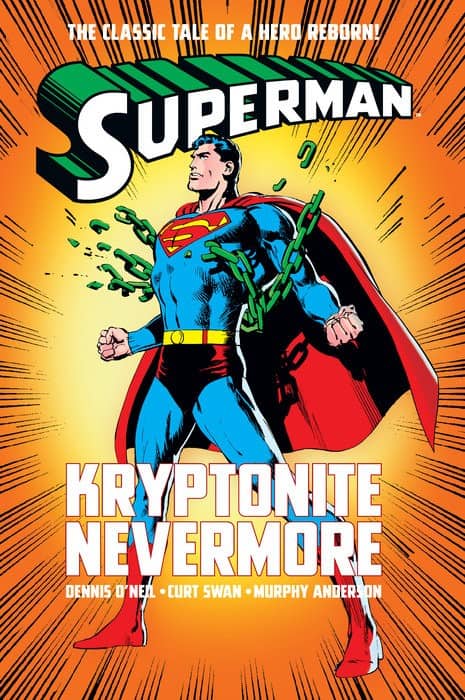 One of the most common pieces of knowledge regarding Superman is his weakness to Kryptonite, radioactive pieces from his home that are the only other thing to have survived the planet’s destruction. The concept of Kryptonite has even made its way over to wider pop culture to be used as slang for someone’s weakness and referenced in television, songs and other media. But what if Superman was no longer affected by the green rock? What if he lost his Kryptonite? That is the question comics legend Denny O’Neil, who passed away last year, explored in his classic and groundbreaking story Superman: Kryptonite Nevermore. To celebrate its 50th anniversary, DC has put together a new collection of the famous story written by O’Neil and drawn by the equally legendary Curt Swan, making this a book fans of Superman should pick up.

After an experiment gone wrong renders all Kryptonite in Earth inert Superman is as strong as he’s ever been now that he no longer has a weakness. However, his powers seem to fade randomly as he is followed by a mysterious figure. Superman’s life gets complicated both as a superhero and as reporter Clark Kent as he transitions from print media to television reporting, causing even more problems for his double life. With his invulnerability in question again and the mysterious figure hounding him, Superman is tested in ways he’s never been before.

O’Neil’s early career is known for returning Batman to his Dark Knight roots and reshaping Green Arrow into left-leaning hero tackling big issues such as drug addiction during the 1970s. It’s no surprise that O’Neil would also try to reinvent the Man of Steel by stripping him of his weakness while simultaneously making him more vulnerable than he ever has before. He captures Superman’s character pretty well with his need to help people and the growing confidence and doubt he has throughout the story, though a couple of the changes to Superman’s outlook on life are a bit abrupt. It is also interesting to see his life as Clark Kent change as his day job becomes an on air special correspondent, reflecting the growth of the televised news cycle during that era. It causes him some more problems as he can no longer simply race away to change into his Superman outfit whenever there is trouble lest he reveal himself to a national audience. O’Neil has done a lot of good work bringing in real-world issues and events into his stories, but the drama with the Daily Planet takes a backseat later on in the story to focus on Superman’s problems. The story’s resolution also isn’t a very neat one as some elements get wrapped up quickly while others are left very open either due to other series following those beats or O’Neil leaving the Superman title. As his afterward in the book explains, the changes he implemented to Superman’s powers and life weren’t long-lasting as the next issues depicted Superman once again fully powered.

Kryptonite Nevermore is, of course, very much a comic of the 70s as O’Neil writes a lot of exposition that tells readers what they’re seeing and what’s going on throughout most of the panels. Through Superman’s thought bubbles, the omniscient narrator and dialogue the book is very word and exposition heavy compared to most modern comics. Most of the villains Superman faces are also traditional one-dimensional, moustache-twirling Saturday morning cartoon villains, providing little fodder for Superman to struggle against. Most of the tension and drama stems from how he deals with the new challenges he is dealing with as his powers fade and on that front O’Neil sells it pretty well. It is still a great glimpse into how 70s comics were written and developed as well as how O’Neil ultimately changed the comics medium as he strived to tell more mature and serialized stories with Kryptonite Nevermore being one of his earliest tales before getting his hands on Batman and Green Arrow.

When talking of Superman during the 60s, 70s and 80s, most commonly referred as the Silver Age of comics, it is impossible to talk of the Man of Steel without artist Curt Swan. Swan was responsible for many of the Superman visuals and character models that are still used to this day in a variety of media. His depiction of Superman throughout the book perfectly shows the physical and emotional struggle the hero suffers through. His facial expressions are detailed and his action scenes are pretty dynamic and animated for a comic from this period. A real sense of the scope for a fight is given as Superman tries his best to save everyone he can. Longtime fans will love the new presentation of Swan’s artwork while this collection offers a fresh introduction to one of Superman’s most significant artists.

In terms of additional content, Kryptonite Nevermore collects all of Neal Adams’ covers for this story as well as an introduction from former DC president Paul Levitz and, as mentioned, an fairly lengthy afterward from O’Neil on the creation and significance of the story. It is very interesting to hear directly from O’Neil why and how he came up with the story and worked alongside Swan and DC to craft it. All in all, through O’Neil’s story and Swan’s artwork, Superman: Kryptonite Nevermore is a very fine addition to the collections of Superman fans old and new.