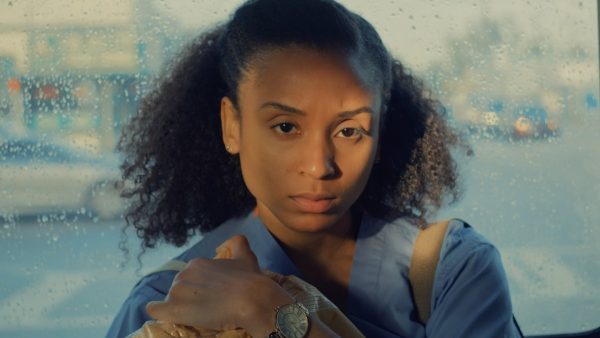 Ludi, a hardworking and exhausted nurse, battles coworkers, clients, and one impatient bus driver to learn her self-worth as she chases the American Dream in Miami’s Little Haiti neighbourhood. Edson Jean’s feature debut Ludi sees the filmmaker following the neorealist tradition – of exploring the everyday pursuits of the working class in light of an uncaring society – with quietly powerful gusto.

Ludi (Shein Mompremier) is a Haitian woman who moves to Miami’s historic Little Haiti neighborhood while working as a care nurse and hoping to capture a small slice of the American Dream for herself.

At the start of the story, Ludi presents an almost devout belief in the truth of the American Dream, her barometer for success represented by a dress she hopes to purchase for her niece back in Haiti. Just as the bicycle in De Sica’s Bicycle Thieves becomes a wider symbol of hope, here too the dress – though never actually seen on screen – is a physical embodiment of the dreams of Ludi and any other immigrant who has ever set foot on American soil.

But Ludi’s life is one filled with struggles; rents are high, and her care work never seems to pay enough, no matter that she’s fighting her co-workers for overtime and regularly putting in 60 hours per week. Company liability restrictions prevent her from working anything above that, so she’s faced with a dilemma, to disobey employee policy and moonlight as a private care worker.

“You need a man,” an outspoken, Trump-supporting Haitian bus driver tells her early on, but Ludi is fiercely committed to charting her own path free of accompaniments. Moreover, she’s so single-mindedly obsessed with prosperity at any cost that she doesn’t much have time for relationships – especially when her vacation days are wiped without notice and a colleague blackmails her after learning about her side-gig.

If Ludi’s story structure initially seems clearly defined, things change unexpectedly at the mid-point when she takes a private assignment to care for George (Alan Myles Heyman), a cantankerous elderly Jewish man who insists he doesn’t want her help. What follows is a terrifically crafted chamber piece set inside George’s apartment which comprises almost the entirety of the story’s second half. Despite flirtations with excess melodrama – particularly the means through which George attempts to get rid of Ludi – a bond is slowly forged between the two as each becomes more understanding of the other’s position. If some might be disappointed that the scale constricts so drastically for such a large chunk of the film, it’s a remarkable show-piece for the delicate scripting of Jean and Joshua Jean-Baptiste, and also the fiery two-hander between Mompremier and Heyman, even if it leads to a rather abrupt ending.

For the whole picture, Mompremier is exceptional, at once charmingly glowing and teeming with take-no-bullshit moxie; her clapbacks against anyone who dares cross her – more often than not men – are tremendously satisfying to behold. Heyman, who initially seems like a minor character but ends up appearing in basically half the movie, also deserves special commendation for rendering George in such believable terms – infuriating and sympathetic all at once.

Despite one slightly cartoonish supporting character – Ludi’s grating roommate Blanca (Madelin Marchant) – the entire cast lends flavour and context to Ludi’s struggle to basically enjoy her life. Through simple, unpretentious presentation and an efficient 80-minute runtime, we witness baby steps of character growth as Ludi realises the mapped-out path to “success” can so often disappoint – and that there are other roads to take.

Wrapped within the unique experiences of a Haitian-American woman – one played by a Haitian-American actress no less – and awash in music sung in Haitian Creole, Ludi drips with authenticity from its every pore, pointing a lens towards a corner of society most often ignored by cinema.