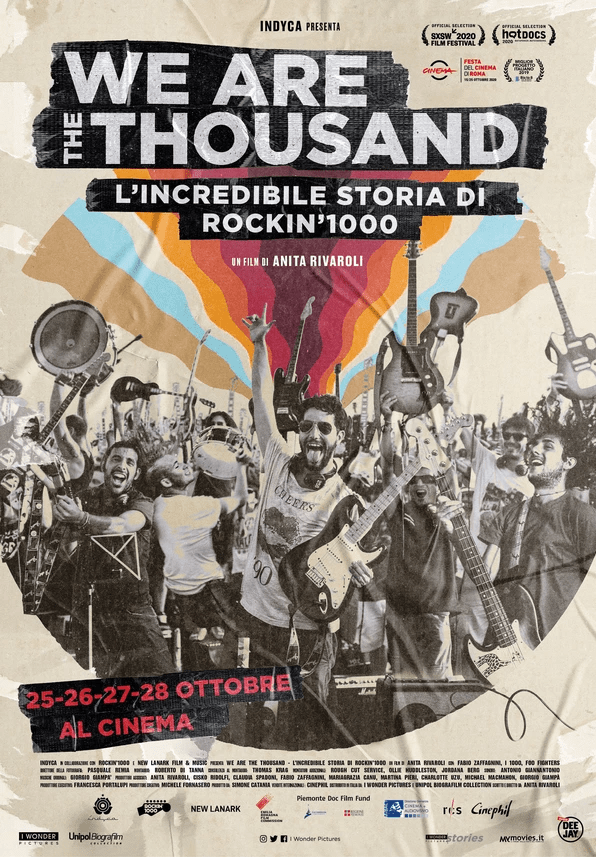 A thousand musicians gathered together with one mission – to get the Foo Fighters to perform in their small town. 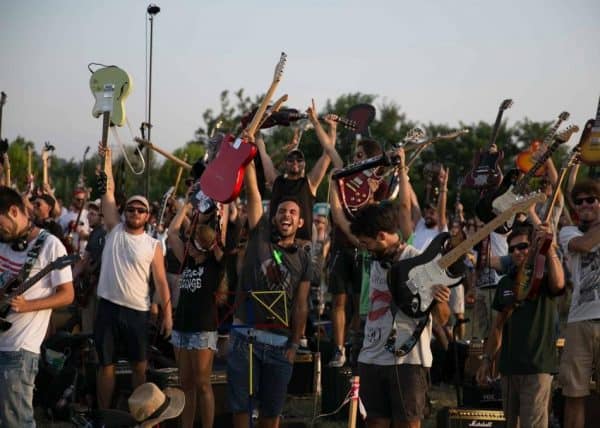 While there will certainly be more immediately “worthy” causes to get the documentary feature treatment in 2021, there’s also a lot to be said for films which portray the world waiting for us on the other side of this pandemic, where throngs of people can connect over their shared love of music.

Anita Rivaroli’s We Are the Thousand tells the heart-warming story of Fabio Zaffagnini, who started a campaign to gather 1,000 musicians – comprised of 250 singers, 350 guitarists, 250 drummers, and 150 bassists – in the small Italian village of Cesena to perform a rendition of the Foo Fighters’ rock classic “Learn to Fly” in glorious unison. The ultimate goal? To convince frontman Dave Grohl and his bandmates to visit Cesena and play a gig there.

Logistically the undertaking is obviously a nightmare, Fabio and his team of collaborators tasked with figuring out how to put the enterprise together. They began by posting video lessons for each part of the song online and then accepting submissions from the general public to join the band – but comparatively speaking, this was the easy part.

Even once the Rockin’ 1000, as they later began to call themselves, were selected, Fabio and company had to nail down the mind-boggling technical execution; namely, how does one keep so many musicians, especially drummers, synced up? 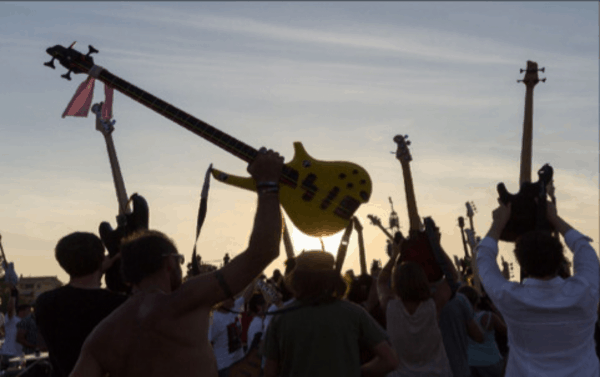 Rivaroli’s comprehensive coverage of the day makes it abundantly clear that the first rehearsal was, to be kind, an unsurprising clusterfuck, though thanks to clever implementation of visual cues for drummers to play along to, the second attempt achieved the beautiful synchronicity the project was seeking at the outset.

And then comes the final take, which was recorded and posted online for all to see. Whether you’ve seen it before or not, it’s a beautiful example of humanity coming together in the stead of a common goal, putting ego and individual expression aside in favour of the agreed-upon notes. If nothing else, observing the sea of people playing alongside one another, and the many spectators also looking on, will leave you desperate to be at a music festival once more.

Though Rivaroli trains her focus on the madness of that summer evening in 2015, she does also include talking heads interviews from many of the participants, who run the gamut from children to upper-middle-aged, of wildly different classes and backgrounds. It’s clear that, for many, the opportunity to be part of something so grand was enormously empowering, whether helping them to deal with mental health issues or, in the case of one subject, temporarily escape from a grim medical diagnosis. 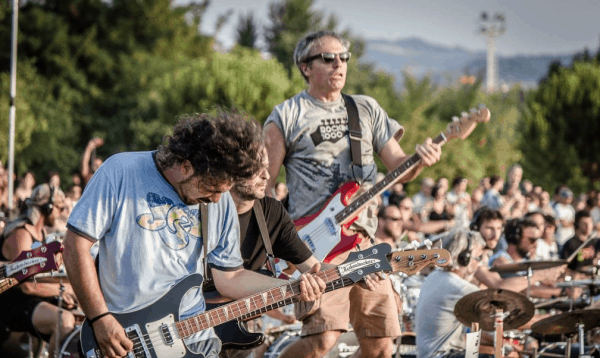 But that day is really just part of the story; the video was posted online and quickly went viral, soon catching the attention of Grohl, who indeed promised to play a gig in Cesena. And indeed, just three months later, in the middle of a European tour which he continued despite suffering a broken leg in the middle, Grohl and the Foo Fighters played a gig for the ages in the town, even inviting Fabio and other key members of the project onto the stage.

While this all could’ve simply been a neat experiment and cherished memory for all involved, the smoothness of that original performance left Fabio and others begging the question – why not do more? And so, the Rockin’ 1000 became a band in earnest, the natural evolution of which was an 18-song concert held for 15,000 people in Frankfurt, Germany. By the time the lights go down and the band begins the opening string section of The Verve’s “Bittersweet Symphony,” goosebumps are guaranteed.

At first I suspected that We Are the Thousand would tout the value and merit of a moderately interesting YouTube mini-doc – rather than a film-with-a-capital-F – but there’s a slow-creeping affect here which elevates it to be something quite profound. It would undeniably hit differently in another time, but circumstances as they are, it crystalises as a dew-eyed reminder of the primal connections with others we are all hard-wired to pursue.

While hardly the most Essential of docs you’re likely to see this year, We Are the Thousand succeeds as a good-humoured, slyly moving testament to the power of music. If you haven’t got a smile on your face by the end, are you even breathing?