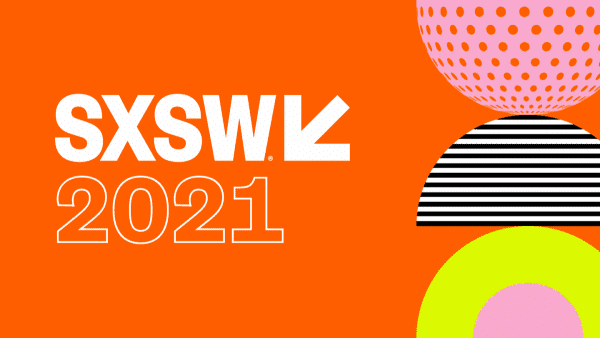 Explores the rise and fall of one of the biggest corporate flameouts and venture capitalist bubbles in recent years – the story of WeWork, and its hippie-messianic leader Adam Neumann. 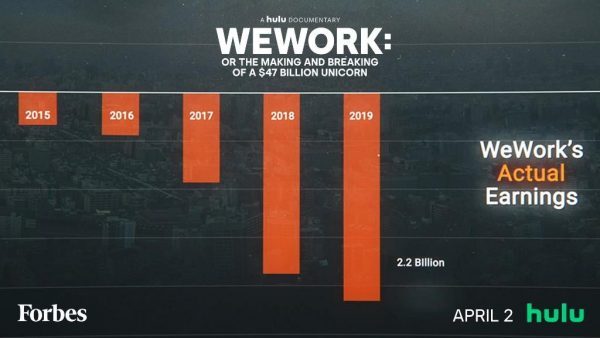 The latest documentary from Oscar-nominated filmmaker Jed Rothstein (Killing in the Name) opens with an illuminating and unforgettable quote from NYU business professor Scott Galloway – “If you tell a 30-year-old male he’s Jesus Christ, he’s inclined to believe you.”

Rothstein’s film – which premieres April 2nd on Hulu – chronicles the meteoric rise and cataclysmic fall of WeWork, a nebulous real estate/business space startup which tumbled from a valuation of $47 billion to just $10 billion within just six weeks in 2019.

At the core of its stratospheric “success” and historic collapse is co-founder Adam Neumann, a charmingly persuasive and bright-eyed salesman so effusively committed to creating his “capitalist commune” – that is, a series of hubs where tech workers can rent space and work on their own startups – that it’s little surprise so many were swept up in his thrall.

From the first minute of the film, where archive footage shows Neumann farting on camera in the middle of a shoot, it’s easy to see why his unconventional brand of irreverent leadership endeared him to so many, wrapped within a desire to smash the prevailing model of office culture.

WeWork couldn’t have risen up in a more opportune time, emerging shortly after 2008’s Great Recession, where techno-optimism was at an all-time high, if only in the hope that it might present a lifeline to those struggling in the wake of the economic downturn. Venture capital flourished, with investors frantically attempting to shuttle their money in the right direction and bet on the right “unicorn” – a company that will eventually be worth a billion dollars.

No subset of society was more thoroughly burned by the Recession than millennials, and WeWork represented a youth-driven rebellion against New York City business culture above all else, rejecting nepotism-driven deal-making and attempting instead to commodify space in a totally unique way. The idea of community was central to WeWork, where like-minded entrepreneurs could work side-by-side, pooling ideas and resources for their mutual benefit.

This eventually expanded from work into outright living, with their “WeLive” accomodation applying a similar model to apartments, and WeGrow, which attempted to reinvent education. Initially, it’s tough to doubt the sincerity of Neumann’s mission, even if it’s not clear exactly how he’s able to turn a profit from the venture; his desire to build a community at least seems nothing if not genuine. 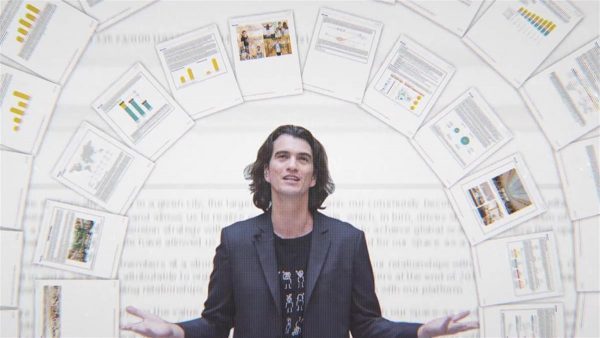 But as the film succinctly recounts, WeWork’s radical ideas ultimately gave rise to the more conventional ugliness of contemporary business; there are still greedy assholes at the top, a general, troubling lack of diversity, and a mission statement at odds with its leader’s own actions.

The bottom of WeWork eventually fell out amid its failed attempt to go public in 2019, whereby the company’s failure to turn a profit was flatly laid out to the world, alongside the revelation that Neumann himself had cashed-out $700 million of his own stock a short while prior.

As for how things were ever able to go this far, with so many seemingly smart and diligent people investing in the company? It is all about Adam, a man to whom comparisons of a cult leader are not unearned; he’s charismatic, energetic, and used his mission to attract both youthful optimists and lost souls to a cause which seemingly sought to reject the staid status quo.

No matter that he touted a “work hard, play hard” hustle culture, he won himself an army of cheerleaders thoroughly convinced his mission would succeed, because with so much big money backing him, how couldn’t it?

Though Rothstein’s film could certainly have dug deeper into what makes the man tick – his nomadic upbringing in Israel is only fleetingly touched upon – it succeeds as a fascinating, concerning examination of how superficially success can be presented to the world in the big business realm.

But Rothstein crucially doesn’t forget the wider human impact beyond the lost zeroes, that those who found purpose in Neumann’s mission – many of who are interviewed throughout – were once again left flailing when it shriveled. That he received a $1.7 billion payout while his employees were summarily laid off with as little as a month’s severance is surely the most damning indictment of how disingenuous his cause truly turned out to be.

If far from authoritative, this is still an engrossing takedown of late-stage capitalism and a terrifying testament to the power engendered by a cult of personality.