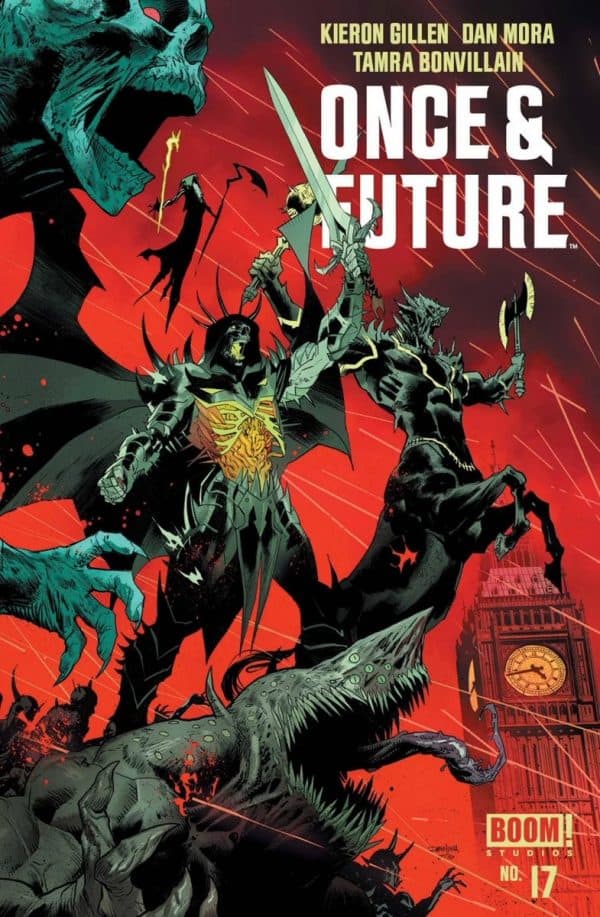 When the only option available to you is the darkness, do you take the plunge?

The events to date have brought us to a genuinely exciting place within this series. The latest issue of Once & Future has Duncan and Bridgette in a predicament – they are face to face with Lancelot while a “recovered” Galahad has turned up to rescue Niume/Mary from the Shadow Minister. While the final sentence in the last paragraph was a lot to get your head around, I swear it all does play out smoothly in the issue.

The story in this issue is possibly one of the strongest within the series to date, with plot development delivered through a chilling conversation between Nimue and Merlin. This conversation also hints at other potential story pitfalls our mythical heroes could have been caught up in, much like the end of Merlin.

The artwork has been cranked up to an 11 for this story arc, with the legendary knights looking like a Power Rangers/anime hybrid, yet not in an off putting way. The detail that goes in to show Duncan and Bridgette’s facial expressions help lend real emotion and personality to the characters, creating a stronger bond with the story.

A series that started off with a strange concept of reviving King Arthur to return modern England into its glorious historical roots turned out very different. In previous reviews I have been critical of the story’s second arc in which Beowulf and Grendel were the antagonists, which was a low point for the overall series. This third arc has now put the mysterious character of Merlin in the role of puppet master, looking like he has been behind the entire scheme since day one.

This issue genuinely left me sad come the final page, as the story was incredibly engrossing while managing to throw in some comic relief. The tension now mounts as the race for the Grail is in motion. I am keeping an eye out very closely for the next issue and this series has now become my latest obsession.