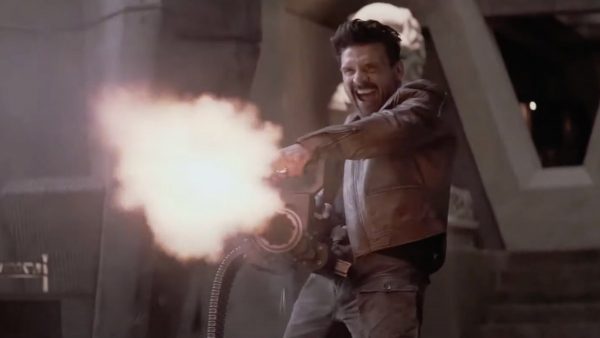 Boss Level  is an action-packed genre mash up starring Frank Grillo. Caught up in a time loop which sees his character Roy Pulver repeat the same day over and over again, this high concept Groundhog Day homage is slick and stylish from the first frame.

Displaying an easy charm and action hero chops, Frank Grillo stands toe to toe with co-star Mel Gibson to deliver something truly unique on screen. A role which also encompassed that of producer alongside writer-director Joe Carnahan, ushering Boss Level into the world through their WarParty production company.

Recently both men took time out to talk about Boss Level with Martin Carr, expanding on their involvement and what audiences can expect from the film. Check out the interview here…

Trapped in a time loop that constantly repeats the day of his murder, former special forces agent Roy Pulver (Frank Grillo) uncovers clues about a secret government project that could unlock the mystery behind his untimely death. In a race against the clock, Pulver must hunt down Colonel Ventor (Mel Gibson), the powerful head of the government program, while outrunning skilled ruthless assassins determined to keep him from the truth in order to break out of the loop, save his ex-wife (Naomi Watts) and live once again for tomorrow.