Part two of our interview with producer Jonathan Sothcott who joins us to discuss Nemesis, Shogun Films and more (read part one here)… 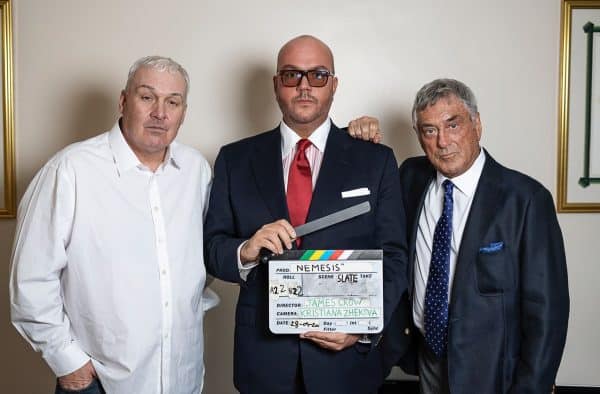 Shogun Films, your latest venture is making waves. How did this come about and what are your goals for the company?

Well going back to the end of 2019 I was at this cross roads – if my heart isn’t in it, do I keep doing these films? Ultimately the ‘yes’ came from my wife, who is my greatest advocate and really, really believes in me. She’d never really seen my ‘glory’ days as a prolific film producer and she gave me some great Rocky style pep talks. She also sometimes unwittingly helped me to weed out the toxic people from my life. It’s very easy to attract hangers on in the film game and they are just a relentlessly negative vicious cycle. I guess if you start the party people want to come. It always amuses me how many people out there are ‘film producers’ but have never made a film at all, let alone a good one. It isn’t easy at the best of times but in Britain there’s so much bullshit and politics that goes with it.

There were, however, some good people around me. I’ve worked with Adam Stephen Kelly for many years, he’s a great pal and very talented. Also my regular composer Rob Hughes. They, along with Jeanine were my kind of core team. And of course Billy Murray. So we decided over Christmas that we’d start the new decade with a brand new film company and do things differently – we’d only make good films with good people. We’d try to recapture a bit of that video shop magic and we’d build something special. I wanted a fresh start and to do everything differently, doing it the right way. I brought in my friend Danny Bear who is a very successful entrepreneur to look at the sort of ‘bigger picture’ side and he in turn brought in another chap he works closely with, Andrew Green. Then I had the great fortune of having American filmmaker Daniel Zirilli come into my life, having read the first interview I did about Shogun.

Zirilli changed my life and has certainly given Shogun an edge in terms of UK production companies because he brings this amazing commercially savvy international perspective. He’s a great guy and a key part of the Shogun plan moving forward. Even though we’re on different continents we’re in touch every day and constantly working on our slate. Our goal is simple – to become the best independent producer of action, crime and thriller movies in the world. We want to work with the best filmmakers, actors and distributors to give audiences the genre films that they love and the ones they deserve. I know how easy it is to be lazy and not to care and to make a bad film. And how hard it is to make a good one. But rest assured I am very much fired up, at the top of my game and ready for Shogun to shake things up and become a real disruptor.

Ultimately I want people to see that Shogun logo and get that warm feeling that they’re about to enjoy a quality genre film, just like I always would with Cannon or Carolco back in the day. Shogun is the new old fashioned and I’m more excited with what we have lined up than I’ve ever been in my life.

One thing that impresses me is the multimedia approach to Nemesis. There’s the film but you’ve also got a book, a soundtrack release and an official song too. Was this always a plan, and do you see this becoming a Shogun regularity?

Yes it was and yes absolutely. In the past I had done tie-in novelisations of Vendetta, We Still Kill The Old Way and Age of Kill and CD soundtracks of the We Still Kill movies but this is a much sleeker, more focussed brand we are building with Shogun books and records. Robert and Chris wrote an amazing score – the best in any of my movies and it absolutely had to be put on a CD. I’m a big advocate of physical media – I still buy blu rays and was disappointed Nemesis won’t be released on that format (but obviously appreciate the commercial realities) and we want to make Shogun into a sort of unofficial club for the people who like our films, give them that little bit something extra. We treasure our audience. I’m also pleased there are a couple of extras on the DVD – a 25 minute ‘making of’ programme and two deleted scenes.

You’ve worked with a number of icons over the years, and Nemesis marks another collaboration with Billy Murray. How is it working with Billy?

It isn’t work with Billy, it’s fun. He’s part of my family. We’ve been friends for nearly 15 years and had so many crazy adventures together getting into all kinds of scrapes. We’ve been around the world together, met everyone from Danny DeVito to Mikhail Gorbachev together. Its an unusual friendship as there’s a four decade age gap and on paper we have nothing in common but we just love each other and have a shared sense of humour. Billy is a hero to me – I grew up watching him in The Bill and Eastenders and there’s no doubt he was one of the best actors of his generation. He’s a real alpha male on and off screen and he has all the attributes to be a star – he’s incredibly handsome, he is a brilliant actor, he has a wonderful rich voice – he’s the real deal. We’ve made a number of films together with mixed results but I feel that with Nemesis I’ve finally made a movie worthy of his talents. I’m honoured to have made a good movie for him and if it goes some tiny way to repaying the faith he’s always had in me then that’s great. Billy was one of the 6 people at my (covid-safe) wedding which tells you all you need to know about our unbreakable bond. One of the things I miss most during this lockdown are our culinary adventures in East London terrorising his local Italian and Indian restaurants and drinking far too much red wine and brandy. I remember doing a table read for a film called Devil’s Playground years ago and most of the actors were unknown actor friends helping us out. Then Billy walked in, larger than life and twice as famous. As Bart, the film’s producer, introduced everyone around the table he simply said “and Billy Murray. Living Legend” and I think that sums Bill up as well as anything else.

There are some great performances in Nemesis, including Nick Moran on top of his game and Billy. The big names do what their CV suggests, but the less established cast members and newcomers also delivered. How pleased are you with the final outcome?

I’m exceptionally pleased with the cast. My intention from the outset was to avoid any of those weak supporting performances that characteristically let these films down. And I think we succeeded. I tried to get the very best actors I possibly could. Rebecca Ferdinando and Johnny Palmieros are terrific actors in their own right very kindly came and did superb supporting turns for us. I was also thrilled to work with Rupert Holliday-Evans who has been on my list to grab for a film for many years. I think Danny Bear acquitted himself admirably for his first performance, he is naturally charismatic and has a distinctive look. Ambra Moore is a very natural, nuanced actress and I really like her subtle performance. Very understated.

There’s no other way to say it other than that I’m absolutely in love with my wife, Jeanine’s performance in the film. The role was written for her and there’s certainly a lot of her in Sadie because I really admire that she came to acting later in life (in her 40s) and slogged her way through dozens of short films and endless parochial theatre to earn her spurs but nobody writes roles for women her age in my kind of films. If I’d had a shred of doubt that she could hold her own with Nick and Billy and all those other established names, I wouldn’t have cast her. Egg on face is not a look I do well. She’s a terrific, strong actress and she really does give an exceptional performance. It could be hard producing and writing a film where your wife is one of the leads as she sort of has a foot in both camps but not Jeanine – she’s an integral part of Shogun and whenever she wasn’t acting she was sorting things out on set, dealing with problems, the lot. I can honestly say I married my favourite actress! One of the great things about working with Jeanine is that she doesn’t want to be in everything. She’s not looking for fame – she’s dedicated to her craft and doesn’t just want to be in any old film. She’s the most remarkable woman I’ve ever met and It’s no wonder I’m so inspired right now. 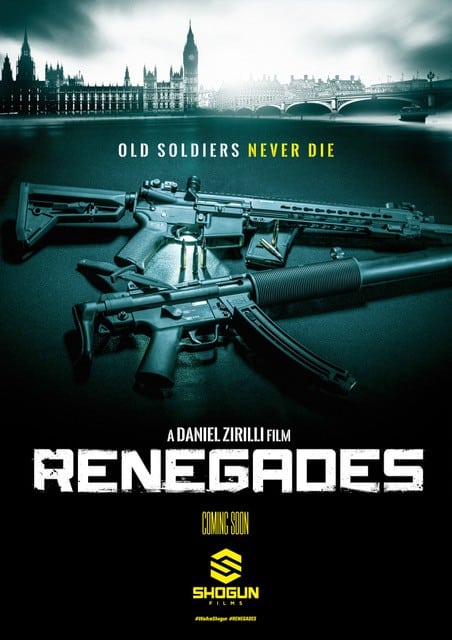 There’s an exciting slate on the horizon for Shogun. There’s an eye-catching cast in Renegades for one. Can we expect more star powered vehicles? You’ve also struck up a creative partnership with prolific action specialist Daniel Zirilli. What does he bring to the table?

Daniel is one of the shrewdest, most switched on filmmakers I have ever encountered. He has directed some great commercial movies with legends like Seagal and Lundgren but he also thinks like a producer. I hope that what will characterise our films together is that he won’t feel he has to be the producer and I won’t feel I have to be the director. It’s a dynamite combination. Renegades has an amazing cast and an amazing script and I can’t wait to get stuck in. We’ve put together a tremendous cast of much-loved faces including the mighty Lee Majors, Danny Trejo, Ian Ogilvy, Billy Murray, Michael Pare and more. It’s a terrific vigilante romp about a group of special forces vets who take revenge after one of their friends is murdered. The Wild Geese meets Harry Brown.

On a completely different note is Knifer, based on the best-selling novel by Ronnie Thompson (aka Dave Beton) which is going to be a more serious film, a drama about a young offender’s journey through prison. It’s a beautiful piece of writing and its an important film to make. Sometimes you just have to sell a story. Michael Caine always used to say he did two for the money and one for him. Knifer is one for me.

We’ll continue to do these smaller British films like Nemesis and Knifer because they’re important and we don’t want to neglect our British audience. We’re developing a terrific witness protection thriller called Eyewitness and a London cop movie called Crossfire but our main focus going forward will be those international action movies that Daniel has been making. I want Shogun to be a home for the Scott Adkins and the Michael Jai Whites. I want to make films with all the action stars we grew up watching. The sky really is the limit.

Do you have any advice for aspiring film-makers looking to make headway in the industry?

Yes – give up now, its too hard! I think the most important piece of advice I can give is – if you want commercial rather than critical success – make films an audience wants to see, not films you do. There’s a big difference and I hate the antipathy with which may crowd-pleasers are made.

Many thanks to Jonathan for taking the time to speak to Flickering Myth.

Nemesis is out on DVD and VOD in the UK on March 29th.