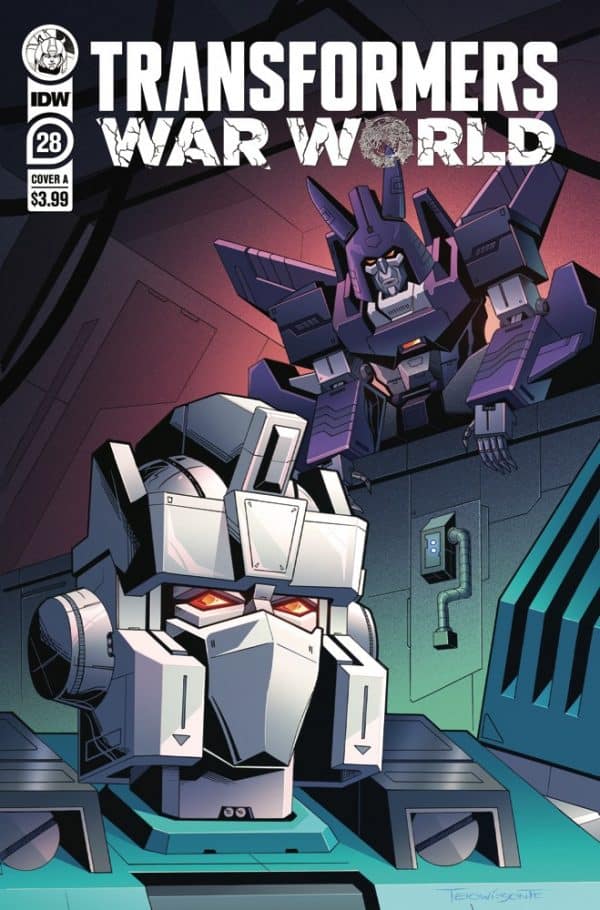 After a little over a month long delay, IDW’s main Transformers series returns with a focus on many of the supporting characters in both the Autobot and Decepticon factions as well as a few neutral bots, including one particular bot scheming as usual against both sides. Brian Ruckley writes a compelling issue that pushes the story forward in some very interesting areas as characters come together in unexpected ways while the artwork from Anna Malkova and David Garcia Cruz is as detailed as always.

Rather than focus on the big players like Optimus Prime and Megatron, Ruckley instead utilizes several of the supporting characters like Cyclonus, Swindle and a few others. Interestingly, these bots haven’t yet chosen a clear side in the conflict as Cyclonus is a bit of a wild card more motivated by settling his grievances against bots who have wronged him whether they’re Autobot or Decepticon and Swindle is just serving his own opportunism in the crisis, helping those who can help him. In an era of Cybertron where the factions aren’t as cut and dry as they usually are in other Transformers media, Ruckley is painting a pretty intriguing picture as to how these characters choose their side.

Nowhere is that more interesting than Starscream’s scene as he is being filled in on the latest events by one of his informants. The fact he actually planned for his beating from Megatron and Soundwave in the previous issue, allowing them to think they had taken Starscream’s information by force rather than by invitation, shows how much more of a schemer and a manipulator he is than most of his incarnations. While some Cybertronians are throwing themselves in one lot or the other or are in a state of confusion with Megatron’s propaganda, Starscream is content to merely let events play out with just a touch of his involvement as he’s more curious to see what Megatron does with the information and how the Autobots will counter it. Starscream’s ability to play both sides and his patience to see which one comes out on top before fully backing them is an aspect to the character Ruckley has done great work on.

Anna Malkova once again makes a very visually exciting issue. The fight between Cyclonus and Sixshot is illustrated well, showing both Sixshot’s danger with his size and many transformations and Cyclonus’ skill the issue’s standout sequence. Of particular note is how she uses the nine-panel grid with Cyclonus as he talks to his dead friend, displaying the emotional changes on his face with much detail from every frown or downcast eye. David Garcia Cruz’s colours are vibrant and pop off the page. Like Malkova’s work, his colours in the Cyclonus/Sixshot fight is great, but another visually appealing sequence from him is Swindfle’s escape from jail with his atmospheric lights and darks as his cell is blown and he makes his way down the hall of other prisoners. Their combined artwork makes Transformers #28 a very nice issue to look at.

Ruckley’s focus on the supporting characters of the series works very well to push them in more interesting directions as well as tease how the two warring factions become what they are usually depicted as. The artwork from Malkova and Cruz is great and emphasizes the character work the series is employing. With the Cybertronian war ramping up, Transformers is not losing any steam on either its story, art or character fronts.