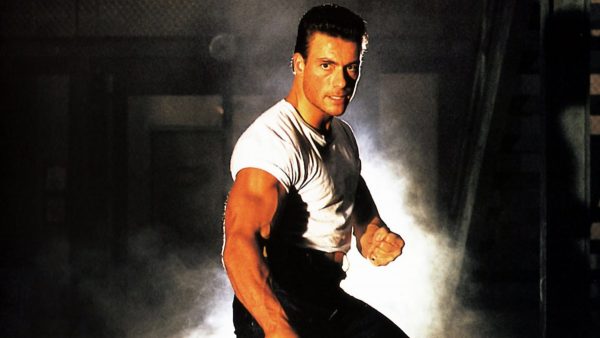 The muscles from Brussels, Mr Jean-Claude Van Damme has travelled through time, cheated death and been reanimated, fought in underground fighting tournaments, been a legionnaire (twice), and he’s even got caught up playing himself in a botched post office heist (JCVD) and as an international spy in short lived Amazon show, Jean-Claude Van Johnson. He’s done his yards as a high kicking action man and he’s also spent two films in the nick. The big house, the pen, the joint, the clink, etc. One film was an early career venture away from his tried and tested formula (and his final venture with Cannon), whilst the other marked a third and final collaboration with Ringo Lam in the earlier years of Van Damme’s straight to video status.

So let’s take a look back at Van Damme’s time in porridge, the bird, the cooler… you get the idea… 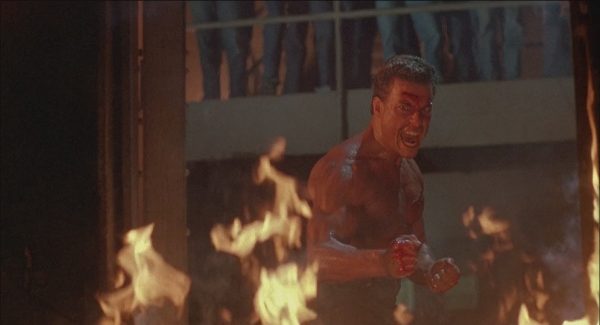 What’s important to note here, is that Van Damme isn’t a criminal. Here he plays a cop, fresh from putting an end to a serial killer’s reign of terror. He stops ‘the Sandman’ (played with sadistic verve by Patrick Kilpatrick) and then his next assignment sees him placed undercover in a prison where inmates are dying mysteriously. As it happens, said prison has a sideline in selling organs. Death Warrant, began as a Cannon picture but came right near the point of their collapse. MGM took over and delivered this Van Damme starrer that retained all the inconsistent shabbiness you’d probably expect from Cannon. It strips away any grounding in reality, with a depiction of prison that’s pure fantasy, right down to the head crims ability to have carte blanche on the décor of an entire wing (not too mention a lot of organ harvesting going on without any repercussions…until JC shows up of course). So it’s ridiculous and it’s daft, but like many of Cannon’s works, all the better for it.

By this point in his career, Van Damme had marked his card as a balletic kicking Kumite specialist. Aside from venturing into a post-apocalyptic wasteland with Albert Pyun’s Cyborg (also Cannon), JC was more about mano-a-mano bouts in underground fight circuits. Death Warrant marked a step away from that but still retained Van Damme’s penchant for high kicks, and has a finale throw-down between Van Damme and his nemesis. The film is kind of a Van Damme afterthought. In a strange way the prison setting is a benefit and a curse. It was new for him, and it’s been a much used trope to have a prison set action film. At the same time it can be limiting, and this is where you see flights of production design fancy in creating the big criminal kingpin of the joint’s (who becomes an ally to JC) eye catching harem of transvestites. Additionally there’s distinct blues and ambers in the lighting and colour scheme that don’t go for reality as much as a hyper-reality. It’s eye catching though, and makes the film more interesting to look at (but you still feel that visual claustrophobia), whilst there’s a real amplification of the hellish areas of the prison, particularly when Van Damme is reintroduced to his old foe, The Sandman.

Van Damme would kick away from the Kumite far more effectively in the likes of Double Impact, Universal Soldier, Timecop et al but Death Warrant remains wholly watchable, even if the star turn himself seems a little misplaced in what might have suited a Charlie Bronson vehicle. 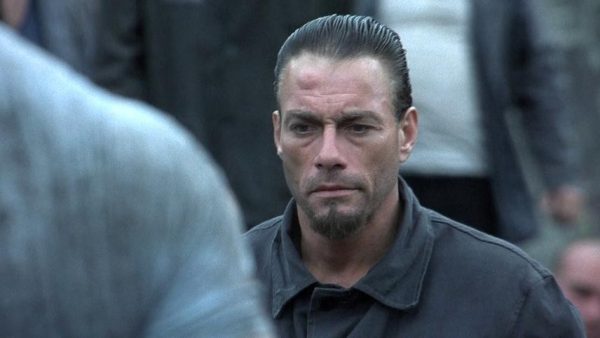 What if Shawshank Redemption was reimagined as a Van Damme vehicle? Quite the concept. Imagine no more, because it happened in 2003. At this point in time Van Damme had set his stall in video land and his time as a theatrical leading man had passed. Try as he might with attempts to shift into more character driven fare, with this, Wake of Death and Until Death, the films were still driven by formula, and though they afforded Van Damme the chance to show he could play grittier characters, they were just a little too rote or inconsistent to find a different audience, and didn’t adhere to his bread and butter style enough to fully satisfy his die hard fans who might have preferred a retreat to the Kumite. Van Damme’s video days seemed to be a distinct move away from the theatricality of his balletic, high kicking fight scenes, often opting for a more grounded style. In fact having seemingly retired the helicopter kick in 2001’s The Order, it wouldn’t return until The Expendables 2 where nostalgia was the order of the day. It had got to a point too, fans began doubting whether he could pull those moves off in his 40’s/50’s. He still kicked with regularity, but without milking it too much.

So In Hell opted for a little more dramatic weight in the beginnings of the ‘morose Van Damme’ period. Perhaps a period that lasted too long (it’s still going) and with debatable results. This however, benefits from having Ringo Lam at the helm. It’s not his best work, even with JCVD, but he offers enough of a deft touch and ability to extract some strong moments from Van Damme, to give this film plenty of merits. It kind of aims higher dramatically, and philosophically than it actually achieves, jarring with some corny prison tropes along the way, but for the most part is kept watchable. Lawrence Taylor as a kind of melding of a psycho-serial killer, with a poetic outlook more akin to Michael Clark-Duncan in The Green Mile, feels like an addition that never quite lands. 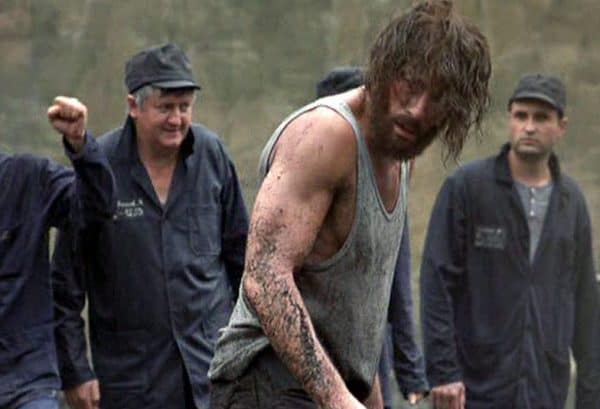 Interestingly though, that Kumite element does partly return in the prison where fighting tournaments are run and Van Damme is reluctantly thrown into  them and reawakens his will to survive. This Nu Image vehicle isn’t entirely unlike their successful run of Undisputed sequels, but far less fanciful and not nearly as popular, but with Lam’s action direction there’s a real down and dirty, blood and mud approach to the fight sequences. They’re excellent. A total antitheses to what we saw in Death Warrant era Van Damme. Was it what fans wanted? Maybe not though. In Hell is certainly very watchable though and a finer example of Van Damme’s DTV output.

What are your thoughts on Death Warrant and In Hell? Let us know on our social channels @flickeringmyth…

Tom Jolliffe is an award winning screenwriter and passionate cinephile. He has a number of films out on DVD/VOD around the world and several releases due out in 2021/2022, including, Renegades (Lee Majors, Danny Trejo, Michael Pare, Tiny Lister, Ian Ogilvy, Patsy Kensit and Billy Murray), Crackdown, When Darkness Falls and War of The Worlds: The Attack (Vincent Regan). Find more info at the best personal site you’ll ever see…https://www.instagram.com/jolliffeproductions/