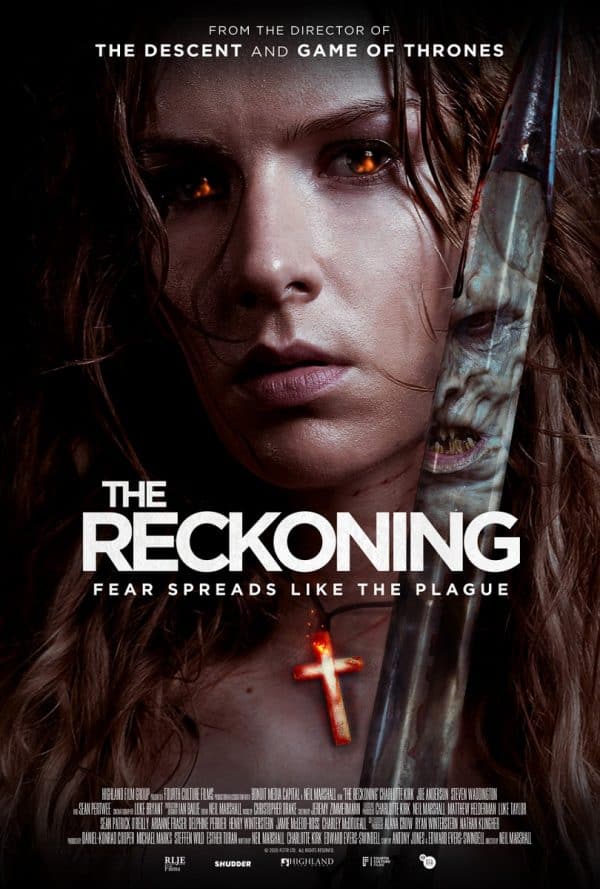 A young widow in the middle ages is accused of being a witch after her husband dies of the plague.

The Reckoning is what happens when a genre filmmaker with a couple of certified horror hits under his belt returns from the lofty heights of making a huge blockbuster superhero movie that was universally recognised as a cinematic turd, although to be fair to Neil Marshall it was studio interference that neutered his Hellboy reboot (and the fact that it wasn’t a third film directed by Guillermo del Toro which, again, wasn’t really his fault).

And so Neil Marshall returned to the well and came up The Reckoning, a return to his horror roots and a vehicle for actress/co-writer and Marshall’s real-life significant other Charlotte Kirk. But given how beloved his previous movies The Descent and Dog Soldiers are in genre circles, and also what the failure of Hellboy did for his reputation, what does The Reckoning need to do to help put things right and give the director a hit?

Well, quite a lot actually and, if we’re being honest, The Reckoning may not be the movie to do it. However, despite its flaws – and there are many – The Reckoning is still a pretty good movie if you approach it in the right way, that is if you don’t go into it expecting a mainstream crowd-pleaser like The Descent because, like it or not, Neil Marshall has moved on from that movie and his recent experiences in directing TV shows like Game of Thrones and Hannibal have clearly influenced him and his directing style.

Grace Haverstock (Kirk) is a young widow whose husband killed himself after he caught the plague by drinking out of the tankard of an infected man. Unable to pay her rent to local Squire Pendleton (Steve Waddington – Sleepy Hollow) and refusing his brutal advances to pay in other ways she is cast out as a witch, with Pendleton bringing in notorious witchfinder John Moorcroft (Sean Pertwee – Dog Soldiers) to extract a confession. However, Grace is not going to give in to Moorcroft and Pendleton’s torture, even when the devil himself comes calling…

To say this movie was influenced by Witchfinder General would be something of an understatement; even Sean Pertwee cannot help veering towards campy Vincent Price territory on occasion, although it must be difficult to resist when he’s basically playing the same character as Price did. But The Reckoning, despite its historical setting and nods to Vincent Price, Hammer Films and classic horror, is very much a contemporary piece, aligning Grace’s victimisation by the society around her with Charlotte Kirk’s own personal dramas and, in a way, that is where The Reckoning will draw the most criticism as Kirk plays Grace as if she has just put on some peasant clothing and BANG! – she’s there; not too sure that medieval peasant women had their hair and make-up done quite so perfectly, so much so that takes away from the authentic set designs and dialogue that carry the film.

Charlotte Kirk also plays Grace very seriously, as she should because it is a serious story with very few laughs in it, but contrasted with Sean Pertwee’s arch performance and the fantastical elements that creep in during the final third it feels very jarring. One could argue that Witchfinder General was also fairly humourless but Vincent Price was playing down the campier aspects of his movie persona whereas Pertwee, and to a lesser extent Steve Waddington, are playing it up, creating a stylistic divide where Price was bringing the camp and the terror together.

But, as previously stated, if you go into The Reckoning knowing that you are not going to get an entirely true and authentic representation of medieval England but a version of it that feels oddly contemporary (pretty sure they didn’t have neon green lighting then either) then you are going to enjoy it a whole lot more. Of course, there is also the sex and violence that comes with depicting less enlightened times but the sex is about as rural medieval England in representation as an episode of Star Trek, although the movie isn’t afraid to dish out the gore when required, such as one unfortunate soul who gets his head mashed by a runaway horse and cart in one of the movie’s visual highlights.

As you can probably work out there are a lot of things to nitpick with The Reckoning, little lapses in consistency, pacing – 111 minutes is way too long for what is a very bare-bones story – or authenticity that could potentially derail a movie such as this but Neil Marshall somehow makes it all work to create a horror movie that is, at the very least, a watchable mess and, at most, a grim but well-shot and wonderful looking genre piece with a bewitching atmosphere and a final act that lets it go the way of all the best Hammer movies by ending with a fire and people running wild like headless chickens amidst a lot of carnage. It may seem odd to praise a movie as messy as The Reckoning is in places but despite all of its faults it does somehow scratch that particular itch for an occult horror movie that delivers in the old-school way, i.e. with a little more violence and not quite so much pretentious brooding.