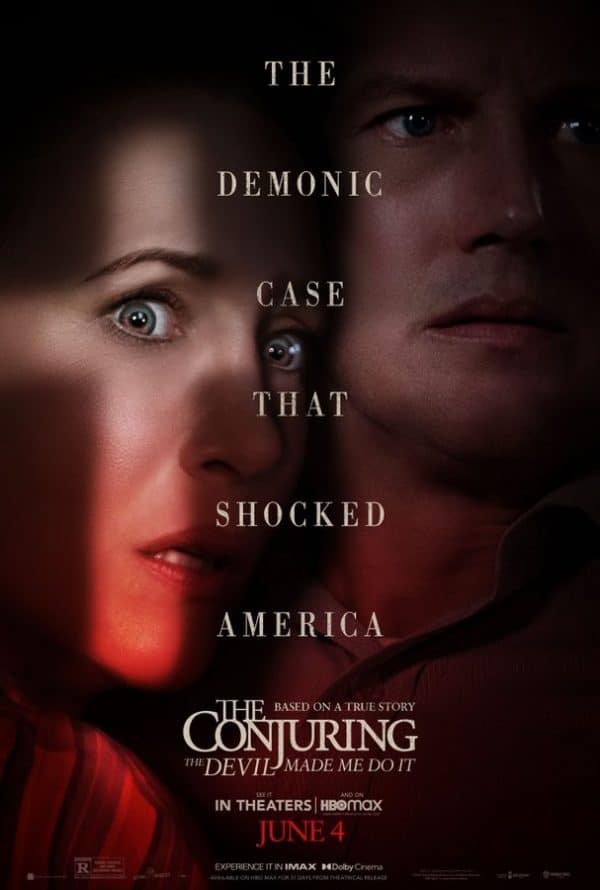 Paranormal investigators Ed and Lorraine Warren try to uncover the truth behind a murderer’s claim of demonic possession. 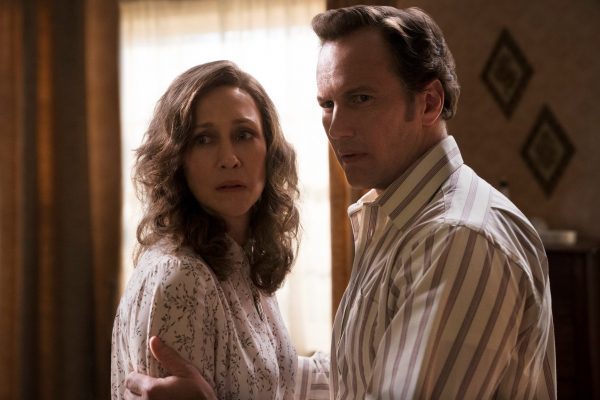 Believe it or not, The Conjuring: The Devil Made Me Do It is the eighth entry into the so-called Conjuring Universe, though few could be blamed for forgetting most every interstitial release between the main Conjuring movies.

It’s been an entire five years since James Wan last lent his directorial hand to the series with The Conjuring 2, and though the filmmaker continues to produce each new spin-off and occasionally does enough to earn a “story by” credit, every project since he departed the director’s chair – the two Annabelle sequels, The Nun, and The Curse of La Llorona – has proven more workmanlike than inspired.

Wan also opted not to return for this sequel due to apparent scheduling conflicts, and that absence is unfortunately palpably felt throughout the end product, which while benefitting from tight production values and the still-alluring pairing of Vera Farmiga and Patrick Wilson, patently lacks the special sauce of Wan’s filmmaking vision.

The Devil Made Me Do It takes place in 1981 Connecticut, with Ed and Lorraine Warren (Wilson and Farmiga) being called to investigate the case of Arne Cheyenne Johnson (Ruairi O’Connor), a young man charged with the brutal stabbing murder of an acquaintance, and who claims it was the result of being demonically possessed.

The shift away from the haunted house formula of the first two Conjuring movies seems like a smart idea on paper, but after a shamelessly Exorcist-inspired pre-title sequence the film settles into a frustratingly comfortable, even complacent mood, and never gets anywhere close to the modest peak of its opening set-piece again.

The most apparent problem with the film is indeed the void left by Wan’s departure; he’s been replaced here by Michael Chaves, who previously helmed the franchise’s aggressively pedestrian The Curse of La Llorona. And while Chaves certainly proves himself capable of conjuring (sorry) appealing images, his attempts to craft sequences of sustained suspense end up feeling like desperately ersatz Wan at best.

The patience and ingenuity of Wan’s more memorable set-pieces are nowhere to be found here, the delineated spook-scenes proving too reliant on metronomically predictable jump scares and too often slipping into unintentional goofiness – particularly a laughably schlocky sequence set on a cliff edge.

But equally frustrating is the script Chaves is working from; writer David Leslie Johnson-McGoldrick gets a sole screenwriting credit after working with three other writers on the second Conjuring, and on the evidence presented here he likely wasn’t the one responsible for that film’s uncommonly trenchant devotion to its characters.

If both prior Conjuring films invested us in the poor victims of the supernatural hooey and the Warrens themselves, both are under-served this time around. We spend surprisingly little time with accused murderer Arne throughout the film and gain little insight into his interior life, while though Vera Farmiga and Patrick Wilson are reliably terrific as the Warrens, they’re mostly left to their own devices to merely go through the script’s formulaic motions.

What passes for character development here amounts to having Ed suffer a heart attack in the film’s opening exorcism sequence, ensuring he’s thoroughly gassed for the rest of the movie any time he has to so much as leave his chair. All it does is neuter a character who audiences would rather not see working at limited capacity, especially given that it’s been five whole years since we’ve seen him. Thankfully Farmiga and Wilson are so great as these characters that their full-hearted relationship retains an emotionally persuasive throughline.

It’s just as well, because the Warrens’ status as real-life charlatans have never felt more transparent, as they attempt to convince the American legal system that demons in fact exist. It’s a risible premise and the film smartly doesn’t spend too much time hanging out in courtrooms – though in an inspired moment, the Warrens convincing Arne’s lawyer of the existence of the supernatural through one undeniably hilarious match cut. 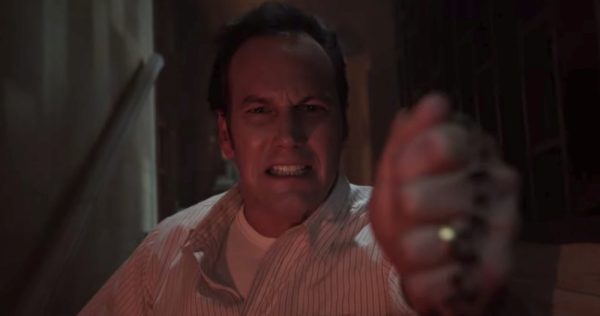 But considering that this film is based (very loosely) on real events where a human being was actually killed, and reconfigures that truth through an excusatory supernatural lens, there’s an unmistakable air of ick to the Warrens’ characterisation compared to the two prior films. It won’t be a deal-breaker for most audiences, but it fundamentally changes the tone compared to its predecessors, which functioned as more harmlessly speculative, inspired-by-“true”-events ghost stories.

It’s again easy to appreciate the desire to switch-up the well-trod haunted house format, but it’s largely been replaced with a generic round of paranormal breadcrumb following, tangling itself up in subplots and backstories which reach a critical mass of tedium in the film’s noisy yet oddly joyless funhouse of a third act.

In the two prior Conjuring films, Wan took superficially conventional setups and elevated them with his epic sense of scale, ingenious ear and eye for aesthetics-informed mood, and intimate character portraits. By comparison, The Devil Made Me Do It feels rote and dispassionate, lacking even the basic memorable thrills of the instantly iconic mascot-type monsters introduced in the prior Wan joints.

James Wan’s creative, character-driven craftsmanship is sorely missed in this watchable threequel, which is near-paradoxically the dullest and the silliest of the Conjuring trilogy.