Tom Jolliffe looks back at Superman III, the maligned third outing for Christopher Reeve as Superman… 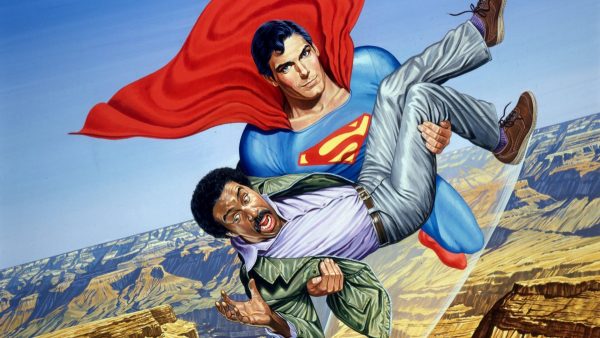 As we await the long gestating Snyder Cut of Justice League, and having had a (at best) very mixed bag of Superman depictions since Christopher Reeve’s breakout, I thought I’d take a look back at one sequel in his initial run that has been greeted with a mixed response over the years. In more recent times it’s gained in cult appeal, but back in the 80’s, its saving grace tended to be the fact that it wasn’t as bad as Superman IV: The Quest for Peace, which came out four years after.

First though, lets consider the legacy of Reeve in the role. For many, myself included, he’s still the definitive Superman. Whilst arguments about who the best Bond is can be more divisive, there’s generally a consensus that no one did the Man of Steel quite as well as Reeve. In part because Brandon Routh starred in a pale imitation of the Richard Donner instalments in Superman Returns, whilst Zack Snyder’s films are atypically divisive, portraying Superman (as played by Henry Cavill) as kind of dour and charmless. Under Dick Donner, Reeve shone brightest, that’s for sure. In part because Donner provided the kind of directorial prowess, and was backed by the kind of finance that the latter sequels didn’t quite have. Indeed, Donner made Superman movies in the peak of his powers, whilst the sequels went to more long standing directorial stalwarts like Richard Lester and Sidney Furie, both of whom were kind of on a downward trajectory (and again, Furie in particular wasn’t given much money to play with). So Superman III eventually came. With sequels becoming more of an expectation during 80’s blockbuster cinema, it was inevitable. Comic book films weren’t generally big, or hugely popular (though gained traction on TV, notably with the Bill Bixby/Lou Ferrigno Incredible Hulk series, or the earlier run of West/Ward in Batman). Superman III, like its predecessors, had a hefty budget (but significantly less sizeable than the previous). It was tentpole. There was a clear attempt to lighten the tone somewhat too. Not that Superman was inherently dark under the gaze of Donner, but certainly, it had a certain grounding along with a lot of great humour (Superman: The Movie may still be THE comic book film for me, and it’s less focused on the spectacle than future comic films would tend to be).

Superman III set its stall out quickly though. It was more comical, more comic book, and at the same time, logic flies out the window (perhaps under the misapprehension that logic isn’t necessarily required in a glorified B picture about a man who can fly). Kids were being dazzled by brighter, more colourful films, with perhaps lower brow humour. Lester in fact had been brought on board after Donner left the second film, and his impact on that film saw a noticeable shift in style and tone through the picture. The second film is intermittently brilliant, particularly with its trio of villains, and not all of Lester’s impact is without merit, but there was a certain inconsistency that stopped it being as iconic as the first. Many think Superman III is kind of terrible. It’s certainly an oddity, but within its albeit cheesy story, there are plenty of charms. Clark revisits Smallville, which has some interest (attracting the attention of Lana Lang). Margot Kidder’s Lois is more of an extended cameo in this. Then the producers sought to inject a significant comedy presence by casting Richard Pryor, huge at the time. Pryor’s very adult brand of humour had to be restrained and again, his presence has been a point of contention for fans. For me though, Pryor’s presence is (always) welcome and offers plenty of entertainment. It may well feel like he’s wandered in from his own film, but Pryor’s comical prowess provides something different from the rest of the franchise and a natural comic gift that was lacking in the forced humour of Whedon’s Justice League as an example.

As a kid I loved the film. Even now I’m hooked into the ludicrous and goofy charms of it. In more recent times it even feels like something of an antithesis to comic book films driven by the gritty nature of Chris Nolan’s Batman films, which have been riffed ineffectually since. A film like Aquaman conversely was absolutely head scratchingly daft, but at the same time kind of evoked Superman III for those very reasons, even if it lacked the sincere presence of Reeve, and a superhero as inherently cool as the man of steel. Likewise, if Aquaman went full balls out crazy with every modern day technique at its disposal, it became headache inducing, whilst Superman III remains fairly tame by comparison as a sensory assault. In terms of Aquaman as well, assault on the senses is an understatement, more like a back alley kicking, followed by walking straight out into an oncoming bus full of laser sharks. For Superman III‘s bonkers cyborg woman, and super computer nonsense (that Pryor sort of accidentally invents on scraps of paper), it benefits from reliable villainy from Robert Vaughan, and it has a sequence within it that almost rescues the whole film and makes it kind of essential. The scene in question may have a goofy logic in getting to that point, but Superman turns bad. Reeves revels in an opportunity to play a dark version of a character he made beloved to many. He’s great. Getting to that point may not make an iota of sense, nor is the moment that Bad Superman splits from Kent and they end up fighting for supremacy (unless you view it purely metaphysically). The infamous Superman vs Superman scene is in fact better than anything you’ll see in Snyder’s Justice League. It’s a great scene, and even now, I get a kick out of watching it.

I still enjoy this film. I enjoy it more than any post Reeve Superman movie depiction. From the Magoo opening, to Pryor’s comical hijinks (though he does become progressively more redundant as the film progresses), to Supe v Supe, and even the laughably crap finale cyborg woman (that used to freak the shit out of me when I was a kid), there’s a lot of fun to be had. If people are re-evaluating Batman Forever for similar reasoning, then certainly, Superman III is also worthy of that reappraisal too. They certainly embrace the inherent silliness of comic book stories. What are your thoughts on the film? Let us know on our social channels @flickeringmyth…