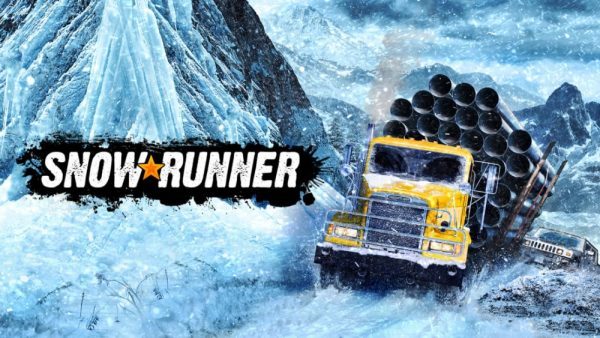 After landing on PS4, Xbox One, and PC to enthusiastic reviews last year, Sabre Interactive’s Mudrunner follow-up SnowRunner is now available for Nintendo Switch, allowing trucker simulator fans to get their fix from the comfort of their bed, couch, toilet, or wherever.

I’ve spent a good few hours with the Switch version of the game over the last few days, coming to the series completely cold but enthusiastic – it’s been lingering on my to-play list since its initial release. At its core SnowRunner is a paradoxical exercise in jubilation and frustration; joy at finally hauling your big-ass load over a perilous incline, and immense anguish at one wrong move derailing your entire run.

The game is perhaps best thought of as a vehicular version of Death Stranding; you’re given the deceptively simple task of transporting various materials from location A to location B, though the treacherous terrain – whether mud-sodden or snow-topped – naturally makes this infinitely more challenging. Like Hideo Kojima’s beguiling traversal game, simple navigation becomes the meaty puzzle of the experience – you must decide which route to take, pick the best vehicle for job, tinker with customisations, and even manipulate the environment by hook or by crook.

I’m still in the early hours of the game and, per advice I’d read online, decided to stick mostly to the opening Michigan area while I got to grips with the particulars. Thankfully, the wide-open sandbox-style gameplay more-or-less allows players to carve their own path through the contracts, tasks, and challenges on offer. And so I’ve actually spent little time in the tundra so far, though given the surprising complexity of even the basics of movement, it was most certainly the right call. 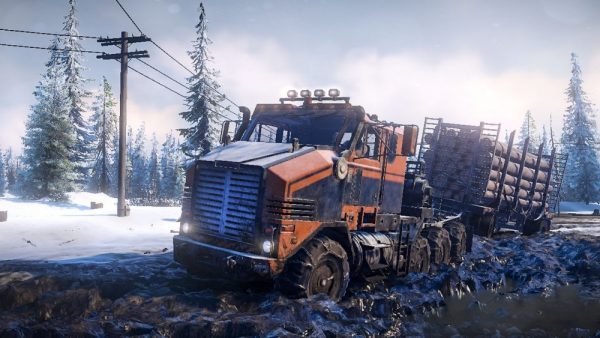 To be clear, SnowRunner is not a game designed for casual play; though on the surface it might present itself as a relaxing, cosy jaunt to be disappeared into for hours at a time, driving a truck or scout vehicle between locations is often like wading through industrial-stodge treacle. Being even slightly off on your planned trajectory can leave you frantically trying to winch yourself free by any means necessary, or even calling upon another vehicle to make the assist.

Often it’s subtler actions which can save the day – feathering the accelerator in a lower gear or turning your wheels left and right until you find the sweet spot to extricate yourself from the bog – but there’s a ton of trial-and-error associated with success. Given that even some of the earlier contracts can take upwards of an hour for new players to complete, failing at the final hurdle and having to recover yourself to the nearest garage can prove immensely demoralising.

Evidently, this isn’t a game where you’re going to get anywhere quickly, and patience is absolutely a virtue. The first few hours are a dizzying learning exercise as a result of the generally steep difficulty curve, unwieldy controls and physics, occasionally aggravating camera, and sheer wealth of information hurled at the player. Conversely, there’s also a lot that the game doesn’t really elaborate upon, and so I firmly advise new players to take a peek online where unofficial guides will save you at least a few headaches.

As a result of all this it’s fair to say that SnowRunner isn’t for everyone; it’s easy to feel defeated when you can’t figure out a way to free yourself from a tricky spot, though it’s also easy to appreciate how this brutal concoction is absolute catnip for simulation enthusiasts. The euphoria of triumphing over a tricky patch of terrain speaks for itself, let alone completing a balls-tough contract. 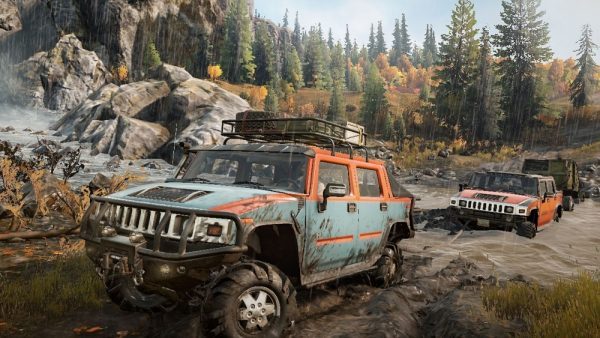 What I’m most mixed on, however, is the game’s actual presentation on Nintendo Switch. Saber, who previously ported Mudrunner to the platform, certainly deserve praise for managing to scale the game down at all, though the expected compromises on performance are relatively severe.

In both handheld and docked modes, there’s a distracting muddiness – pardon the pun – to the textures, with a huge wealth of visual detail stripped away compared to its higher-res counterparts. Texture pop-in is also commonplace, and though the framerate maintains a solid 30fps, one can still sense the Switch straining to keep this thing running, which in a game where a single wrong-footed decision can blow your entire run isn’t ideal. Loading times are also rather on the long side, as switching between locales can take close to a minute.

But my middling feelings about the Switch version are as much to do with practicality as performance; the idea of playing a trucking sim handheld sounds marvelous on paper, yet it’s less-stellar in reality. The game is so overflowing with information for players to soak in, especially in those early hours, that the rather non-intuitive interface becomes quite the chore to navigate while hunched over the Switch’s small screen. That said, the Switch’s lightning-fast sleep/resume functionality does make it easy to chunk lengthy treks into smaller, more manageable play sessions.

But considering that the game is so thoroughly centered on the importance of your car’s micro-movements, scrutinising your own progress isn’t much of a natural fit for handheld play. You can of course simply play the game docked, though the graphical fidelity on a large screen is lacking enough that I don’t think I could put up with it for the potential 100+ hours on offer here. 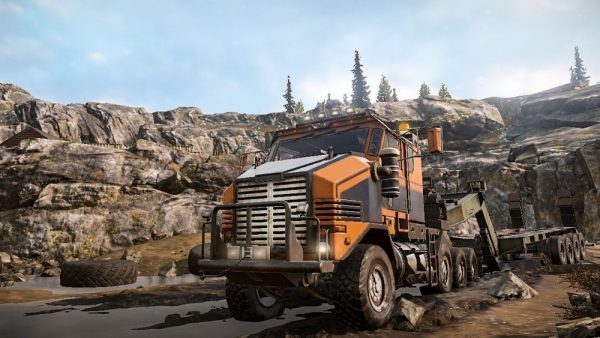 It will be a while before I feel comfortable putting a numbered score on the game, if at all, as with the PC/Xbox iterations releasing for Xbox Game Pass simultaneously alongside the Switch port, I’m honestly unlikely to keep playing this version. As such, the Switch release is really only recommendable to those who don’t have the means to play it elsewhere. SnowRunner is clearly a rich, detail-dense experience for the simulation crowd, but the concessions inherent in this port may simply be too much for anyone with other options.

Cons:
– Some will find gameplay too frustrating.
– Performance hampers the experience.
– Handheld mode isn’t a good fit for the game.