Like almost every sequel to a hit horror movie known to man, Halloween II struggles to escape the shadow of its beloved forebear, settling for a totally mediocre follow-up that’s inferior in practically every way.

Director Rick Rosenthal isn’t much of a substitute for John Carpenter, largely just attempting to ape his predecessor’s style – down to including his own first-person sequence – yet bringing none of his soul or suffocating sense of mood to the table.

Oddly enough, though, the biggest problem with the film might be Carpenter’s own script, which immediately attempts to fashion Michael Myers as a more supernatural antagonist, while also taking a more conventional slasher film bent. The bad teen acting, the generically silly death scenes and the uptick in gore; it all feels cheaper, and the eeriness of the original is sadly mostly absent as a result.

It’s also a far dafter film than the original Halloween and therefore much tougher to take seriously. From Ben Tramer’s (Jack Verbois) comically over-the-top death scene to the mob that inexplicably forms outside the Myers house and the wildly contrived plot twist – that, of course, Michael and Laurie are siblings – it ups the intensity in a way that’s actually harmful to any potential suspense Rosenthal might try to muster. 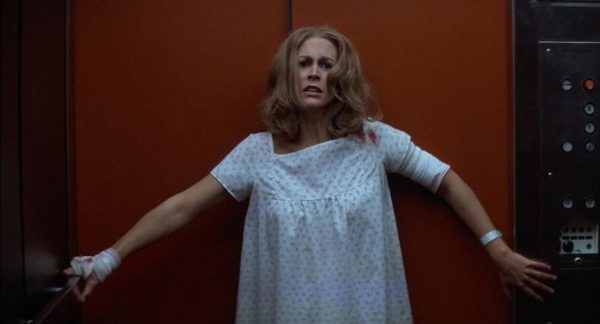 Jamie Lee Curtis is eminently watchable once again as Laurie, but obviously working with some pretty rough material. It’s almost like confining your hero to a hospital bed for two-thirds of the movie is a terrible idea, as she ends up off-screen for infuriatingly long stretches, with the focus trained instead on both Dr. Loomis (yay) and a cavalcade of mediocre supporting characters (nay).

This all leads to a pretty leaden, uninteresting finale, complete with a knife-swinging Michael Myers and a fiery ending which probably should’ve been the end of the franchise. At least Myers still cuts a creepy presence, but without worthy writing, direction or acting, he’s basically left stranded in his own movie.

Far bloodier and sillier than its predecessor, Halloween II is a warmed-over retread of Carpenter’s classic original.