A couple meets up with another couple while on vacation in Mexico, but their friendship takes an awkward turn when they get back home. 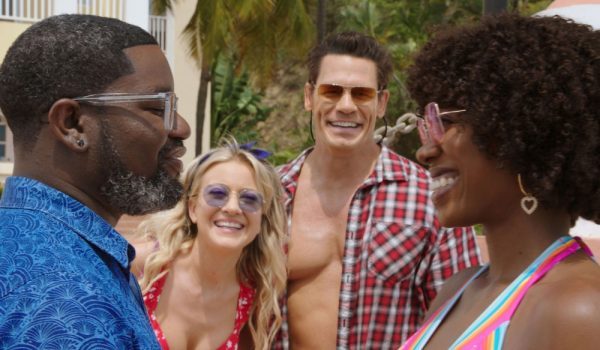 If your first exposure to Lil Rel Howery was also his hilarious TSA agent character in Jordan Peele’s modern classic Get Out, you probably also immediately found him to be a torrential comedic force even as a supporting player. Since then, Lil Rel Howery has time after time shown up in comedies ranging of various qualities, stealing scenes in all of them (there’s only one exception I can think of where he wasn’t funny, but in his defense, the whole movie was insultingly bad) seeming as if he could easily carry his own film. So imagine my surprise starting Vacation Friends, a movie I barely knew existed, when it randomly showed up in my emails, only to find out he was the star. The only thing more baffling is the lack of marketing and advertising for a reasonably decent comedy.

Once I realized what screening platform I had to use to watch Vacation Friends, it became clear that the lack of a commercial push is probably a result of the Disney/Fox merger legalities and whatnot, possibly some pandemic concerns, and perhaps not much faith for it to receive a worthwhile reception, which again seems crazy to me because there is no reason to hide this movie from anyone. Nevertheless, it will be getting a streaming release on Hulu. And yes, usually, I don’t discuss these things reviewing a movie, but the release strategy behind Vacation Friends truly has my brain tied into a knot. There haven’t been any major studio comedies released in theaters over this global health crisis, so it’s wild that Disney doesn’t even want to try seeing if people will turn up for hysterical R-rated hijinks (or maybe they can’t because of whatever deals were in place before they acquired the movie). What I do know is that the aforementioned Lil Rel Howery, ever so neurotic and hyper, plays the uptight Marcus, taking his girlfriend Nancy (Yvonne Orji) on a trip to Mexico where he plans to strictly stick to an itinerary of activities, including a grandiose marriage proposal upon arriving at their five-star hotel. Expectedly, the gesture ends up in disaster as the couple renting the room above them causes some damage that extends downward. They are free spirits Ron (John Cena, so sincere and committed to his character’s reckless tomfoolery that it’s endearing) and Kyla (Meredith Hagner, just as a carefree and also amusing), possessing relationship dynamics that couldn’t stray anymore opposite from the more cautious and reserved pairing of Marcus and Emily.

The other key qualities Ron and Kyla possess is overwhelming kindness; they don’t just try to make up for ruining the proposal but rather go above and beyond, showing them possibly too good of a time. The direction from Clay Tarver (also serving as a co-writer alongside Game Night writers Jonathan Goldstein and John Francis Daley, a duo that which in hindsight explains a lot about the paranoia and thrills packed into most jokes) is also unafraid to elevate the situations to cartoonish results (things don’t go well when Ron takes out a gun or allows Marcus to drive a boat) that, in turn, further drive home how friendly these people are. Watching Vacation Friends, there’s always a feeling that something is afoot, malicious intent will be revealed, and that the comedy will get darker. There’s alertness to it that makes the story more engaging as it goes on, somewhat with elements of a thriller. Without saying much else, the narrative eventually shifts to the wedding of Marcus and Emily (the film also knows the right amount of time to spend in each location before the comedy starts to feel stale, with maybe one exception during the middle), which Ron and Kyla end up crashing. Unsurprisingly, they quickly warm themselves up to the rest of Emily’s family that mostly look down on Marcus for his stiff personality despite owning his own construction company and successful work ethic. The usual dysfunctional family shenanigans are on display, with a golfing sequence, in particular, sticking out as terrifically funny.

New information regarding the Mexico vacation comes to light, and although the truth of what’s going on is a bit too predictable to be held onto until the third act, the revelation is also a gut-busting sequence that ends in fisticuffs and drama. The lesson here is obvious that Marcus and Emily desperately need to lighten up, and for the most part, it works because these actors are simply charismatic and funny. John Cena continues to improve in his wheelhouse of comedy, but it’s time to relish in the Rel getting his leading comedic role. Vacation Friends is one vacation worth taking with as many people as you can fit into the living room.