Dynamite Entertainment has shared its solicitations for November 2021, and with it the months cosplay covers featuring Sheena: Queen of the Jungle, Vampirella, Red Sonja, Purgatori, Jennifer Blood, Barbarella and Dejah Thoris; check them 0ut here… 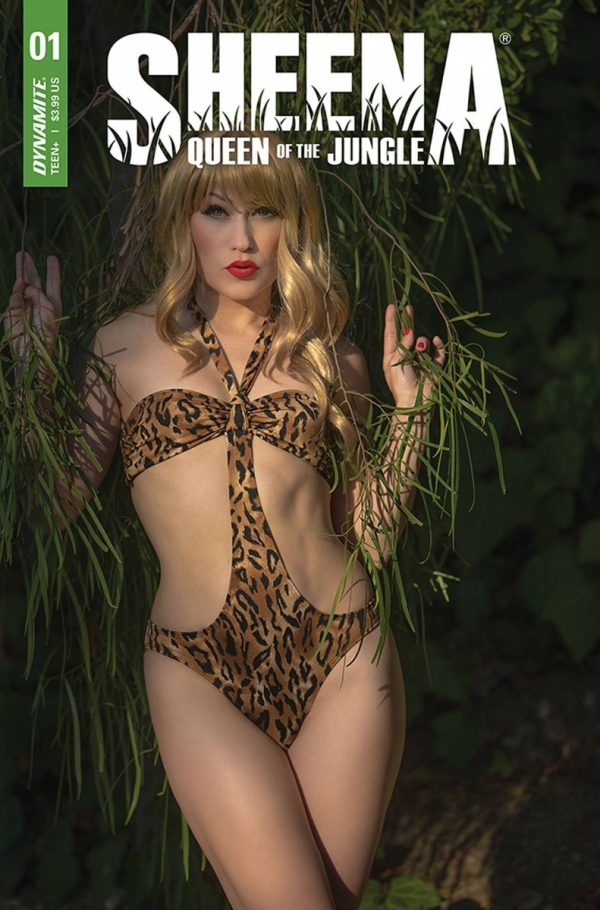 SHEENA: QUEEN OF THE JUNGLE #1

The Queen of the Jungle Returns! Featuring an all-star creative team and the most amazing roster of cover artists this side of the jungle! The thrilling adventure combines the classic elements of the legendary character along with a modern sensibility that will make it the perfect debut for fans new and old! And lookit those covers: Linsner! Parillo! Besch! Suydam! Cohen! Mooney! Cosplay!

Sheena is recruited – that’s being kind, she’s kind of forced to go! – to enter the “bio-dome” — an amazing synthesis and nature and machine, where something has gone terribly wrong. Outside the dome, she’s faced with human trickery and deceit, inside the dome, she faces the deadly jungle and a fast, murdering mystery. 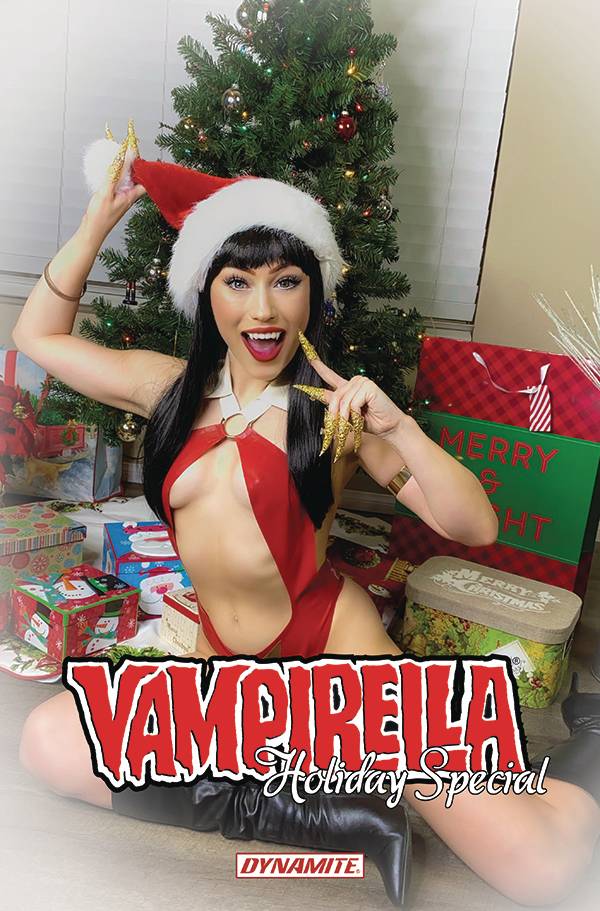 WRECK THE HALLS! Vampirella is hunted (haunted?) by THE SPIRITS OF CHRISTMAS, hunters whose holiday tradition is to hunt a mythical creature every Christmas Eve! Is Vampirella prepared for an evening against the battle-ready manifestations of The Past, The Present and The Future!? By writer/artist WILL ROBSON (Fantastic Four)! 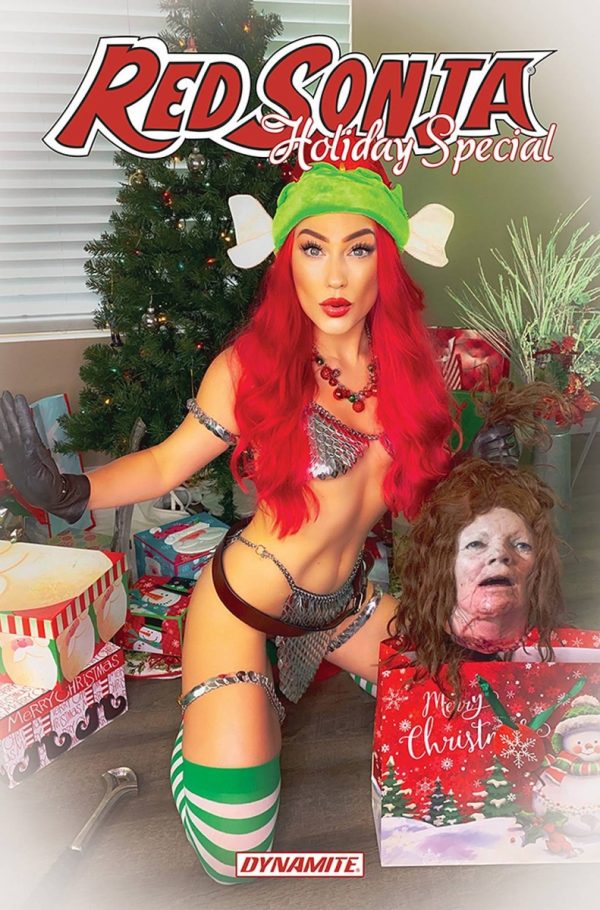 An all-new She-Devil tale, from ongoing Red Sonja architect MIRKA ANDOLFO and a cavalcade of creators! The grim Sonja is not one for ebullient festivities. But her recent “adoption” of the mysterious child Sitha has (temporarily) melted her defenses, just in time for revelry. But will outside forces aiming to prod and pillage put a pause on the party? By MIRKA ANDOLFO (Sweet Paprika)! 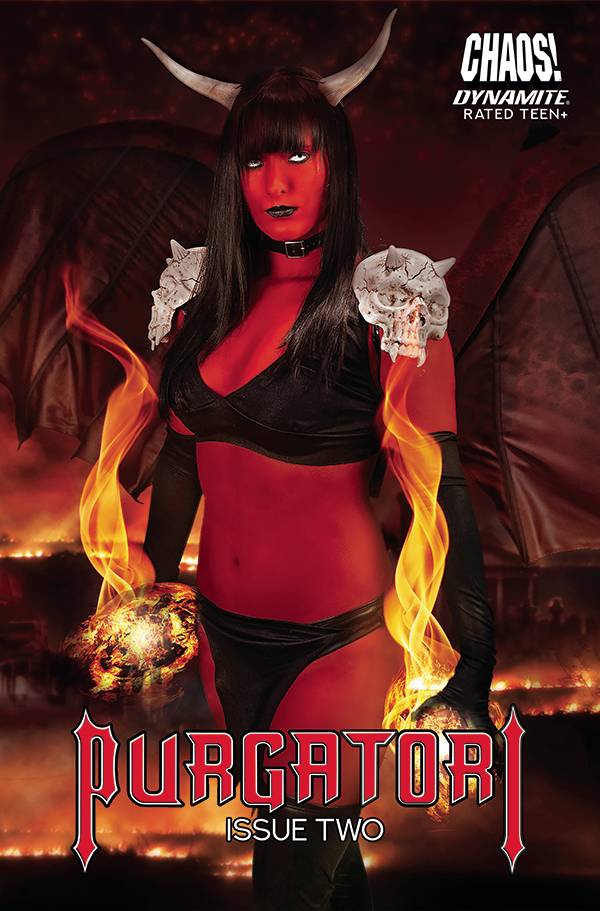 Purgatori! She’s the girl with the great horns and the biggest body count. Now she’s fighting battles inside and out — monsters trying to kill her in the trackless forests of Europe, and witches trying to take control of her one-track mind. And through it all, one central question nags her over and over – How the hell did she end up in Norway?! She’d better figure things out, or someone’s gonna get gored in the fjord. 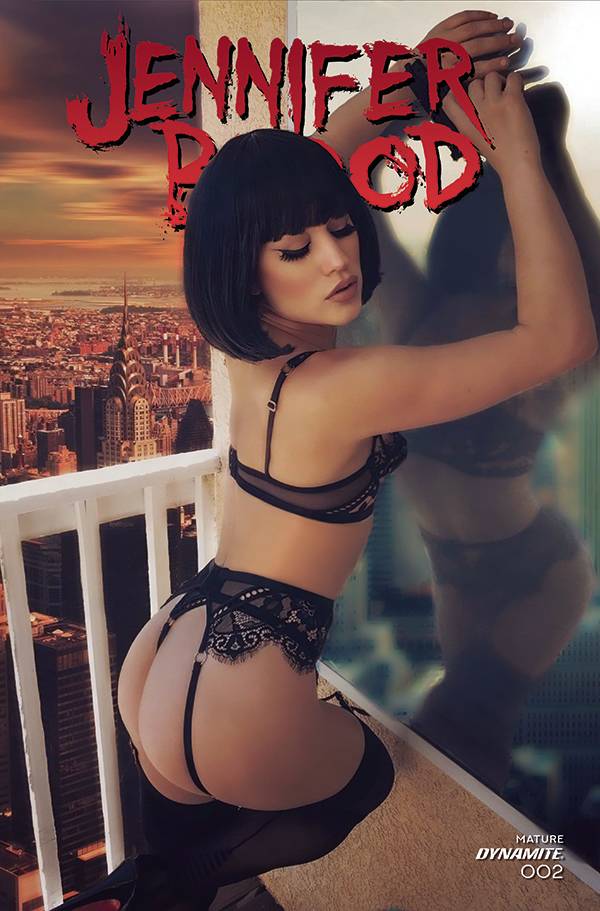 Giulietta’s hot on the trail of Jennifer Blood, and needs to get her hands on the legendary vigilante’s “war journal” to help her–but the crooked judge who has it wants to strike a deadly bargain for it!
It’s the annual Fourth of July celebration in Bountiful, and you can bet Jennifer Blood is bringing the fireworks! 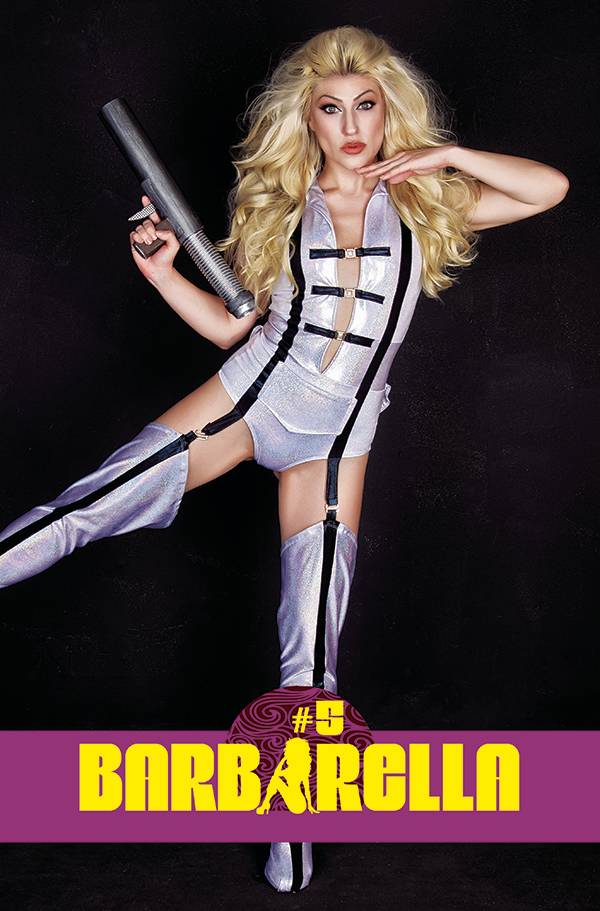 The dominos keep falling, but still, there are more to tumble as Barbarella seeks the source of a malevolent evil that enslaves, mutilates, and now can add mass kidnappings to the list. And so, Barbarella brings the love — and the outrage — to the pleasure planet, Rio, ’cause there’s nothing pleasurable about being kidnapped — or on the wrong end of a Vix scorned! 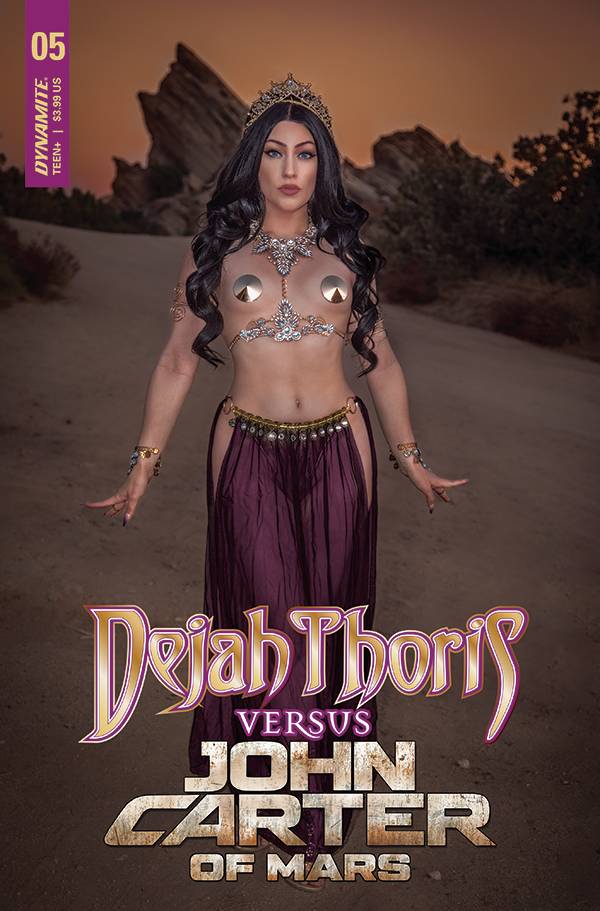 John and Dejah continue to fight IMPOSSIBLE odds! Having escaped into the random folds of time, our favorite alien power couple wage war against decaying emissaries of evil that are searching for a perfect host, and may have found one in…JOHN CARTER!? 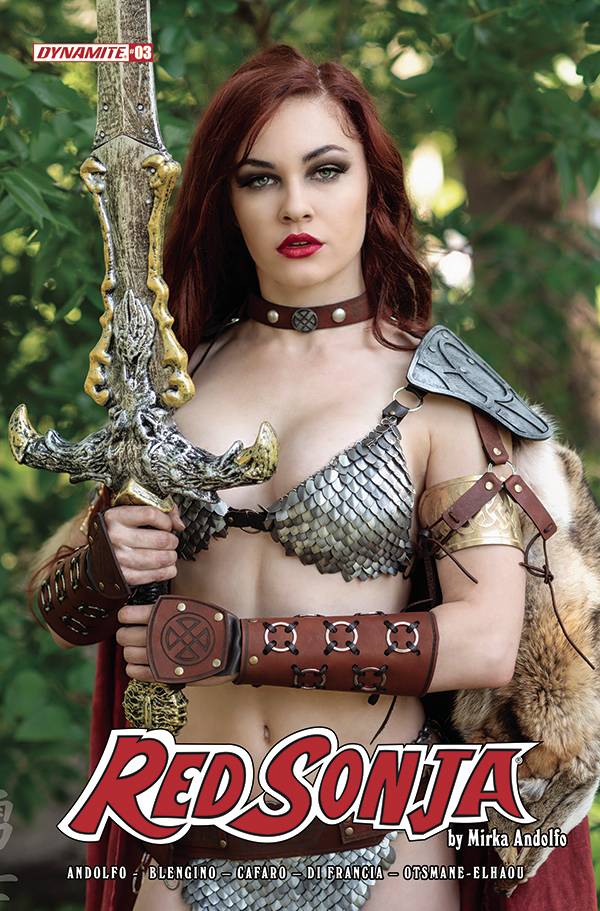 The She-Devil is in pursuit of warlocks in the swamps of the Koroths River. She will need the aid of a renegade slave, in order to battle necromancers. It is a battle of dark arts, against hardened steel.

Final issue! The worlds of Purple Sonja, Yellow Sonja, Sonja Noir begin collapsing on themselves. In order to save them, they must learn the humongous secret…what is HELL SONJA’s grand design!? 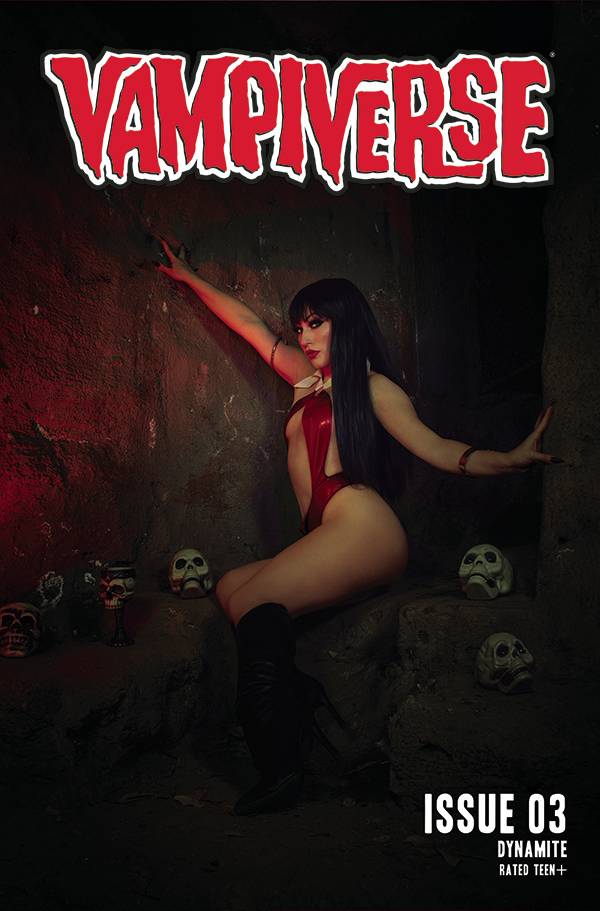 With the monstrous Bloodwing in pursuit, Vampirella, Book, and the adorable-yet-deadly Baby Prague continue their search for the missing pages from the Book of Prophecy. Along the way, they’ll run into never-before-seen Vampirellas across the fabric of time and space who’re to aid them in thwarting Bloodwing’s plan of reshaping reality. Also: in this issue we meet The Vamp, a pulp-style crime fighter who could give the Shadow a run for his money (if he carried money)! 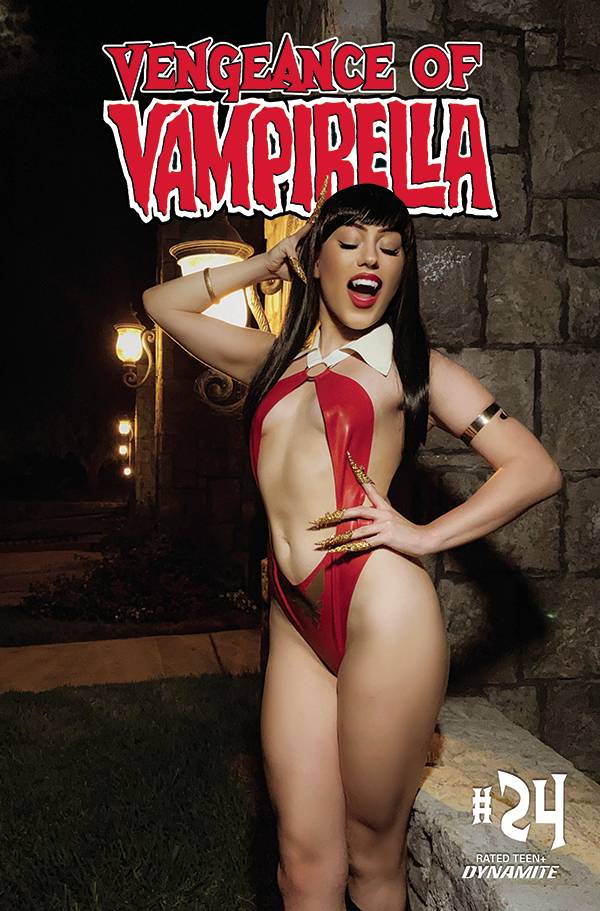 The end is nigh! The penultimate issue of Tom Sniegoski’s triumphant return to the pages of Vampirella is here!

The Servants of the Danse have taken Jeannine, and in order to save her Vampirella must leave her place of solitude and travel to the mysterious walled city called Sepulchre where she will encounter the returned Danse Macabre-and a new purpose for her existence.