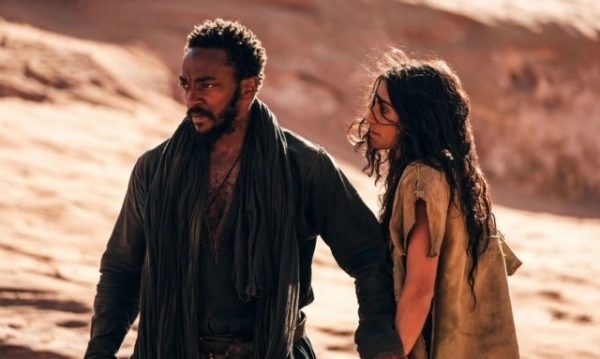 Rise of the Planet of the Apes director Rupert Wyatt has put together quite the ensemble cast for his 7th century historical epic Desert Warrior.

Per Deadline, the film will star Anthony Mackie (Falcon and the Winter Soldier) and Aiysha Hart (Mogul Mowgli) – seen in the first look image above – along with Sharlto Copley (District 9), Ghassan Massoud (Kingdom of Heaven), Sami Bouajila (Ganglands), Lamis Ammar (Between Heaven and Earth), Géza Röhrig (Son of Saul) and Sir Ben Kingsley (Shang-Chi and the Legend of the Ten Rings).

Desert Warrior has been written by Wyatt, Erica Beeney, David Self, and Gary Ross. Production is taking place in Neom and Tabuk in the Kingdom of Saudi Arabia with MBC Studios, JB Pictures and AGC Studios producing. Here’s the official synopsis…

It’s 7th century, when Arabia is made up of rival, feuding tribes, disunited and forever at each other’s throats. Emperor Kisra (Kingsley) has a fearsome reputation for being utterly ruthless. But when the Arabian Princess Hind (Hart) refuses to become the emperor’s concubine, the stage is set for an epic confrontation. It is a battle that, by its conclusion, will have changed the region forever and echo throughout history. Escaping with her father, King Numan (Massoud) into the vast and unforgiving desert, Hind is pursued by Kisra’s seasoned mercenary Jalabzeen and his bloodthirsty troops. Hind and her father are forced to entrust their safety to a mysterious bandit (Mackie), whose fighting prowess is second to none. The bandit harbors his own secrets, which will play a large part in deciding the fate of the battle. Hind inspires the fractious tribes to come together for one last stand and unite against an army that outnumbers them and is far better equipped.

“[We are] proud to be working with such world class talent across the board on Desert Warrior; it is testament to our ambition towards producing premium content for global audiences. Desert Warrior is a tale of adventure, with a fierce female hero at the forefront of the story. We hope the story will connect with audiences of all ages worldwide. Rupert Wyatt is a visionary filmmaker, and Jeremy Bolt has already proven his mettle in steering this epic project into production. The cast is a dream come true… A mix of Arab and non-Arab talent coming together to create an unforgettable movie and highlighting the rich culture we have here. This is the beginning of having Saudi be a production hub for local and global films.”