Violet realizes that her entire life is built on fear-based decisions, and must do everything differently to become her true self. With her feature-length writing and directorial debut, Violet, Justine Bateman has opted to film what, in theory, sounds unfilmable; the inner voice of self-doubt, anxiety, and defeat. It’s also not shy about bombarding viewers with an imaginative and playfully corrupt visual style that utilizes everything from a menacing inside voice known as The Committee (intimidatingly voiced by Justin Theroux), on-screen text crystallizing thoughts and fears, split-second images of a dysfunctional childhood and cruel mother, and the best performance of Olivia Munn’s career portraying this pathetic but empathetic sack of low self-esteem.

Such overwhelming negative thoughts can affect anyone, including moderately successful production agents. The titular Violet is high on her workplace’s totem pole yet also finds herself succumbing to absurd demands from those beneath her who are too lazy to do their work. The Committee orders Violet not to stand up for herself, exclaiming that confrontation will destroy her career. Speaking of that, she is also disillusioned with curating projects she genuinely cares about (and ones her friends encourage her to put into production) under a negative spell that it will be a failure, and no one will care. In a sense, she is simultaneously happy and miserable. And while Justine Bateman may be a tad over-reliant on assaulting the senses with a front-row seat cinematic envisioning to Violet’s psyche, there’s always the sense that her fears, negative internal energy, and demeaning inner voice are affecting her and believably saying things. Of all things, I kept thinking of the inexplicably successful Venom movies and how the internal dialogues in those movies grate me to the end of the earth, whereas here, even during its overwhelming moments, there’s always a purpose to be served. Justin Bateman is also a clever writer capable of shaking up the formula, whether it be overlaying text differently (usually crowding the screen as Violet’s anxiety amplifies) or having Violet slowly reclaim her life from her trepidation and those that, willingly or unknowingly, keep her silenced.

There are also relationship dynamics at play, with The Committee offering some truly terrible dating advice, planting and reasserting the seed that Violet will be seen as a loser if she is dating her childhood friend and screenwriter Red (a handsomely supportive Luke Bracey), a guy that genuinely seems to care and is always offering an ear. Violet even happens to like Red romantically, but voices and past disastrous experiences (there’s a darkly comedic flashback involving a fire) get in the way. Meanwhile, the only family she has to fall back on for communication has always been neglectful and nasty or shame her for chasing her Hollywood dreams (the production company also seems to have a handle in some video games), accusing her of living a selfish life. 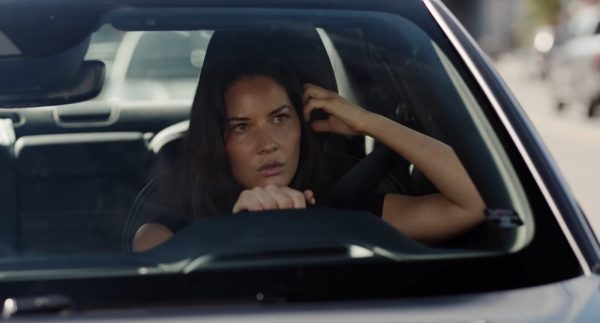 Something’s gotta give, and at a certain point, Violet does begin to gradually muster up confidence (or enter new skin, as her thoughts put it). Naturally, finding her voice is also met with resistance (especially considering she works in a male-dominated field), but there are welcome pleasures and watching her verbally fire back at those that try swatting her like a fly with malicious remarks about her personal and sexual life. Also, as the family connection further rots, a conversation starts about who is and who isn’t essential. It’s cliché stuff that comes down to bloodline not designating family, but given that so much of Violet’s self-loathing stems from a dismissive and unsupportive upbringing, the material comes across as organic.

Admittedly, the relentless style of Violet does occasionally soften the impact of the story itself and take away time from developing characters, but this is also a confidently engaging debut that speaks many truths about anxiety and self-loathing. This could have been an aggressively irritating disaster, but Justine Bateman is too tuned into the themes and emotions she is working with to let the proceedings fall apart. Olivia Munn has also never been better, and it’s a delight seeing the range she does possess in the right hands.