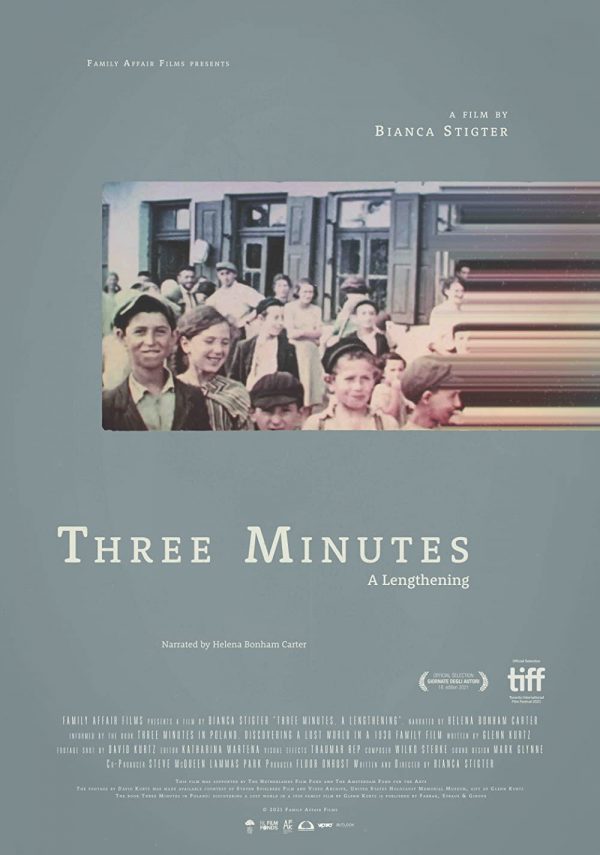 A snippet of 16mm film offers an emotionally charged, meditative glimpse into the lives of the unsuspecting Jewish citizens of a small Polish village at the precipice of World War II. 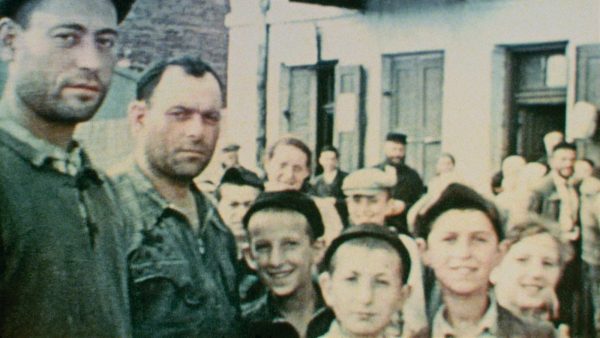 Documentary film at its best can be a potent vehicle for audience empathy, and rarely has that been truer than in Bianca Stigter’s unforgettable Three Minutes: A Lengthening. As both a forensic media investigation and a tribute to lives lost in the Holocaust, this is urgent, impactful filmmaking.

In 2009, writer Glenn Kurtz discovered a 16mm home movie in his parents’ closet, which had been shot by his grandfather David in 1938. Within the degraded footage is a three minute segment captured in the town of Nasielsk, Poland – David’s hometown a mere year before the Nazis would raid the community, leaving just 100 of its 3,000 Jewish residents alive.

Over the course of this 69 minute documentary, director Bianca Stigter repeatedly examines the three minutes to try and identify the 150 Jewish people featured within it, and broadcast as many of their stories as possible to a world that’s largely forgotten them.

Stigter’s film opens with the three minute clip, which without context might simply seem like unremarkable, mildly intriguing period B-roll. Yet knowing what happened to the sea of smiling faces, entirely unaware of the grim fate awaiting most of them, it becomes a vital historical fragment to be desperately pored over in exhaustive detail.

Narrated with appealingly plummy inquisitiveness by Helena Bonham Carter, Three Minutes: A Lengthening contains no talking heads whatsoever, simply scrubbing back and forth through the material, often stopping for minutes at a time to pause and fixate on single frames. 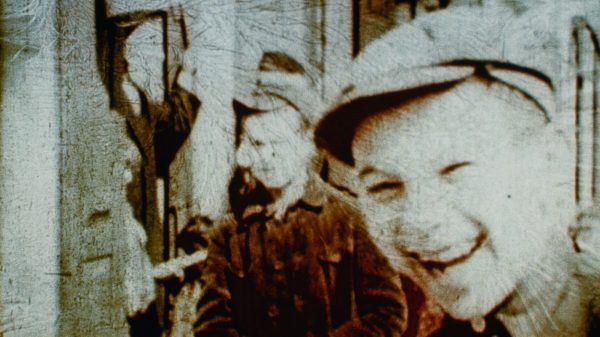 With the footage damaged by “vinegar syndrome” – the chemical process of celluloid deterioration – there are limitations to what can be discerned from it, though a VFX company was hired to help clean the digitised material up as much as possible. If only the infamous “enhance” feature from so many TV crime procedurals were a reality.

What follows is a mesmerising and totally unconventional detective story, as every facet of the video is broken down, from examining the light to determine the time of day, to considering what the citizens’ clothing says about their social status, and making sense of blurry letters on a grocery store sign – by hiring a lettering expert and cross-referencing their findings with public indexes.

This isn’t to ignore the people themselves, and while it’s sadly near-impossible to know most of them given that many of their own descendants will also be dead 80 years later, it’s a euphoric moment when we learn that a curious party viewed the film and recognised the face of their young grandpa.

The man in question, Maurice Chandler, is still alive and is interviewed for this film, providing jaw-droppingly context for the video while relaying his own experiences in the town. The second half of Stigter’s film is more explicitly concerned with the horrors that took place in Nasielsk a year later, as the Jewish citizens were forced to gather in the town square, packed onto trains, and shipped off to ghettos before later being sent to concentration camps.

This may not be the most richly “cinematic” of documentaries – sometimes the chosen freeze-frames aren’t terribly interesting, admittedly – but the spoken words lend enormously affecting and meritorious context to what we’re looking at. Clever editing – juxtaposing the smiling faces with horrifying narration, and at one point even dubbing contemporary audio of the town today over the footage – adds further soul to what we’re seeing. 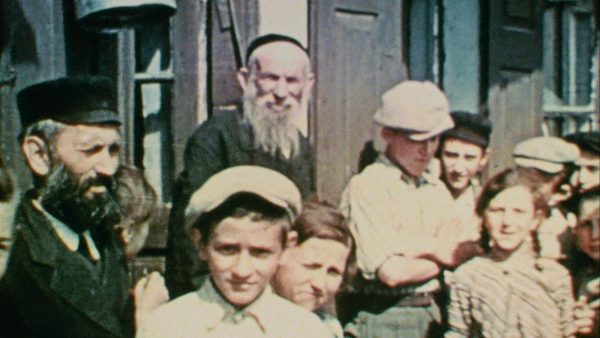 Stigter is also intently concerned with how we as audiences parse historical documents, lamenting the sense of mortality inherent in viewing any sufficiently aged film, whether home video or narrative feature. Most everyone in this footage is now dead, and before long anyone with a tangible link to it also will be. Such is the destructive power of time, and while film’s memory-preserving quality can help slow that destruction, it too is destined to join the void eventually.

Despite the bleak subject matter, this documentary is also a tribute to the joy of filmmaking; David Kurtz reportedly bought the camera shortly before he visited his hometown, and without any possible awareness of its future value, created a visual testament that people would be viewing over 80 years later. Seeing all the happy faces scrambling to get caught in the camera’s frame, many having presumably never seen a camera before, is perhaps the ultimate confirmation of film’s ability to keep a person’s essence alive long after they’re gone.

This documentary is by no means the final word on these people and their stories, but a mere snapshot. It’s entirely possible future examinations will reveal more detail, especially with the footage being made freely available online for anyone to consider.

Across its lithe 69 minutes, Stigter’s film captures the heartbreaking angst of the elusive truths we can never fully know. The fascinatingly wistful Three Minutes: A Lengthening is about as noble as filmmaking gets – an affecting feat of investigative journalism that opens a window into a tragically untold past.