From Squid Game to Fear Street, Netflix has dominated pop culture in 2021. We had Bo Burnham songs go viral on Tiktok, while more prestige fare like The Power of the Dog swept the awards. Hell, while it’s not in this countdown, even Red Notice shattered Netflix records worldwide.

The streaming service offered up a little of everything, and we’ve collected a mix of ten of the best Netflix Original Movies and Netflix Series that debuted this year. Check out our full video below, or read on for the written version of the article… Even if you don’t enjoy musicals, you can’t deny the overall love from fans and strong awards potential of this film. Tick, Tick…Boom! takes a look at Jonathan Larson, the Broadway icon who brought Rent to the world. The film is a perfect vehicle for lead actor Andrew Garfield who owns the role. This is also the directorial debut of Lin-Manuel Miranda, further pushing him deeper into the industry and showcasing him as a powerhouse artist. Mike Flanagan is a madman, and his work on Netflix has proven that. His latest work, Midnight Mass, is no different. While it’s not the outright smash like Bly Manor or Hill House, this horror-influenced religious drama is quite the viewing. You get compelling acting, a complex story, and just the right amount of WTF moments you’d want from Flanagan’s work.

8. The Mitchells vs. The Machines 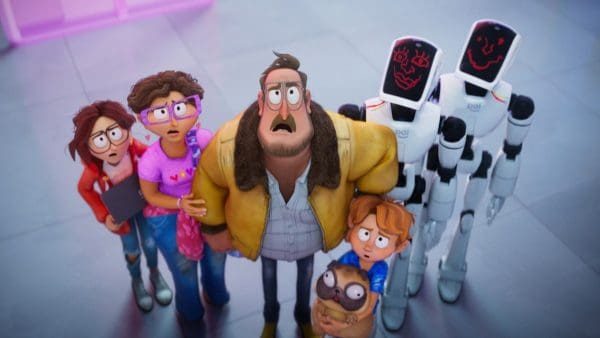 This is a potential Oscar-winning film, and it’s still not the best-animated thing from Netflix; that’s how you can tell the streamer had a strong year. The Mitchells vs. the Machines is a delightful film that brings hilarious animated action and more heart than most live-action films this year. If you want a cartoon to make you feel so many emotions, you are at the right place with this one.

7. The Harder They Fall A beautiful looking, yet so damn brutal Western. The genre has needed some new energy, and while Neo-westerns like Hell or High Water do work, The Harder They Fall is a callback to classic Westerns but with a fresh coat of paint. Honestly, though, give viewers Idris Elba, Lakeith Stanfield, and Regina King in cowboy clothes, and you know it’s going to be a good time. Director Leigh Janiak outdid herself with the daunting trilogy of Fear Street. This took the world by storm, and I think it deserves its place this high. While not every entry is my favorite, there’s no doubt this is a complete horror vision and feels so different from any other releases this year. Each of the films offers you a style and a horror homage you can highly respect yet remains so wonderfully true to itself. Zack Snyder’s glorious Netflix debut. Army of the Dead is a callback to a different era of film, yet feels so progressive. You get striking cinematography, twisted humor, and the start of a massive Netflix franchise. Snyder’s second zombie movie, but it felt like he was an old pro in the sub-genre. He respected the greats like Romero but staked his claim as a new breed of this genre. Beautiful, thought-provoking, and well-acted. The Power of the Dog is an awards contender, Yet, the film feels like more than just Oscar bait. There are conversations on internalized homophobia, classism, toxic masculinity, and just the hardships of West living during this time. Honestly, the film should be hailed as a classic for giving the great Kodi Smith-McPhee his best acting role yet. Benedict Cumberbatch will also likely win Best Actor for his turn here, something well-earned in his career. This experimental and artful comedy special captured what the current state of the world is becoming for us. You can tell Bo Burnham put his heart and soul into Inside, the art piece that took over the world early in 2021. From Tiktok audios to capturing some awards, the power of one man’s comedy took over Netflix. Positively…unlike others from this year. Netflix has a struggle adapting some of the most popular IPs like Death Note, Cowboy Bebop, and many other things. But when they picked up Arcane from Riot Games, they struck gold based on the hit game League of Legends. Not only that, but this might be their single best venture into animation. Arcane will go down as quite the moment for the streamer, but you already see this will only build over time. What an outright smash this was. As someone who loves Korean media, it’s wild to see something reach American audiences like this. Squid Game has everything you want and earned its spot as one of NetfNetflix’st important moments ever. At times it’s a hard look at capitalism, sometimes it’s a brutal horror-inspired drama, and other times it’s a meme-creating phenom. No matter why you watch this series, you were hooked either way.

What were you favourite Netflix movies and TV shows of 2021? Let us know on our social channels @FlickeringMyth…