A female vampire is inspired to kick blood and become human again when she inadvertently helps a charming alcoholic become clean. The only problem is, withdrawal could kill her. 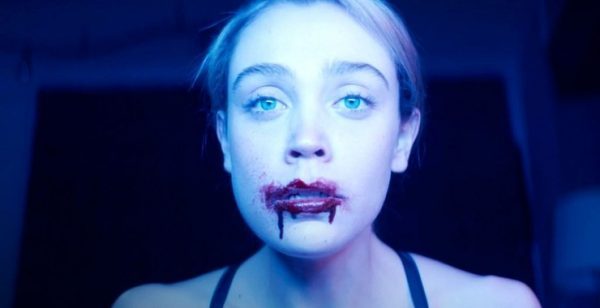 It wasn’t that long ago that the vampire genre seemed completely played out and bereft of ideas – thanks, Twilight – but it’s also a genre that’s particularly thrived in recent years in the lower-budget filmmaking realm, where creativity has to take precedent over lavish visual effects and A-list actors.

That’s a tradition continued in Kicking Blood, the latest effort from Blaine Thurier (Teen Lust), which offers up a strangely life-affirming and totally unexpected remix of the traditional vampire film.

Anna (Alanna Bale) is a vampire tired of eking out a bottom-feeding existence, forced to exsanguinate the “dregs” of society in order to maintain her form. But after stumbling across suicidal alcoholic Robbie (Luke Bilky), she finds herself increasingly questioning whether her own existence is truly worth its spiritual cost.

Far from your typical vampire movie, Kicking Blood isn’t so much concerned with blood-suckers prowling the night as it is the oddball relationship between a vampire woman and an alcoholic man. Thurier devotes much of the film to exploring the experiential chasm between vampires and humans; Anna can’t help but find most everything humans do strange, whether it’s Robbie attempting to kick booze, or her elderly friend Bernice (Rosemary Dunsmore) taking pills to stave off death a little while longer. Aptly given the film’s title, this is one of the least-gory vampire films ever made, dripping less with blood than aching humanity, as Thurier smartly draws a tidy parallel between Robbie’s alcoholism and Anna’s own need to consume blood. As much as Anna is a witness to human fragility in all its forms, her immortality of course comes with its own challenging condition, that she continue to feed on humans.

Actress Alanna Bale is quite remarkable as Anna, her striking look combining with a nihilistic moxie which makes her both perversely charming and uneasily mysterious. Her initially pitiable attitude towards humans – even bluntly telling Robbie on their first meeting, “I don’t fuck humans” – is good for some easy laughs, but her chemistry with co-star Bilky ensures their burgeoning affection for one another feels organic enough.

Though this is an intimately drawn character study through and through, Thurier also ensures to situate his characters within a firm sense of place, offering up subtle flecks of mythology and world-building which slyly elevate it from our own. It’s also a seriously stylish and atmospheric piece of work, while produced on what we can assume was a low budget. But DP Jonathon Cliff shoots the hell out of it, splashing the screen in spritely neon wherever possible, as is particularly startling during a pre-title beat where Anna’s blood-sucking euphoria is visualised in a phantasmagorical frenzy. Subtle makeup work to show Anna’s physical deterioration when she doesn’t drink blood is also highly effective, and it’s all tied together neatly by Ohad Benchetrit and Justin Small’s eclectic score, venturing from brooding ’80s-style synths to haunting violins.

At just 80 minutes in length, this thing flies by, even if after such a fiercely unique opening hour, the third act does skew a tad more conventional. Thurier perhaps tries to cram a little too much into the final reel, but nevertheless arrives at a tantalising ending leaving audiences with plenty to consider for themselves.

This stridently unconventional vampire film is a major breath of fresh air, trading buckets of blood for slinky existential commentary.