Get ready as the Man Without Fear is set to return to the Marvel Cinematic Universe following his recent Spider-Man: No Way Home cameo as Variety reports that a new Daredevil series is in development for Disney+ with Covert Affair‘s Matt Corman and Chris Ord writing and executive producing. 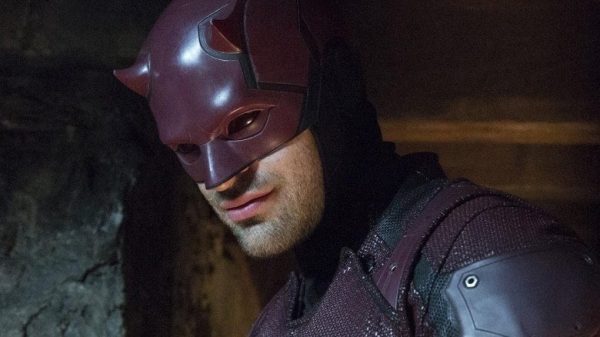 Daredevil was on Netflix for three seasons until it was cancelled along with Marvel’s other Netflix series in 2018 as Disney created their streaming service and sought to bring all their Marvel properties under one roof. However, a clause in their deal with Netflix stated Disney could not use characters from Daredevil, Jessica Jones, Luke Cage, The Punisher and The Defenders in any non-Netflix project for two years. All the series were recently taken off Netflix and moved onto Disney+, albeit in the streaming service’s Star section for older viewers given the shows’ violence and more mature subject matter than other Disney+ Marvel series and films.

The prospect of Daredevil returning to the MCU grew last December when Charlie Cox reprised his role as Matt Murdock in a cameo as Peter Parker’s lawyer in Spider-Man: No Way Home while Vincent D’Onofrio returned as Wilson Fisk/Kingpin in Hawkeye. While a official announcement is yet to come from Disney+, it can be assumed Cox and D’Onofrio will reprise their roles in the new series.

Are you excited for the return of Daredevil and hope to see other original cast members return? What do you hope this means for the other Marvel Netflix shows? Let us know on our social channels at @flickeringmyth…