Music superstars Kat Valdez and Bastian are getting married before a global audience of fans. But when Kat learns, seconds before her vows, that Bastian has been unfaithful, she decides to marry Charlie, a stranger in the crowd, instead. If nothing else, the unlikely central newlyweds at the center of Marry Me are aware of the situation’s craziness. The concept of literally picking someone out of a crowd for marriage sounds like a recipe for disaster, rightfully played up here as an impulsive reactionary response to adultery on stage in front of a live paying audience. Based on a graphic novel of all things (by Bobby Crosby and adapted for the screen by Harper Dill, John Rogers, and Tami Sagher), Kat Coiro uses the dynamic of a worldwide famous pop star marrying a middle-school math teacher to pull on the threads of different lifestyles colliding, and whether or not such a relationship can exist if they do come to like each other. It’s a story that takes the phrase “opposites attract” with utmost seriousness.

The problem is that the dynamic is stretched out for far too long, especially considering it’s a standard formulaic romantic comedy that will hit all of the expected beats. It’s the safest play imaginable for Valentine’s Day release. That’s not to say Marry Me needs to have surprises in store, but there is a lack of depth in these characters to make up for such routine proceedings—the film coasts along on mediocrity, resembling a courtroom marriage in terms of excitement and fun. Even its attempted feminist message regarding women asking men for their hand in marriage rings hollow. Real-life popstar sensation Jennifer Lopez plays Kat Valdez; a phenom completely sucked into the celebrity lifestyle: extravagant concerts (the wardrobes for these all-out glamorous shows, stage lighting, and singing are the closest the experience comes to eliciting a stylistic response), social media (complete with users nonstop commenting their immediate thoughts on every live streaming feed), late-night talk shows (don’t get excited, it’s only the highly unfunny Jimmy Fallon occasionally providing comments on what’s transpiring in the story in the form of lame jokes), and surrounded by a chorus of yes-men and assistance simplifying her day-to-day activities. She is engaged to Bastian (another popular real-life act in Colombian reggaeton star Maluma), performing the titular hit song all around the globe. At least until Kat’s most helpful assistant Collin Calloway (John Bradley, apparently taking up the mantle of being a small bright spot in otherwise bad movies), pulls her aside to give the tabloid news that Bastion is having an affair with one of the assistants.

To put it bluntly, this is where Kat has a midlife crisis breakdown on stage, philosophically questioning what love is while pointing toward Owen Wilson’s divorced Charlie Gilbert holding a Marry Me cardboard fan sign, proposing and getting married on stage. And if you’re wondering what a math teacher is doing at the concert in the first place, Charlie is dragged there by his best friend in school guidance counselor Parker Debbs (Sarah Silverman with the occasional funny line directed at the media paparazzi) and daughter Lou (Chloe Coleman) to show he’s not dull. 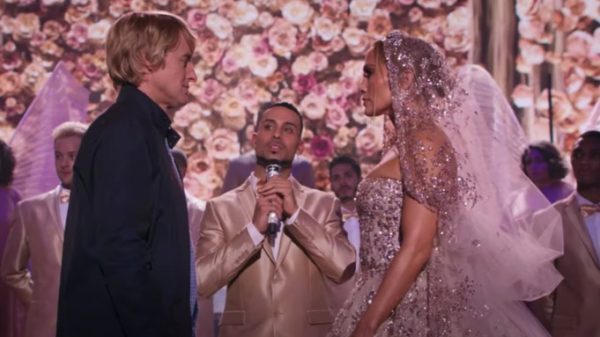 The next day, they naturally have different feelings on how to proceed. Charlie has no interest in playing along for several rational reasons, primarily because he doesn’t know Kat and doesn’t want to play a media circus game. Meanwhile, Kat assures him that it’s not a publicity stunt and that they will see what happens for real. They also decide to offer a sizable check to fund a math club to stoke further interest, something that Charlie would love to get off the ground as his daughter Lou is quite good with numbers despite having jitters solving problems on stage during competitions. With that said, the father-daughter relationship is the only moderately engaging aspect.

What’s frequently offputting about Marry Me is the message that these two characters should meet somewhere in the middle of their lifestyles to attain something fulfilling. It’s easy to get behind Charlie when he is uncomfortable having nearly every interaction with Kat documented on video or encourages her to find a little independence. On the other hand, Kat’s contributions involve pushing social media on Charlie, which is awkward to support even if it brings awareness to the math club. There’s also a somewhat unshakable feeling that the script wants to push a favorable opinion of celebrities on viewers, notably when Kat is delivered an entire rack of handbags that she goes on to state will be going to charity. It’s also just a cringe-worthy indulgence in sentimentality, as Kat pops into Charlie’s classroom to help excite the kids about math, which involves dancing while solving problems (as someone who hates math, I refuse to believe this is even possible). There is also a math saying that, once you hear it, let’s say you know that’s not the last you’re going to hear it and that it’s going to come back in the cheesiest way. Even the songs fail to generate any liveliness. For the most part, they speak directly to the characters’ feelings without any complexity. There is also never any question about what songs are written for who, even if the screenwriters try to achieve some misdirection that way. Perhaps most problematic for a romantic comedy, these characters never feel like they are meant for one another. Based on that takeaway alone, it’s safe to say you can leave Marry Me at the altar.