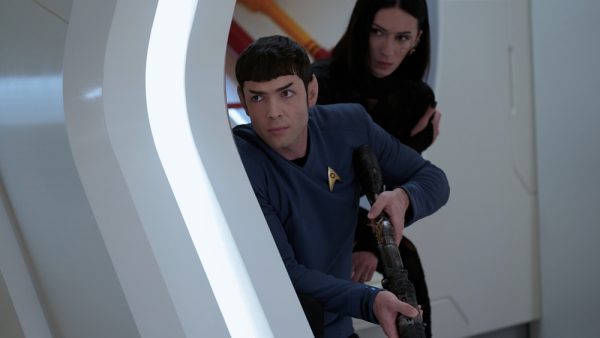 At this point, it’s possible to predict with a good degree of certainty what an episode of Star Trek: Strange New Worlds will contain. Some light and breezy humour, a drop of action, a deep dive into one character. What is less easy to predict is the ratio with which these components will feature in an episode. “Spock Amok”, for example, went heavy on the humour and character, while Memento Mori treated audiences to spectacular action with a lesser focus on character development. This week, “The Serene Squall” decided to balance all three, almost equally.

On the plus side, the episode’s action sequence, where the pirates take the bridge of the Enterprise, is a perfect Star Trek set-piece. It’s small scale, clearly shot, with some fun hand-to-hand moments which serve as a reminder of Spock’s Vulcan strength. Similarly, the character work was also handled very well. Largely, this can be put down to Ethan Peck’s Spock.

His character’s story is quickly becoming the most compelling aspect of the show, while his performance seems to strike the perfect tone for each episode. Along with Gia Sandhu’s turn as T’Pring, the ongoing story about his struggling romantic relationship might be the series’ most believable and grounded arc. The only downside is that there seems to be a noticeable amount of wheel-spinning. After their shared story in “Spock Amok”, their relationship is in pretty much the same place it was before, albeit with T’Pring more interested in satiating Spock’s human side. But, to be fair, failing relationships do tend to have their fair share of wheel-spinning too. Regardless of how it progresses in the short term, their relationship is now firmly one of Strange New World’s biggest draws, even if its conclusion is already known. That’s some achievement.

Unfortunately, the episode’s character development also highlights the limitations of episodic storytelling. Captain Pike’s anxiety over his future disfigurement and disability was a consistent component of the early episodes, as the character sought to reconcile his fears with his duties as the captain of the USS Enterprise. That conflict has been entirely absent from the most recent set of episodes. Clearly, not every episode can examine that conflict because each episode is mostly telling a new story with a focus on a different character. But a reminder of that conflict, here and there, would be welcome because it’s not as if that plot has had a firm resolution.

The issue adds to the growing feeling that the team behind the show aren’t quite sure what to do with Captain Pike and his formidable hair. Early on, it was clear that here was a captain who wasn’t worried about breaking the rules, as long as he was justified. He would do his all to protect his crew, physically and emotionally. He was confident, kind, charming, and stern when necessary. However, increasingly, the character’s sense of humour and semi-awkwardness is undermining those established traits, and mostly come across simply as smug. A lot of this – admittedly small – problem is confined to the script. Much of the jokes in the dialogue, and quippy moments from Pike don’t work, and hopefully the series recognises that it’s possible to be fun, light, and optimistic without the moments of tired Joss Whedon-esque humour.

As the episode comes to its conclusion, it takes the decision to bring in a character from Star Trek’s past, who was much hinted at as the story progressed. That character is Spock’s estranged half-brother Sybok. It is, ostensibly, a big dramatic reveal. But, while fans of Star Trek V: The Final Frontier (and there aren’t that many of them) might rejoice at the return of the character, everyone else is left with a small shrug of the shoulders.

It’s akin to the Samuel Kirk reveal in that it would be more frustrating if it wasn’t also completely uninteresting. If the series has proved anything so far, it’s that there is just no need to rely on callbacks and cameos for the sake of storytelling. If anything, they’re just a hindrance. Hopefully, however, they can make more out of Sybok than they have of Samuel Kirk, who has been utterly surplus to requirements so far.

With this list of complaints, it would be easy to come to the conclusion that it is a bad episode. It isn’t. Not at all, actually. It does have flaws, but taken as a whole, none of them detract from the fact that it is very entertaining. Nurse Chapel gets her best episode yet, while guest star Jessie James Keitel is fantastic as their charming and duplicitous pirate Captain Angel. It has some great visuals, and more moments which show what everyday life on board the starship is like. But, without a doubt, Strange New Worlds still has room for improvement. Actually, that’s pretty exciting.