Remember the theme song for The Spy Who Loved Me? Nobody does it better… Well, when it comes to being the undisputed Queen of Blaxploitation cinema, really, nobody did it better than Pam Grier. Modern audiences will be more versed in Grier’s work in Jackie Brown, or in her TV work including The L Word. However, for fans of 70’s exploitation cinema, and particularly Blaxploitation, Grier was a magnetic icon back then.

Grier worked with a number of well known B film specialists, including Roger Corman. Along the way she would work regularly with director Jack Hill, who moved from horror films in the 60’s, to predominantly blaxploitation films in the 70’s. His most famous works are the aforementioned three Grier classics, and the dynamic between the two obviously created cinema magic. So lets look back first at a Grier, Hill and Corman classic… Why stop at an association with B movie God Roger Corman when we can also include the Philippines’ answer to Corman (by way of Lloyd Kaufman), Cirio H. Santiago? He produces this film shot in The Philippines. The Big Bird Cage sees Grier teaming with the late great Sid Haig (note… Haig appears in the next two films) as revolutionaries. When a social climber (Anitra Ford) is caught up in one of their acts, she’s thrown into an all woman concentration camp.

Of course this is a Corman B picture, that borders on Russ Meyer in moments here, so there’s ample, gratuitous nudity and cat fighting. When Blossom (Grier) ends up in prison it’s up to her partner Django (Haig) to infiltrate and organise a breakout. There’s a lot of fun to be had here, and some nice action. This is definitely straight up exploitation rather than one you’d necessarily identify as a Blaxploitation film, but it’s that Corman (and indeed Santiago) stamp. It’s pure B movie cheese, comical (intentional for the most part I might add) and the dynamic and chemistry between Grier and Haig is fantastic.

Grier played tough very well. It was always made believable, fallible, and about a great inner strength in Foxy Brown and Coffy for example. Here, she’s playing a more straight up badass. She runs the show with Haig. She gets to the prison camp and she’s the baddest bitch there. The film just meanders a little in the middle but there’s some great set pieces and Grier, Ford and Haig are all fantastic. Bow-chicky-bow-chicky-bow-chicky… the music kicks in. You know you’re in a Blaxploitation film. Grier, Hill and Haig are all on board for what would probably be Grier’s most iconic role of the 70’s. A straight up tale of revenge in the inimitable blaxpo style. Revenge with a funky soundtrack and killer lines. Grier is great here. After her boyfriend is murdered she infiltrates the underworld by taking a job as a hooker for renowned Madam, Katherine Wall (Kathryn Loder, who is excellent).

There are some classic sequences and those slightly outdated elements like catfights, and large aggressive lesbians (seems a recurring pattern in all three of these Hill films) when Grier starts a mass brawl in an an all female gay bar. Still, there’s always been a dash of a wink and nod in Blaxploitation, and everything is a little OTT.

Grier is as always, fantastic. Hill orchestrates the set pieces well. Some films in the era, if you think of Dolemite for example, were almost comically haphazard with fight scenes etc, because there were a lot of guys moving blindly into film-making either in front or behind camera. Hill’s films always had a certain polish that the best Blaxploitation films like Shaft and Black Caesar also had. As vigilante hero, Grier is great. There’s some emotional depth here too, but mostly she’s cool, whether she’s starting bar brawls, blowing up hillbillies or taking out gangsters. Antonio Fargas also makes a welcome appearance. This film, complete with its own (brilliant) titular theme, song is Grier’s best work of the era. Here she plays a ‘sexy nurse (according to the promo).’ I mean, she is, but you know…we’re in 2022 now…so Grier plays a nurse whose 12 year old sister ends up overdosing on heroin. With seemingly no recourse from the law, Coffy is driven by the desire to seek vigilante justice on the criminals who hooked her young sister (and anyone else) onto drugs. She works her way up a criminal chain up to corrupt politicians.

In this triumvirate of Grier/Hill (and Haig) films, Coffy is the best. It’s tighter than the others, without any middle sagging, has the most emotional resonance and the most blunt and slickly crafted action. The film is brutally violent (the others are, but almost bordering comically). Haig is great as a gangster here in a small role. He was always a wonderful and charismatic presence. The film is all about Grier though and she’s magnificent. Aside from being cool, having great finisher lines and (probably unnecessarily) taking her top off a fair bit, she’s also got a lot of heart. There are a few emotional scenes and she’s fantastic. It may have surprised some how good she was in Jackie Brown as an example, but it really shouldn’t have. Grier’s a wonderful actress.

Elsewhere Robert DoQui also appears as a pimp, and fans of Robocop will remember him as the police chief. Coffy opens and closes with a real bang and with everything in between tightly honed it’s probably the definitive female lead Blaxploitation film (probably female lead action film full stop in that decade). 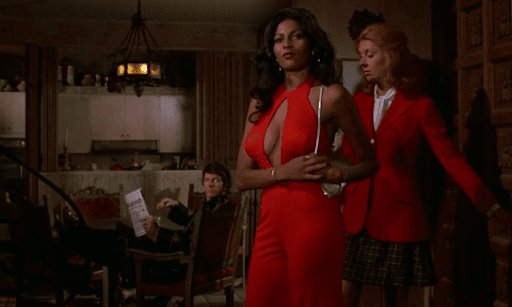 There are a number of other classic Grier films to check out from the era, including The Arena (another Corman), Sheba Baby and Friday Foster. What’s your favourite Pam Grier film from the 70’s? Let us know your thoughts on our social channels @FlickeringMyth…