Chris Connor reviews the premiere episode of House of the Dragon… 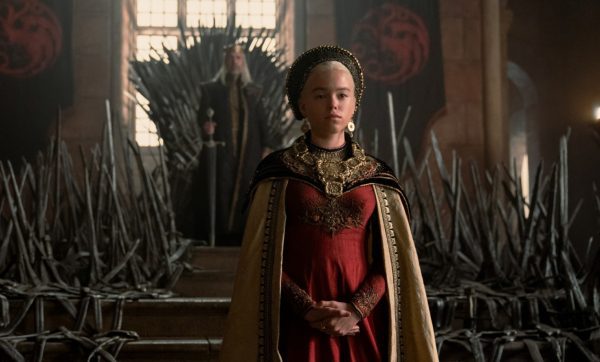 Game of Thrones was a cultural phenomenon, transporting George R. R. Martin’s A Song of Ice and Fire novels to the small screen and earning a legion of fans. The series was notable for its shocking, gruesome deaths and twists as an array of despicable characters fought for the Iron Throne in King’s Landing.

Once the series moved past Martins’ novels around the fifth season mark the level of critical acclaim gradually diminished with many feeling the ending was unsatisfactory. However, this hasn’t prevented further projects planned for the world of Westeros, the first of which, House of the Dragon, charts the downfall of the Targaryen family, 200 years before the events of the main show. House of the Dragon retains the scope and ambition present in Thrones with its opening episode containing much of the politics and treachery fans came to love in the original series. While still telling a sprawling story that covers a broader timeframe, the show feels more intimate with much of its focus on the Targaryen family and their internal battles for power that will ultimately come to be their undoing.

The series boasts a host of well known names from British film and television, led by Paddy Considine as King Viserys, Emma D’arcy as his daughter Princess Rhaenyra, and Matt Smith a treat as his scheming brother Damon. Rhys Ifans rounds out the main cast of the opening episode as the Kings hand Ser Otto Hightower, keen to prevent the reckless Damon from taking the throne. Sound of Metal and Ready Player One star Olivia Cooke also features as Ser Otto’s daughter Alicent. Fans will welcome greater levels of input from Martin, with the series incorporating elements of his 2018 novel Fire & Blood which charts the history of the Targaryen family. As such the series immediately feels a worthy successor to Game of Thrones, bringing the sense of grandeur and action of its predecessor.

While the opening episode is a slow burner, it gives context to Westeros at this moment in its history during a relatively peaceful moment before the rule of the Mad King and the wars and unrest that will follow. The bulk of the drama stems from the desire for Viserys to have a son to continue tradition and reluctance for his court to break from this for fear of unrest. This sets up what will likely be an overarching thread, with many likely vying for Viserys’ throne behind his back. In spite of this, so far House of the Dragon doesn’t feel like a copy of its parent series with the story more contained and unburdened by the sheer weight of the families and characters the main series introduced.  The opening episode of offers much potential for the show moving forward, capturing the essence of Westeros with lavish costumes and impressive special effects. What is perhaps more impressive is the subdued nature of the performances and the love and reverence for the world the show inhabits, which is sure to please both long term fans of Martin’s novels and HBO’s Game of Thrones adaptation.

With reviews largely positive, it seems safe to say the game of thrones is on again and it will be intriguing to see where this part of its journey takes us.