A small group of Russian soldiers have the task of taking Hitler’s discovered remains back to Stalin in Moscow. Given how prevalent World War II stories have been and still are, the most intriguing ones sometimes come from historical fiction and what-if scenarios. It’s also tough to imagine anyone that likes movies coming across writer/director Ben Parker’s Burial and its attention-grabbing plot synopsis, not finding themselves tantalized. During the last days of the war, a small Russian squad is tasked with transporting secret cargo to Stalin; yes, they do not realize they have Adolf Hitler’s rotting corpse inside a crate that might as well be a coffin.

Russian Intelligence officer Brana Vasilyeva (a determined Charlotte Vega, full of conviction) is as mission-focused as they come (especially considering how personal she takes the assignment) but surrounded by a questionable bunch. There’s the captain, quick to give up and go off to a nearby village and get wasted while harassing women, a shy and reserved soldier that doesn’t come across as battle-tested, and some other comrades that blend into the background without much personality. The only other noble, resourceful, and dependable teammate is Tor (Barry Ward), who does indeed get his nickname from having killed someone with a hammer but is also greatly feeling PTSD effects. 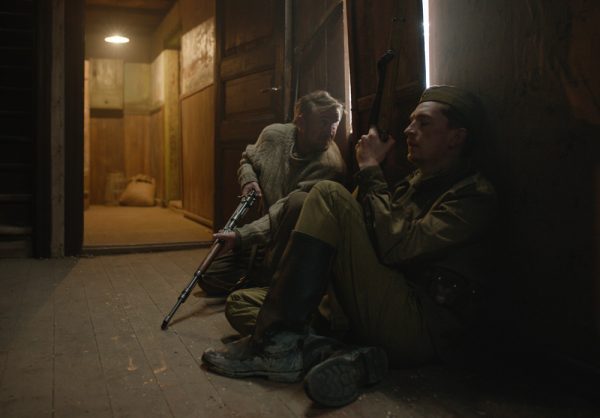 Germans are also aware that this operation is underway, with wolves (a German resistance force operating behind enemy lines) who could potentially strike at any moment. To counteract this, the Russians are instructed to bury the cargo every night before setting up camp and sleeping it; it doesn’t matter if they die, just don’t let the body fall back into German possession, subsequently shaping history however they see fit. Such strict rules are one way of elevating the stakes of this treacherous mission, which naturally only further amplifies once everything goes sideways and everyone else realizes what they have been riding along with and lugging around.

The one downside is that Hitler’s dead body is somewhat irrelevant to the unfolding events, but the script is sharp enough to weave in thoughtful threads regarding the war itself, humanity doomed to repeat itself, and a carefully considered connection between Brana and Gaunt (Tom Felton), a Polish villager that was forced to fight for the Germans during the war. It doesn’t quite cut deep into some of these topics to result in something profound, but it’s nonetheless engaging and well-written. There is also an unnecessary brief horror angle involving hallucinations; these soldiers getting picked off one by one is terrifying and suspenseful (doubly so factoring in the impressive production design and at least one instance of gnarly, gory makeup effects). If anything, Burial is a full-fledged war movie that wisely occasionally stops to consider the humanity of these characters and the cost of war.

Burial also has a darkly comedic bent, most notably when a German soldier attempts to create a video twisting the truth about Hitler’s body. Mind you, it’s also an uncomfortable laugh considering how dependent contemporary politics still is on spinning narratives into profitable lies, perhaps more than ever nowadays. The story is bookended by a look at Brana as an old woman (Harriet Walter)  following the fall of the Soviet Union and handling a neo-Nazi home intruder (David Alexander). It’s a tad superfluous, but it solidifies these themes’ poignancy and functions as a fine table setter for the bullet-soaked, tense B-movie action.