To coincide with its wide release this week, we sat down with Living director Oliver Hermanus to discuss the film playing at the festival, working with the acclaimed novelist Kazuo Ishiguro and the challenges and opportunities presented by adapting Akira Kurosawa’s Ikiru and reinterpreting it for a modern audience. How was having Living as a Gala at the London Film Festival?

Really wonderful. It was our homecoming. To be honest, it was the place it was most important to show the film, it’s a film about London and LFF takes place a block away from where we shot the film at County Hall. So it was a very special night for us all.

What was it like having Ishiguro on the script? How was working with him?

Wonderful. It was a really generous experience working with Ishiguro because he doesn’t fashion himself to be a screenwriter, he really does see himself as a novelist. So he approached this, this process of writing with a real openness to me and the openness to a collaboration. That was the most I could have hoped for. So it was really just a joyous experience.

Why do you think now’s a good time to reinterpret the story of Ikiru?

I mean, the film was never timed as a sort of must happen now kind of film. But it did happen now. And I think if we were to then just sort of look at what it has brought to the world, because it now exists, I think it is this question of looking up for a second maybe up from our phones, particularly, and kind of just taking a minute to register where we are in our lives and whether we are connecting with others, and whether we are kind of you know, what our contribution and our output has become.

We live in a world now where it’s becoming increasingly harder and harder to do this, to live have a weekend where you don’t look at your phone, or respond to an email or send a mail, or think about work or connect, we don’t disconnect as much anymore and be present in our lives. So I think that’s something that the film really does address through it being set in the 50s. Were you always keen on it having the 50s setting and  keeping the original time period?

I think for Ishiguro that was really critical because it was a sort of comparison between these two places at the same time. These two men would live in parallel universes, Japan and England. It made sense that that would be something that we would sort of celebrate.  I am very happy that we did the period version of this because it allowed me to sort of play into my period film fantasies, title sequences, etc.

The title sequence is stunning, how long did it take to get that right?

The title sequence came to me very late one night, sort of in the middle of the night, and I was toying with many different things in terms of, I knew what I needed to be, I knew that I wanted to have all the big credits at the front. And loads of you know, my favorite type of sequences were East of Eden, and I would watch that over and over. And then I found the footage that we used for the title sequence. It made perfect sense to be the way that the movie opens. It’s one of those sort of, you know, finishing touches. What are your first memories of watching Ikiru?

I saw it at film school in one of those 9am classes. It was like, oh, goodness, a two and a half hour Japanese movie. I mean, the thing with all Kurosawa films is that they’re so front footed. Kurosawa was a really, confident, filmmaker, really determined to, I suppose, expose the unraveling of these stories with quite an engineered innovative eye and Ikiru has a very famous plot twist.  Then I rewatched it, what 10 years later, when I was approached to do this.

Why do you feel Kurosawa’s work is so rife for adaptation?

There was a real period in Hollywood in the 70s, you know, where he was just very fashionable and filmmakers like Spielberg, and Lucas was so inspired by the the energy of Kurosawa’s work, like what I was saying is his confidence with narrative design. And it was exciting. And they I think, also he was just from the other end of the world, and they just found him to be this counterpoint. It made sense that he would inspire such iconic American cinema all the time. I think now you’re right, you know, Kurosawa is synonymous with adaptation.

This work wasn’t, wasn’t born out of that specifically. Ishiguro really wanted to do this because he wanted to do something with Bill Nighy to give Bill a piece of work that would put him front and center. Ikiru was the vehicle for that in terms of becoming Living. 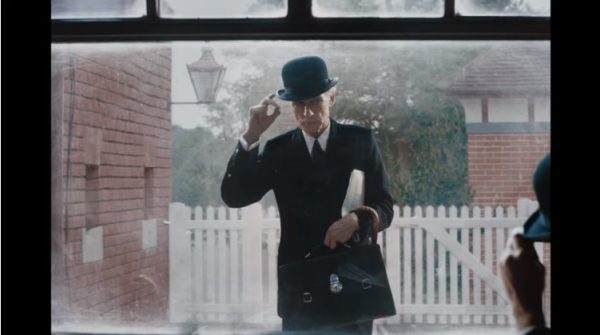 How did you find working with Bill Nighy ? He’s earnt some of the strongest reviews of his career in this role.

Obviously, the original has a very Japanese feel to it,  this is a very British film, how was balancing the kind of Britishness of it and making it stand out?

Ishiguro was really amazing, he fed me a lot he would send me DVDs during lockdown, these boxes would arrive in South Africa full of DVDs, and films that you would never find from Ealing studios from the 40s, and the 50s. And, and I would watch these, and I would absorb them. It gave me this gave me this really tailored introduction to to a period in Cinema history out of England that has, I suppose, died in a way that he really loves. So and that inspired me, and I think the film now is a is a sort of my interpretation, a homage to these forms that are our passions of Ishiguro’s. One of the standout sequences was the seaside sequence, which obviously in the original film is in Tokyo. How was reinterpreting that?

It’s always nice to go and location when you’re shooting and take everyone away for a bit. That was a sequence of the form that was my sort of homage to Edward Hopper, I sort of wanted to sort of put Bill in a frame where he was a lone figure in a very muted color palette with the sea the background and sort of idyllic location with a real sense of melancholy about it. So it had this sort of multiple layers of fun that we were trying to have. And yeah, as I said, it was nice to go to the seaside.

Many thanks to Oliver Hermanus for taking the time for this interview.