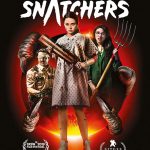 To celebrate the release of SNATCHERS – available on Blu-ray & DVD 17th February – we are giving away a Blu-ray courtesy of Warner Bros. Home Entertainment. Chosen as one of Variety’s “11 Best Movies of the 2019 SXSW Film Festival”, and described as a cross between ALIENS meets MEAN GIRLS, SNATCHERS was initially released […]