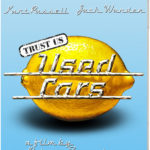 Eureka Entertainment will release USED CARS, Robert Zemeckis’ classic 80s screwball comedy starring Kurt Russell and Jack Warden, for the first time on Blu-ray in the UK as part of the Eureka Classics range from 12th August 2019, and we have three copies to give away! A hilarious cult favourite from director Robert Zemeckis (The […]