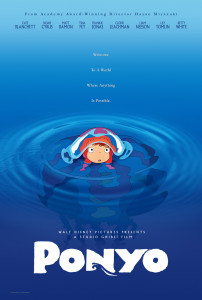 Having watched very few Studio Ghibli films, and adding Ponyo the list simply because it’s Studio Ghibli season, I have to say I never realised what a crazy world Hayao Miyazaki lives in. But yeah, he’s probably also a genius.

Ponyo is delightfully heartwarming and cute. Ponyo herself is an adroable goldfish princess who wants to be a human after falling in love with Sosuke, a human boy. Her overprotective and prejudiced father locks her up but she manages to escape and, typical of a Ghibli film, cause havoc left, right and centre.

Out of the Ghibli heroines I know of, Ponyo is by far the cutest. She’s entertaining and wise in her childlike nature. Her interactions with Sosuke and Lisa are sweet, and her size evidently does not equal her strength and soulfulness. Meanwhile, Sosuke, although the protagonist of the story, is outshone by Ponyo despite his honest and noble nature. Sosuke values his mother and father, and spends time with the senior citizens at Lisa’s work, showing him to be an honourable boy.

In fact, there aren’t many inherently evil characters in Ponyo, merely mis-understood ones. Ponyo’s father Fujimoto is a typically overbearing dad who manages to alienate his daughter in his attempts to coddle her. His fear of the unknown, humans, ultimately leads to the events of the story, but he redeems himself with his kindness towards the end of the film. Meanwhile, Lisa starts off as a shockingly negligent mother: she leaves her five-year-old son home alone, drives like a maniac and takes Sosuke out in a raging storm. It seems that parental responsibility is a consistent theme in Ponyo, with Ponyo’s mother Granmamare (some kind of goddess sea woman) and Lisa having a heart-to-heart towards the end of the movie, probably about motherhood or something.

Meanwhile, another continuous theme of the film is, as with Spirited Away, a criticism of the human destruction of the planet. Fujimoto hints that the tsunami caused by Ponyo is a result of waste being dumped in to the ocean. After the tsunami, Sosuke and Ponyo watch beautifully animated sea life beneath them, weaving in and out of flooded houses and roads as the children sail in their little boat. The message is one of nature and urbanisation intersecting and existing alongside each other: something which is reiterated when all of the boats become piled on top of one another in the ocean.

As always, the accompanying score perfectly compliments the whimsical tone of the film and the characterisation and narrative are both unsurprisingly and distinctively Japanese in themes and content. You couldn’t really expect any different from a Studio Ghibli production, but that isn’t to belittle it in any way. Ponyo is as delightful, moralistic and humble as you would expect.