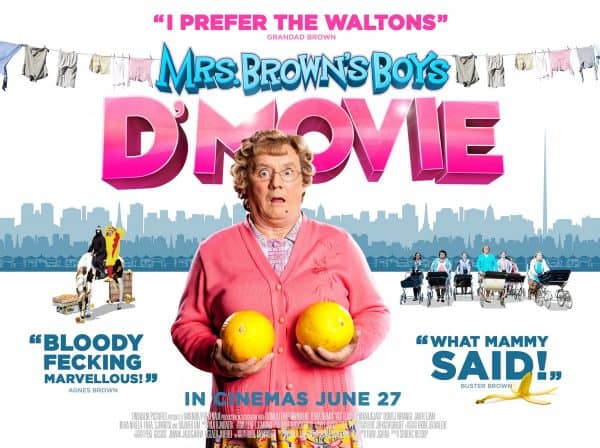 A company tries to shut down Mrs Brown’s fruit and veg stall. They can feck off. 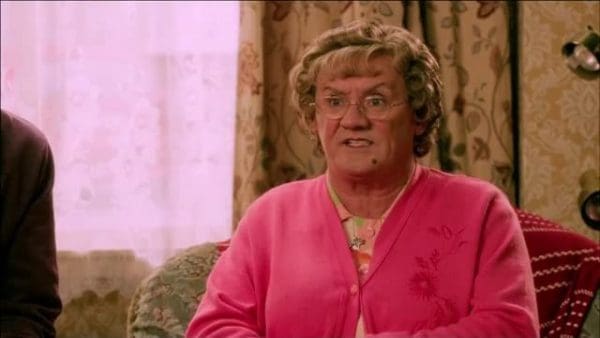 There were two warning signs flashing as I headed into the screening of Mrs. Brown’s Boys D’Movie. Number one was fairly obvious – it’s a movie adaptation of a TV show which, nine times out of ten, end up as a complete disaster. The second warning sign was that Mrs. Brown’s Boys D’Movie was not screened for critics. This may not sound like a big deal, but it’s usually a sign that the studio has no faith in it, because the film is terrible.

Well, both warning signs were wrong. Because Mrs. Brown’s Boys D’Movie is… well it’s not terrible.

Based off the successful and multi-award winning show, Mrs. Brown’s Boys D’Movie sees Agnes Brown’s market stall being under attack from Russian mobsters who want to buy it with the help of a local politician who claims to be helping the market. Further to that, Mrs. Brown discovers that the tax man is after the €90-odd that her grandmother never paid, which has since inflated to €4 million.

One of the reasons Mrs. Brown’s Boys worked as a TV show is because its creators didn’t mess with the formula. Brendan O’Carroll took his stage show about an Irish-Catholic family and put some cameras in front of it. If the actors corpsed or missed a line, it ended up in the show. They didn’t treat it any differently to a regular live performance. The same cannot be said for the movie, which instead plays like what it is: a movie. There are times where they try to recreate the magic by breaking the fourth wall or keeping out-takes in, but they’re odd, forced and false. It’s like some of the magic of the show is lost in the translation to big screen. 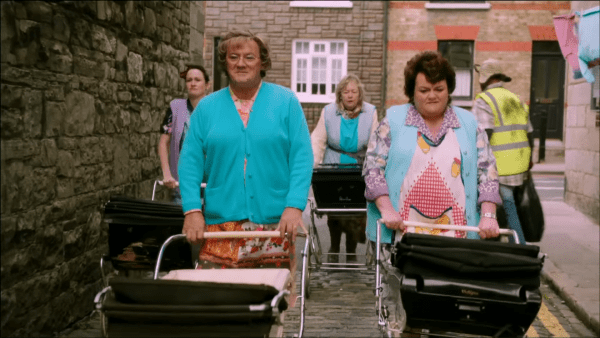 Worse still, it feels at times like they tried to add in “audience laughter” by having situations where a crowd can laugh at the lines being delivered, which feels very contrived. Having said that, it’s better than the awkward silences left between the jokes that are, at times, bereft of humour. Not every joke in the movie works and there a couple of gags that really fall flat – the blind ninjas for example. The script also feels the need to rely on “old classics” like mis-translating and mis-speaking a foreign language which are embarrassing if nothing else.

Mrs. Brown’s Boys D’Movie is not totally laugh-free however and it would just about sneak past Mark Kermode’s “six laugh test”, mostly because the character of Mrs. Brown is incredible charming. She’s sweet and innocent but has a mouth on her like a sailor and there is something genuinely funny about her swearing at people. It’s childish and immature, but it’s part of what makes her so endearing. O’Carroll does the lion share of the work as well with his family members really only serving as bit parts with only the ever reliable Winnie to help lighten the load. His secondary character (a borderline racist stereotype, but that is the point) is a failure, but O’Carroll rarely puts a step wrong with the main character’s performance.

The film does attempt to have a deeper core as it briefly delves into what makes Dublin such an attractive and ‘community-based’ town as well as the troubles faced by large families raised by a single parent. These moments are genuinely touching at times and, for a man in drag, O’Carroll really sells the plight of a single mother who didn’t have a leg to stand on. The film may not always be funny, but you can’t argue that it doesn’t have a heart. Or look at this way – it’s not as good as The Inbetweeners Movie but it’s not as bad as Keith Lemon: The Movie.